What are greenhouse gases?

We know that several gases in the atmosphere can absorb heat. These greenhouse gases are produced both by natural processes and by human activities. The primary ones are: • Carbon dioxide (CO2) • Methane (CH4 ) • Nitrous oxide (N2 O) • Industrial Gases, including hydrofluorocarbons, perfluorocarbons, and sulfur hexafluoride

Water vapor is the most abundant greenhouse gas and plays an important role in regulating the climate. Changes in water vapor from human activities such as irrigation and deforestation can directly affect temperatures at the Earth’s surface2. However, because human emissions of water vapor do not significantly change water vapor levels in the atmosphere, water vapor is not counted in the United States or international greenhouse gas inventories3.

Why do greenhouse gas levels matter?

Atmospheric concentrations of several important greenhouse gases have increased significantly since large-scale industrialization began around 200 years ago4. Fossil fuel combustion converts carbon that had been stored deep in the Earth to carbon dioxide that enters the atmosphere. Clearing land for agriculture converts carbon stored in soils and plants to carbon dioxide. Even though the most important greenhouse gases occur naturally and are important for life on Earth, burning fossil fuels and other human activities have caused a large increase in their concentrations (Figure 1). 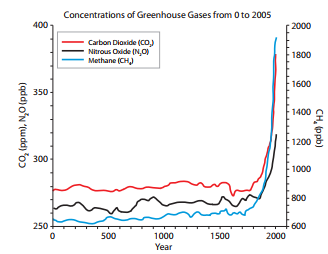 Figure 1: Atmospheric concentrations of the naturally occurring greenhouse gases carbon dioxide, methane, and nitrous oxide over the past 2000 years. Data are from ice core records and contemporary measurements4.

This all matters because there is general scientific consensus among climatologists, atmospheric chemists, and other scientists who study Earth’s systems that the increase of greenhouse gas concentrations causes a rise in the average global temperature5,6. Assessments by the independent Intergovernmental Panel on Climate Change (IPCC) note that Earth’s average global surface temperature has risen between 1.1° and 1.6° Fahrenheit over the past century and that this is very likely caused by human activity4. Although this rise in temperature does not seem like much, even small changes in the global temperature can lead to changes we notice at the local level, and warming in some places – in the Arctic, for example – is much greater than in others. Local changes include shifts in the patterns and severity of rainfall and snowfall, droughts, cloudiness, humidity, and growing season length7. These changes have the capacity to greatly affect agriculture (see MSU Extension E3149).

Global Warming Potential (GWP)4 is an index that represents the global warming impact of a greenhouse gas relative to carbon dioxide. GWP represents the combined effect of how long the gas remains in the atmosphere and its relative effectiveness in absorbing outgoing infrared heat. Table 1 lists the GWP of the three main greenhouse gases (based on a 100-year time horizon). As the table shows, a given molecule of nitrous oxide has over 300 times the impact on global warming as does a molecule of carbon dioxide.