Hemlock woolly adelgid (Adelges tsugae Annad) has been on Michigan’s “most unwanted” list for years. This invasive forest insect has killed hundreds of thousands of hemlocks (Tsuga canadensis) in eastern states. It threatens more than 170 million hemlock trees in Michigan forests, and if not controlled, it will also kill hemlock trees in landscapes.

Small, localized infestations of hemlock woolly adelgid (HWA) were recently discovered in western lower Michigan. Evidence suggests that some of these infestations are at least 10 years old and probably originated when infested hemlock trees from other states were planted in landscapes. Surveys are continuing, and additional HWA infestations may yet be found. This bulletin is designed to help you learn to recognize HWA and understand the potential impacts of this invader in Michigan. 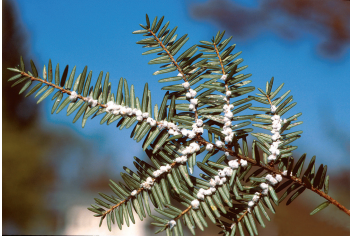 Hemlock woolly adelgids are tiny insects, less than 1/16 inch (1.5 mm) long, and typically a dark reddish brown or purplish black. They feed at the bases of hemlock needles, where the needles attach to the woody shoots. As the adelgids feed, they secrete white, fluffy strands of wax from pores on their body. This wax — called “ovisacs” — covers the adelgids, protecting the insects and their eggs from desiccation and natural enemies. The white ovisacs are most obvious from late fall to early summer, especially on the undersides of shoots. 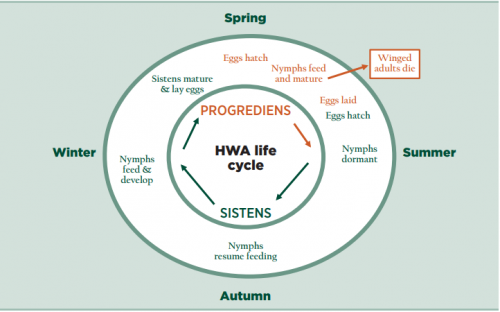 Specialized mouthparts enable the adeglid to pierce the base of a needle, then suck out nutrients from cells in the shoots of their host tree. Each adelgid inserts its long tubelike stylet through the needle and into a shoot. The stylet travels along the vascular bundle until it reaches the parenchyma cells of the xylem rays. These cells function as nutrient warehouses, storing and transferring nutrients within the tree. The adelgid uses its stylet to suck up carbohydrates and other nutrients, depleting the food reserves the tree has stored in these cells. Toxic saliva injected by the adelgids may also trigger a hypersensitive response by the tree, which slows water transport.

In North America, HWA completes two life cycles per year on hemlock trees. Reproduction is asexual — that is, all adelgids are female. In spring, a generation of adelgids called “progrediens” hatch from eggs. The crawlers (first stage) can move about on the tree until they find places to settle. Crawlers can be blown by wind to other trees and can also be transported by birds or other animals that perch on or brush against an infested tree. Most of the progrediens will settle at the base of needles on the previous year’s shoots. Once they settle and insert their long stylets into the woody shoots to begin feeding, they will not move again. As the adelgids feed, they produce the strands of white wax from special glands on their bodies. The word “progrediens” comes from a Latin word meaning “to progress.” This generation of HWA does not require a long diapause period, and development “progresses” relatively quickly to the adult stage.

A portion of the progrediens mature into winged adults, which will fly to spruce trees. In Japan, these insects feed on Asian spruce trees, causing round galls to form on the trees. In North America, however, HWA cannot feed on spruce. These individuals die without reproducing. The progrediens that remain on hemlock never develop wings, even as adults. 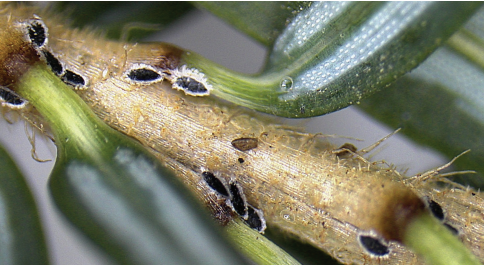 Immature HWA sistens nymphs are dormant and do not feed in summer.

In early summer, the progrediens produce eggs that will hatch into the “sistens” generation. In Latin, “sistens” refers to “ceasing or halting,” and that is effectively what happens. These eggs hatch in early to midsummer. The crawlers move about, then settle, usually on the current year’s growth. The immature sistens are dark-colored and may have a thin “halo” of white wax. Once these sistens settle, they enter into a long period of inactivity. This diapause, or aestivation period, lasts through the summer.

In autumn, the sistens resume feeding, producing white waxy ovisacs. Development proceeds slowly during the winter, but by late winter or early spring, the adelgids mature into adults. These adults lay the eggs that will hatch into the progrediens.

Adelgid development rates and the onset of egg laying vary, depending on weather conditions. Generally, sistens begin laying eggs in March inNew England, roughly one month later than egg laying begins in Virginia. Adelgid life stages often overlap in the spring and summer because of the long periods of egg laying and hatching.

Hemlock woolly adelgid biology is unusual in that the sistens feed and develop during the winter. Studies in northeastern states have shown that HWA mortality can exceed 90 percent if temperatures drop below -22° F. Winter mortality may be an important factor helping to slow HWA spread and population growth in areas of northern lower Michigan and the Upper Peninsula. It is important to remember, however, that temperatures in a forest can vary considerably, depending on factors such as exposure, aspect or height. The dense mass of white wax produced by the adelgids probably helps to protect them from cold temperatures to some degree. In addition, because all HWAs are female and two generations occur each year, if even a few adelgids survive a cold snap, the population can build up rapidly. There is also evidence that the ability to tolerate cold temperatures is a genetically linked trait that adelgids pass on to their offspring. Populations of HWA in northern latitudes in New England and New York, for example, appear to have become more cold-tolerant than HWA populations in southern states.

In trees with heavy infestations of HWA, needles become dry, and many needles will drop from affected trees. As infestations progress, trees may fail to set new buds or buds may be aborted. Over time, trees lose vigor and take on a grayish green appearance. Trees are sometimes killed by HWA in as little as four years; other trees survive HWA infestation for 10 years or more. Other stresses — such as severe drought, poor growing conditions or additional pest problems — can accelerate the rate and extent of hemlock mortality. 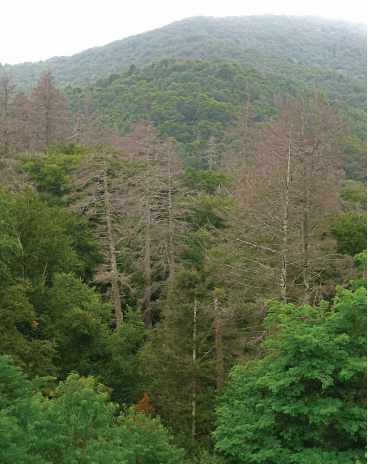 Hemlock woolly adelgid can kill hemlocks of any size.

For example, the elongate hemlock scale (Fiorinia externa Ferris) is another invasive pest that has recently become established in some areas of Michigan. This sap-feeding insect can co-occur on trees with HWA infestations and may accelerate the rate of tree decline. Defoliation by the native hemlock looper (Lambdina fiscellaria [Guenée 1857]) or the invasive gypsy moth (Lymantria dispar L.) will also stress hemlocks and hasten decline.

Options for HWA Control and Management

A considerable amount of research on methods to control HWA and protect trees has occurred in the eastern United States over the past few decades. Landscape trees can be effectively protected from HWA with systemic insecticides containing imidacloprid or dinotefuran. These products are typically applied as a soil drench or basal trunk spray, or via trunk injection in the fall or early winter. Many products are available to certified pesticide applicators, and a few products can be purchased and applied by homeowners. Dinotefuran moves into and through hemlock trees relatively quickly, making it an ideal choice for rapid control of HWA, especially on large, old trees. Dinotefuran, however, must be reapplied annually. Imidacloprid moves slowly through hemlock trees but will persist for at least 3 to 5 years. Forest pest managers in several eastern states often recommend applying both products as a tank mix to protect valuable hemlock trees. With these and other systemic insecticides, trees must be treated while they are still healthy enough to transport the product up the trunk and into the canopy. Landscapers, arborists and others who prune, trim or fell hemlock trees should be especially careful to dispose of this material and clean their equipment to avoid spreading HWA into new areas. 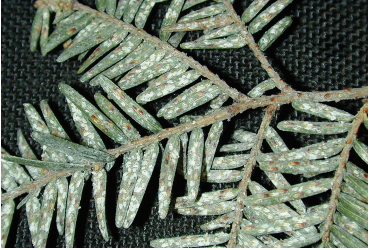 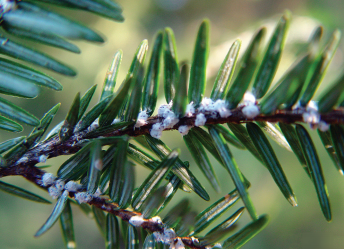 Of course, the millions of hemlock trees in forests cannot be protected with systemic insecticides because of costs and environmental concerns. Efforts to identify, rear and introduce biological control agents to suppress HWA populations in forests have been underway for at least 20 years. Tiny predatory beetles native to Japan or the Pacific Northwest are being studied in eastern states. One or more of these species could eventually be considered for release in Michigan if HWA populations spread. 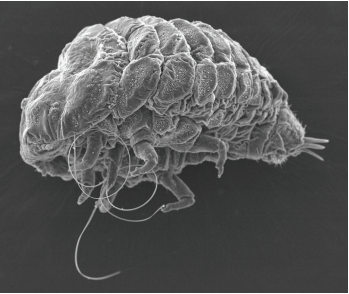 Wax was removed from this adult HWA, photographed at very high magnification.

If hemlocks grow on your property or if you manage hemlock trees in forest or landscape settings, periodically check the shoots for evidence of HWA. If you suspect a tree may be infested, please collect digital images of infested shoots and the tree(s). Also, be sure to note the location of the affected tree(s). Contact the Michigan Department of Agriculture and Rural Development by phone at 800-292-3939 or by email at MDA-Info@michigan. gov. You can also contact the Plant Pest Diagnostic Clinic at Michigan State University by phone at 517- 355-4536 or by email at pestid@msu.edu. 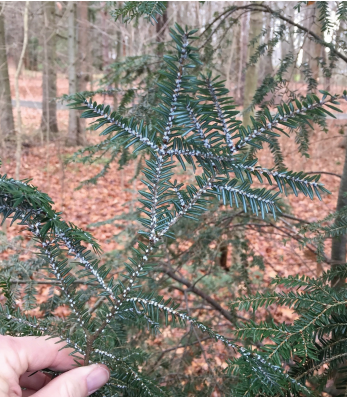 A shoot from a heavily infested tree in Michigan.

Additional information on HWA is available on the Midwest Invasive Species Information Network (MISIN) website at http://www.misin.msu.edu/. Other good sources of information include HWA websites hosted by the USDA Forest Service and several universities.