The Japanese beetle, Popillia japonica Newman, is a native of Japan. It was first found in the United States in New Jersey in 1916. Since then, it has gradually spread westward and has been reported in every state east of the Mississippi River. Individual beetles were collected in Michigan in the 1930s, although the insect did not become established in the Detroit area until the early 1970s. Japanese beetle can be found in most locations south of a line from Muskegon to Bay City. It has recently been found in Traverse City and a few other sites in the northern Lower Peninsula.

Japanese beetle larvae can cause serious damage to golf course fairways and occasionally to home lawns. It normally is not a problem of non-irrigated turf. However, with frequent rain in July and August, the adults will readily lay eggs in non-irrigated turf. The adults are voracious feeders that damage a wide variety of ornamental shrubs and trees. If the local population is high enough, the most susceptible hosts, such as lindens and roses, can be completely defoliated. Japanese beetle is also a quarantine concern to commercial growers. Sod, soil or nursery stock must be certified as free of Japanese beetle if it is going to be shipped to states without Japanese beetle. 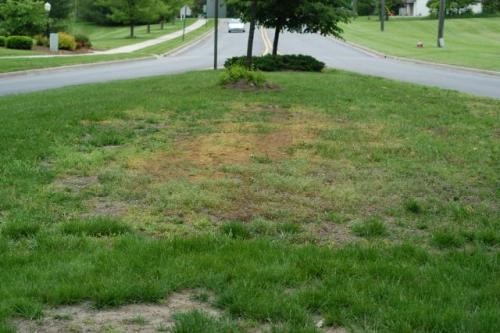 Japanese beetle grubs are actively feeding on grass roots from April to the end of May and from August to November. The larvae prune off the roots, causing the turf to have difficulty maintaining water uptake. Damage becomes evident during droughty periods and is typically observed in the fall if larval numbers are high. A secondary concern is skunks, raccoons, crows and geese feeding on the grubs. They can tear up large patches of turf as they dig for the grubs.

The adults emerge in early July and feed on the leaves of nearly 300 species of susceptible plants. The most favored include apples, cherries, grapes, peaches, plums, blueberries, asparagus, beets, broccoli, rhubarb, snap beans, sweet corn, soybeans, birch, crabapples, hollyhocks, linden, maples, mountain ash, roses and sassafras. Adult beetles feed on the top of the leaf, eating the tissue between the veins, leaving the leaves skeletonized. If populations are high, they can remove all of the green leaf material from the plants. 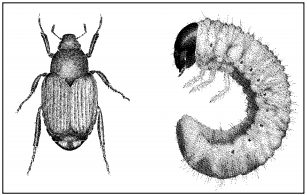 Adults are 3/8 to 1/2 inch long. The thorax is green and wingcovers are metallic reddish brown. There are five tufts of white hairs on both sides of the abdomen and a pair of tufts on the end of the abdomen. The legs and head are black. The larvae are white C-shaped grubs varying from 1/8 inch when newly hatched to about 1 inch when fully grown. Eggs are laid in early July through September on turf. The larvae hatch about 10 days later and begin feeding on the grass roots. If adequate moisture is available from rain or irrigation, the grubs will molt to second and then third instars by mid- September. The grubs dig deeper into the soil to avoid the frost as temperatures drop in the fall. The grubs move back up to the grass roots in April and begin to feed again. The larvae pupate in early June. Adults emerge between late June and the middle of August. In a normal year, most of the adults emerge in July. They tend to gather in large numbers on shrubs and trees after emerging and can often be found congregating in balls of a hundred or more beetles on the turf. 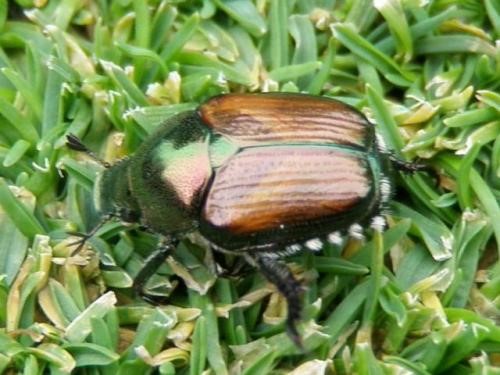 Japanese beetle adults are a common sight during the summer.

Traps baited with a pheromone and a floral bait are commercially available at many lawn and garden stores. These are useful to determine when adults are beginning to emerge to help time chemical applications to reduce adult feeding damage. These traps also will help give some indication of the severity of the population in an area. Because the traps tend to attract Japanese beetle adults from the surrounding area, they may contribute to damage to nearby ornamentals and turf by attracting beetles to the vicinity of the trap. Although the traps are often sold as a control measure, it is not likely that trapping will reduce the population unless very large numbers of traps are used.

A product available in Michigan contains a bacterial spore that is supposedly effective in reducing Japanese beetle populations. There has been little evidence presented in the scientific literature over the past two decades that indicates any milky sporecontaining products work. More research is needed to demonstrate the efficacy of milky spore products before we can recommend them for grub control. 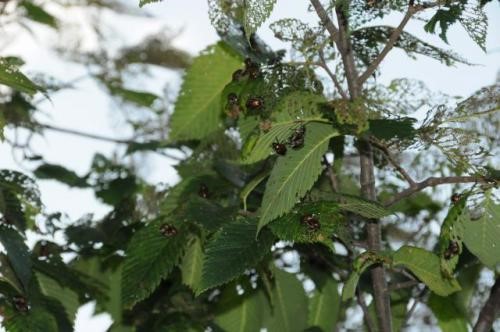 Adult beetles can be found "congregating" on trees and turf in July.

Low-maintenance turf will tolerate five to 10 grubs per square foot; high-maintenance turf, 15 to 20. Irrigation during the fall and spring is the best way to avoid turf damage and loss. Nonirrigated turf can tolerate fewer grubs if periods of drought occur in the fall or spring. Irrigation during late June and early July may make a particular area more attractive to egg-laying adults, however.

The presence of adult Japanese beetles in July is not an indication that turf damage will occur. If Japanese beetle is new to an area, it is important to sample for larvae before deciding to apply insecticides. Dig up a square foot of turf in several places in the yard after the first of September to see if grubs are present in high enough numbers to cause damage. Also watch and sample around thinning patches in the lawn and near any skunk, raccoon or crow damage. Curative insecticides containing the active ingredients trichlorfon or carbaryl can be applied from August 15 to October 30 or March 15 to May 30 if grub number are high. Sprayable insecticides should be followed by 1/2 inch of irrigation to move the insecticide into the soil. A coffee mug can be used to measure the amount of irrigation applied. Granular treatments are more practical for low-maintenance turf. If a history of grub damage exists in an area, a preventive insecticide application may be the best option.

Preventive insecticides containing the active ingredients imidacloprid, halofenozide, thiamethoxam or clothianidin should be applied between July 1 and July 15 for optimum control. Preventive compounds do not work well after August 15.

Adult control can be frustrating. If the population is high, insecticide applications may need to be made on susceptible plants every four to seven days while adults are active. When the leaves of susceptible plants are damaged, they give off chemicals that make them much more attractive to Japanese beetle attack. As plants are replaced or added to landscape plantings, highly susceptible plants should be avoided. Sprayable products containing the active ingredients carbaryl, bifenthrin, cyfluthrin, lambda-cyhalothrin or permethrin are the best choices for adult control.