As one of the world’s most popular nut-bearing trees, the chestnut offers unique qualities. Fresh chestnuts contain vitamin C and are much lower in fat than other common nuts. Consumers may be surprised to learn that chestnuts contain twice as much starch as the potato, earning the chestnut tree the nickname “bread tree” in some regions of the world. Chestnut acreage in the U.S. has increased substantially over the past 30 years with Michigan boasting the largest amount of growers and acreage in the country. Shoppers can find chestnuts in the fall at grocery stores specializing in locally grown produce and at local markets in areas of the state where tree-fruit production is prevalent.

Chestnut species also grow naturally in the landscape. People plant chestnut trees in green spaces as ornamentals as well as in orchards for nut production. Edible chestnuts found in Michigan include the American chestnut, Chinese chestnut, Japanese chestnut, European chestnut and the chinquapin. The term “horse chestnut” is sometimes used to describe an unrelated tree in the genus Aesculus. Trees in this genus may also be referred to as “buckeyes.” Trees in the genus Aesculus produce toxic, inedible nuts. These trees are planted as ornamentals throughout the U.S., and consumers should be aware that the nuts are sometimes incorrectly represented as edible. 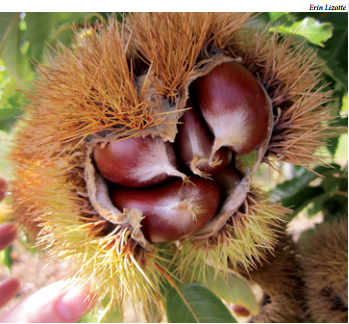 Colossal chestnuts in the burr. Colossal is a popular French varietal that consumers may find at local markets.

The value of a chestnut is based primarily on its size with larger nuts garnering a premium price and being sold fresh in the shell. The smaller nuts may be peeled and frozen for soups and sauces or used to produce niche products including chestnut chips and slices.

Chestnuts require a two- to three-week curing process to achieve maximum quality and sweetness. Chestnuts purchased from the store should have already undergone the curing process and should be ready for immediate use. When purchasing chestnuts from a roadside market, ask if they have been cured. When collecting at a U-pick operation, you’ll need to cure them yourself.

During the curing process, the chestnut converts from a bland starch to a sugar, resulting in a sweeter chestnut. You can accomplish this conversion process quickly by storing chestnuts at room temperature for a few days. However, with this method, they will dry out so quickly they will not last long. The best way to cure chestnuts is to take the time to store them just above freezing in your refrigerator for at least two weeks. This longer, refrigerated curing process will increase their shelf life. The recommended temperature range is 32 to 40 °F with the lower temperatures delivering the best results.

When purchasing chestnuts, be sure the store or market stores them in a chilled environment for maximum quality. When selecting chestnuts, inspect them carefully. The space between the shell and the kernel can reveal the quality of the chestnut. If you cannot pinch or push the chestnut shell even slightly against the kernel, then it needs more curing time. You can eat a chestnut at this stage in the curing process but it would not be as sweet as it could be. On the other hand, if the space between the shell and the kernel is too large, the chestnut has dried too much or it’s old and the taste will be compromised. If you feel a slight give when you pinch the chestnut, then it’s about perfect. 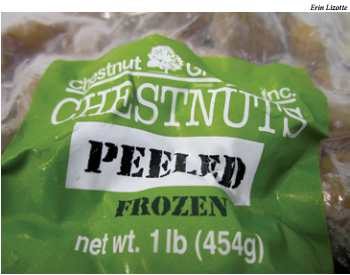 Keep fresh chestnuts cold without freezing them. Due to their sugar content, chestnuts do not freeze until 28 °F or below. To prevent freezing, store them in the produce compartment of your refrigerator where well-cured chestnuts can last for a few weeks. Ideally, place them in a plastic bag with holes made with a fork or knife to help regulate the moisture levels. If the temperature drops below 28 °F and the nuts freeze, they will be inedible within a day or two. If storing frozen, use right after thawing. 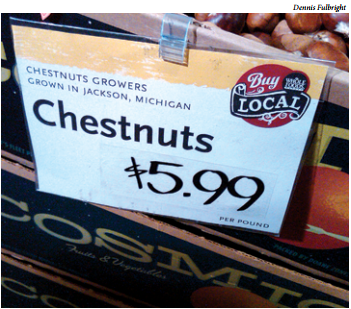 Fresh chestnuts in the shell at a store.

The most recognizable and simple method of chestnut preparation is roasting. You can roast chestnuts in the oven, over a fire or even in the microwave. To roast chestnuts, be sure to score through the shell with a knife to ensure steam can escape, and to prevent a messy and loud explosion. Oven roasting generally takes around 20 minutes at 300 °F. Microwaving can take as little as 2 minutes. Cooking times vary by microwave and oven so you may need to experiment. You can also try roasting them over an open fire though technically nestling them in the embers is best to prevent scorching. Depending on the temperature of the embers, this process can take anywhere from 15 to 30 minutes. Cooked nuts should be tender, sweet and peel easily. Allow cooked chestnuts to cool before handling.

Chestnuts aren’t just for roasting. Chefs around the world recognize their unique characteristics and produce delicious soups, pastas and spreads using this special nut. Search online or in cookbooks to see how you can use this local food in your recipes.