What is Perennial Wheat?

Perennial wheat, a new crop under development at the time of this writing, has the potential to be used as a multi-purpose crop. Farmers can grow it for grain and fodder as well as make use of its environmental benefits that reduce erosion and improve water quality (Glover et al., 2010). Plant breeders developed perennial wheat through several crosses with annual wheat (Triticum aestivum) and perennial grasses such as Thinopyrum intermedium (intermediate wheatgrass) and other species related to wheat. Researchers selected this new crop for its perennial growth habit and ability to exhibit grain characteristics similar to that of the annual wheat parent. Perennial growth habit refers to the regrowth of the plant at the crown for several years after grain is harvested, providing multiple grain harvests without having to sow each year. Perennial wheat is a non-GMO (genetically modified organism) developed through traditional breeding methods, with the majority of its genetic makeup that of annual wheat. 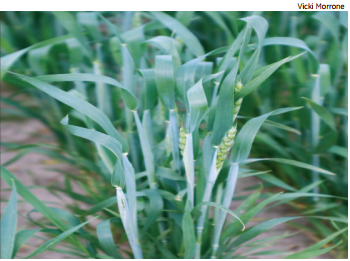 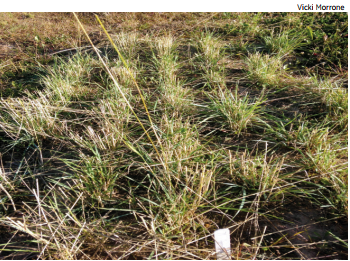 Perennial wheat in the first year of growth (left photo) and regrowth (right photo) after harvest.

The perennial wheat lines developed so far lack uniformity, and few are strongly perennial so they do not always regrow under Michigan conditions. The plant exhibits a range of seed-head types, seed sterility and other characteristics that indicate that the lines are from unstable populations. Perennial wheat breeders are working on developing improved lines at Washington State University and the Land Institute in Salina, Kansas.

Over several years, Michigan State University (MSU) researchers have measured grain yield of the available lines of perennial wheat (Figure 1). The most promising lines regrew most years at the W. K. Kellogg Biological Station (KBS) in southwestern Michigan, with the grain yielding about half that of annual wheat. At the Australian research site at Charles Sturt University in Wagga Wagga, researchers tested these perennial wheat lines and found the yields of perennial wheat remained similar to what the research team observed in Michigan, yet their annual wheat yields were much higher than achieved in Michigan (Hayes et al., 2012). Clearly, new lines of perennial wheat need to be developed – ones that can compete economically and offer stronger perennial qualities.

Figure 1. Four of the most promising perennial wheat lines growing at the W.K. Kellogg Biological Station (KBS) in southwestern Michigan. 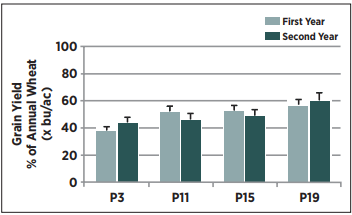 Perennial wheat yields in the first year and the second year (after regrowth) for four lines (P3, P11, P15 and P19) from the Washington State University breeding program. The yields are from small plots grown at KBS, with perennial lines showing about 40 to 60 percent of the yield potential of annual wheat (Jaikumar, Snapp, Murphy, & Jones, 2012).

The mineral concentration of perennial wheat is higher than that of annual wheat, making it attractive for baking as shown in work at Washington State University led by Dr. Kevin Murphy (Murphy, Hoagland, Reeves, Baik, & Jones, 2009). However, baking quality is variable in the current lines. Low grain yield makes this a questionable crop but a combination of its ability to produce forage as well as grain, and its environmental value, offer useful attributes for a perennial crop. Preliminary research at KBS has produced some promising results. 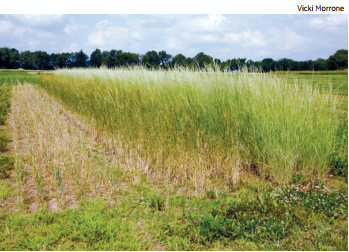 Field plots comparing various perennial grains: In this photo of grains growing at the Kellogg Biological Station in southwestern Michigan, annual wheat is on the left, perennial wheat is in the middle and intermediate wheatgrass (“Kernza”) is on the right.

Perennial wheat shows the potential to be a multi-purpose crop with strong environmental benefits. A field experiment initiated at KBS in 2009 demonstrated that perennial cereal cultivation leads to improved water quality by preventing nitrate from leaching in both heavily fertilized and organically managed soils (Culman, Snapp, Ollenburger, Basso, & DeHaan, 2013). (See Figure 3). Researchers expect growing perennial wheat or other perennial cereals such as intermediate wheatgrass to contribute to soil building but this has not yet been proven. The potential for dual use of perennial wheat as a forage and a grain crop is an exciting area of research initiated with an MSU field experiment in which perennial wheat was cut in the spring to simulate harvest of a forage (Tinsely, 2012). Preliminary results show forage was harvested without reducing the following grain crop. However, regrowth was impaired, and the current perennial wheat lines available fail to exhibit vigorous regrowth.

Another potential benefit from perennial cereals is to use the lines that show disease resistance in breeding programs to develop new varieties of annual wheat. To identify possible lines of resistance, a greenhouse study was carried out to test multiple lines of annual and perennial wheat for resistance to Fusarium Head Blight (FHB) (Figure 2), an economically important wheat disease in the northeastern United States. 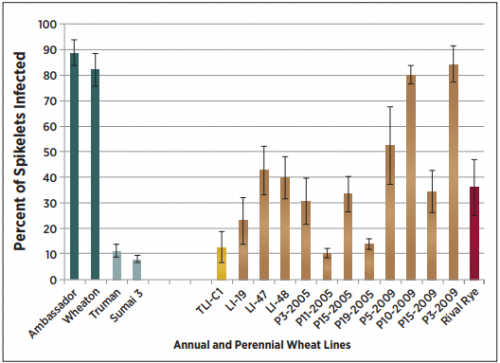 After four years of growing this grain in Michigan, researchers have identified several production challenges. They have observed poor regrowth of the plants following grain harvest. The poorest regrowth occurred at KBS on infertile soils; very few perennial wheat plants regrew in the hot, dry growing seasons of 2010 and 2012. Regrowth was good in 2011 when rainfall was adequate, and the spring forage production the following year was good (Tinsley, 2012). Weed management has also been a problem, as the plants die back after grain is harvested, weeds invade the field during the month before the perennial wheat starts to vigorously regrow. Perennial grain has potential, but there are tradeoffs in terms of services and challenges associated with the currently available genetics (Figure 3). Before this grain can be promoted commercially, additional breeding is needed to identify lines with perennial vigor and stable traits.