Of the more than 400 identified species in the genus Streptomyces, only a fraction are considered plant pathogenic. Common scab may be caused by several soil-dwelling plant pathogenic bacterial species in this genus, including S. scabies and  S. turgidiscabies. In particular, S. scabies has been well documented in causing scab lesions. Streptomyces scabies  infects a number of root crops, including (Raphanus sativus), parsnip (Patinaca sativa), beet (Beta vulgaris) and carrot (Daucus carota), as well as potato (Solanum tuberosum). The disease occurs worldwide wherever potatoes are grown. Common scab does not usually affect total yields, but the marketplace for potatoes is quality driven, so the presence of scab lesions, especially those that are pitted, significantly lessens the marketability of both tablestock and processing varieties.

The symptoms of potato common scab are quite variable and occur on the surface of the potato tuber. The disease forms several types of corklike lesions – surface (Fig. 1), raised (Fig. 2), and pitted lesions (Fig. 3). Sometimes surface lesions are also referred to as russeting, particularly on round whites, because the general appearance resembles the skin of a russet-type tuber. Pitted lesions vary in depth, although on average they extend 1/8 inch deep. The type of lesion formed on a tuber is thought to be determined by a combination of host resistance, aggressiveness of the pathogen strain, time of infection and environmental conditions. 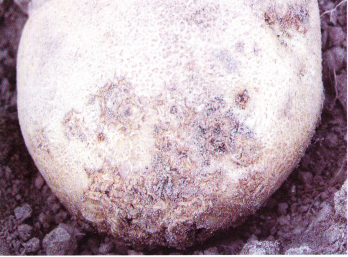 Figure 1. A tuber infected with common scab. Corklike lesions form on the surface of the tuber. 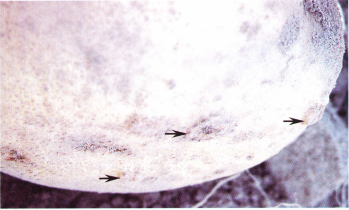 Figure 2. A tuber infected with common scab. The disease may form raised corklike lesions on the surface of the tuber (arrows). 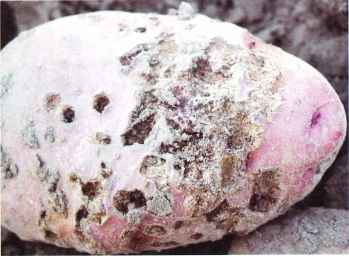 Figure 3. Along with surface and raised corklike lesions, common scab may form pitted lesions, which may be 3 to 4 mm deep.

Scab symptoms are usually first noticed late in the growing season or at harvest. Tubers are susceptible to infection as soon as they are formed. Lesions start out as small brownish spots, which enlarge into water-soaked circular lesions within a few weeks of infection. These circular lesions may coalesce, forming large scabby areas (Fig. 3). Scab is most severe when tubers develop under warm, dry soil conditions with a soil pH above 5.2 (Fig. 4). Common scab is greatly suppressed in soils with a pH of 5.2 or lower. However tubers grown in acidic soil may develop scab-like lesions. These may be due to acid scab, a similar disease to common scab caused by the related pathogen S. acidiscabies. The acid scab pathogen can grow in soils with a pH as low as 4.0. Acid scab and common scab are hard to differentiate – lesions caused by S. acidiscabies are similar to those caused by S. scabies. 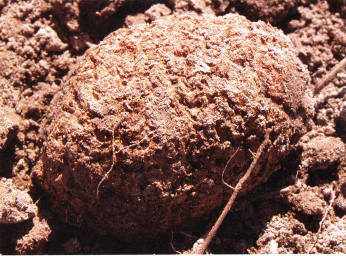 Figure 4. ln severe cases of common scab, lesions may cover the entire surface of the tuber.

Common scab of potato is an efficient saprophyte that can overwinter either in soil or on the surface of tubers and crop residues. The pathogen is spread from one location to another by splashing water (irrigation or rain) and wind, and on seed tubers and farm equipment with leftover soil residue. Most soils where potatoes are grown in Michigan have a resident population of S. scabies. The population may be reduced by rotation with grain crops or other non-hosts but cannot be eliminated entirely because it reproduces to some extent on organic matter in the soil.

Streptomyces scabies has branced mycelium. Its spore-producing hyphae develop into corkscrew-like spiral chains with cross walls that eventually constrict and break off into individual spores. As spores mature, they develop a gray or melanized pigmentation. When a spore comes into contact with a suitable host, it will germinate and the infection process begins.

The optimum temperature for infection of potato tubers by S. scabies is 68 to 72 degrees F, but the pathogen can attack tubers in the soil with a wide range of temperatures, form 50 to 88 degrees F. Infection usually begins at the onset of tuberization. The pathogen primarily invades lenticels but will take advantage of any open wound on the surface of the potato tuber. After penetration, the pathogen can grow through up to three peridermal cell layers, causing the cells to die. The bacterium then feeds on these cells saprophytically. The pathogen also secretes a compound that promotes raped cell division in the living cells surrounding the lesion. This causes the tuber to produce several layers of cork (suberized) cells that isolate the bacterium and the surrounding tuber cells. As the tuber cells above this suberized layer die, the pathogen feeds on them. As the suberized layers are pushed out and sloughed off, the pathogen grows and multiplies in the additional dead cells. This growth cycle may occur several times throughout the growing season, enlarging the lesion. Lesion size will also vary depending on when infection occurs. Generally, the earlier a tuber becomes infected, the larger the lesion.

No single measure provides effective control of scab, but the disease can be managed using an integrated approach that combines the use of host resistance and cultural control methods. Chemical control methods have met with limited success. 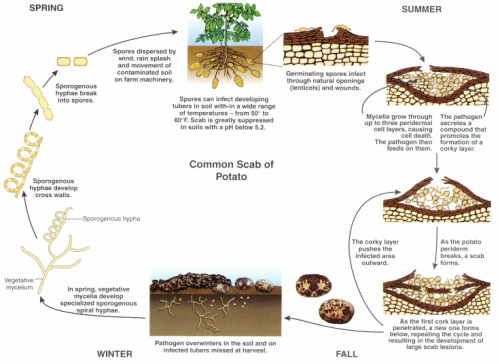 Several factors are known to influence scab disease severity: soil moisture, soil acidity, soil type and amendments, and crop rotation. Soil moisture during tuberization has a dramatic effect on common scab infections. Irrigation has been used to manage this disease since the early 1920s.  Maintaining soil moisture levels near field capacity during the 2 to 6 weeks following tuberization will inhibit infection. Irrigation may not always be the most practical method, especially on soils with low water-holding capacity. Furthermore, other disease problems, such as Pythium leak and pink rot, may be aggravated by excessive irrigation.

Soil amendments – including manure, lime and cover crops – have produced inconsistent results for the control of scab. Streptomyces spp. are generally involved in the decomposition of organic matter and are therefore thought to be stimulated by its presence. Thus, if possible, it is best to avoid light-textured soils and those with high levels of organic matter.

Crop rotation is important in the control of common scab because it reduces the levels of inoculum in potato fields. However, S. scabies can survive for many years in the absence of potatoes because of its ability to live saprophytically and infect other plants. It has been reported on many fleshy root vegetables, such as beets, carrot, radish and turnip. Rotation with small grains or alfalfa appears to reduce disease in subsequent potato crops.

Chemical and antimicrobial compounds have been used to control common scab with varying degrees of success. Chemical treatments such as 3, 5-dichlorophenoxyacetic acid (3, 5-D, Telone) tend to cause plant injury. A few antimicrobial compounds have proved effective, but none are registered for use in the United States. The chemical pentachloronitrobenzene (PCNB), also known as Blocker (Amvac) has been tested, and although it has demonstrated some degree of success, studies have indicated that using it at higher concentrations (20lb/A) can cause a decrease in tuber size or yield. Pic-plus (chloropicrin) has shown some efficacy in trials in Michigan and Ontario but more so in Florida. The activity of chloropicrin and application requirements such as minimum soil temperatures (above 45 degrees F) and 30-day interval post-application planting restriction would require fall application in Michigan in most seasons.