Pink rot of potato is an important soil-borne storage disease of potatoes worldwide. The disease is usually associated with high soil moisture when tubers are approaching maturity and is a serious problem in poorly drained soils. Although the disease is found predominantly in wet fields, it can also develop in sandy soils without excessive moisture. Pink rot was first reported in the United States in Maine in 1938 and has become widely distributed in North America. Potato growers refer to the disease as “water rot” without distinguishing the pathogens involved. The name “pink rot” describes the pink color that develops in infected tuber tissue when tubers are cut and exposed to air for 15 to 30 minutes (Fig. 1). Pink rot is a serious problem in storage, and high humidity along with poor ventilation can cause heavy losses of stored potatoes. Pink rot infection is usually associated with secondary infection by anaerobic soft rot bacteria (Fig. 2).

Diseased plants are first observed in poorly drained parts of the field. Disease symptoms, mostly characterized by stunning and wilting, appear on the potato vines late in the growing season. Wilting starts from the base of the stem and progresses upward, causing leaf yellowing, drying and defoliation. Vascular discoloration and blackening of the underground stems may also be observed. Similarly, roots may turn brown to black, and occasionally aerial tubers may develop.

Symptoms on tubers are more obvious and characteristic of the disease. Tuber decay begins at or near the stem or stolon end of the tuber. Infected tissue becomes rubbery but not discolored in the early stages of infection, and when infected tubers are cut open, the rotted portion is delimited by a dark line, visible through the tuber skin (Fig. 3). The tuber skin (periderm) over the rotted portion is light brown in white-skinned cultivars. Pink rot is not a slimy soft rot, and rotten tissues remain intact but spongy. When rotten tubers are cut open, the internal tissues are cream-colored and usually odorless. The tough, leathery, rubberlike texture of infected tubers distinguishes pink rot from bacterial rot disease in which the diseased tissue becomes soft and pulpy and contains numerous cavities. However, infected tissues are easily invaded by secondary pathogens, such as soft rot bacteria (Pectobacterium spp.), which produce the slimly symptoms often found in potatoes with pink rot (Fig. 2). As tubers are exposed to the air, the color of the infected tissue progressively changes from cream to salmon pink within 15 to 30 minutes (Fig. 1). After about one hour, the tissue gradually turns brown and then black. If the cut tuber is squeezed, a clear liquid may ooze out of the cut surface. 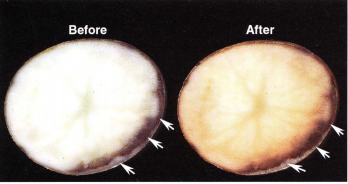 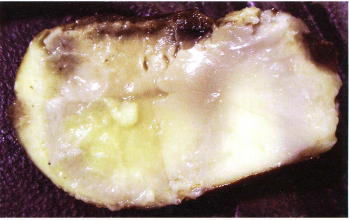 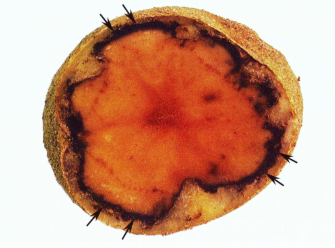 Figure 3. In the early stages of pink rot infection, the rotted portion of the tuber is delimited by a dark line.

Phytophthora erythrosepica, the causal agent of pink rot, is a soil-borne pathogen that produces thick-walled sexual spores called oospores that can survive and persist in the soil for up to 7 years (Fig. 4). Soil-borne oospores are the primary source of inoculum for pink rot in potato. Transmission by infected seed tubers has always been considered of minor importance because rapid rotting and decay of tuber tissue during storage will exclude these tubers from being used as planting material. However, the surface of healthy tubers may be contaminated with oospores that can be transferred to new locations. Oospores formed in infected tubers that were missed during harvest and remain unfrozen over the winter (volunteer potatoes) or in cull piles will end up in the soil after deterioration of the tubers (Fig. 5). The pathogen can also be transferred to new fields in infested soils carried on farm machinery and bins. Within an infested field, oospores are likely to spread when soil is moved around during cultivation. Irrigation water is also an important source of movement of the oospores from one location to another within a field and among nearby fields. Pink rot may also spread from tuber to tuber in storage. 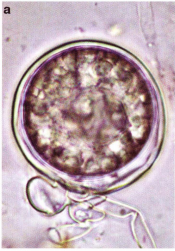 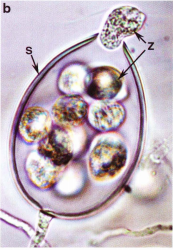 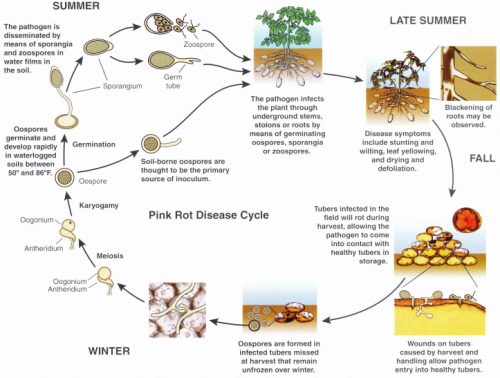 Phytophthora erythroseptica develops rapidly at soil temperatures from 50 to 86 degrees F. However, the optimal temperature for infection is 77 degrees F. The pathogen usually infects tubers through stems below soil level and stolons. In warm, wet conditions, oospores of P. erythroseptica will germinate and produce the asexual stage of the pathogen, which consists of mycelia and sporangia. Infection occurs when germinating oospores, sporangia or zoospores penetrate the epidermis of underground portions of the plant. Sporangia are the secondary source of inoculum for dispersal of the pathogen in the field or storage. Sporangia germinate, producing either a germ tube that can penetrate and infect new tubers or zoospores. Zoospores swim freely in water films, attach to the host surface, encyst and infect the plant. Roots, stem bases, stolons and tubers may become infected. In waterlogged soils, infection can also occur via tuber eyes and lenticels. Disease incidence is usually higher in waterlogged areas of a field.

Although initial infection occurs during the early stages of tuber development, the disease becomes most apparent during harvest. Tubers infected with pink ro t in the field will rot during harvest and handling, allowing the pathogen to come into contact with healthy tubers. Wounds and bruises on tubers caused by harvesting and handling provide entry points for the pathogen into healthy tubers, and thus post-harvest rotting is usually more severe than field infection. In moist storage conditions with poor ventilation, the disease spreads rapidly.

No single control measure will provide effective control of pink rot, but the disease can be managed using an integrated approach that uses host resistance and cultural and chemical control methods.

One of the most successful and important approaches to pink rot control is to reduce the amount of inoculum in soil by removing crop debris and volunteer and cull potatoes from the field. Crop rotation with non-host plants can also reduce the amount of inoculum in the soil. A 3- to 4-year rotation including legumes is useful to reduce the buildup of P. erythroseptica inoculum in the soil. Soil moisture management is also an effective approach to the management of pink rot. The following cultural practices are also suggested to prevent and reduce the incidence of pink rot:

Most commercially grown potato cultivars in the United States are considered to be susceptible to pink rot. Breeding to develop potato cultivars that are resistant to pink rot has been limited because of the endemic nature of the disease and the relative success of chemical control with compounds such as metalaxyl in the 1970s and ‘80s. However, surveys conducted recently in the United States have shown that metalaxyl-resistant isolates of the pathogen are now widespread. Therefore, integrated disease management is becoming increasingly important because of the failure of chemical control.

Chemical control options for pink rot are limited to a few compounds. Fungicides containing metalaxyl and mefenoxam were used effectively to control pink rot in the 1990s. Metalaxyl is the active ingredient in Ridomil, and mefenoxam is in Ridomil Gold (Syngenta Corp.), Ultro Flourish and Flouronil (Nufarm Co.). As mentioned above, however, metalaxyl-resistant isolates of P. erythroseptica are now widespread, and this may lead to failure of these chemicals to control pink rot. Studies at Michigan State University on the efficacy of metalaxyl/mefenoxam-based products have been largely inconclusive, so the use of these products is no longer recommended for pink rot control.

The rapid development of metalaxyl and mefenoxam resistance among populations of Phytophthora spp. as well as in P. erythroseptica populations in some locations suggest that continuous use of mefenoxam compounds will eventually lead to failure of chemical control of pink rot and necessitate finding alternatives to these compounds.

An alternative to nefenoxam is Phostrol (Nufarm Americas Inc.). In recent studies, Phostrol showed some promise for controlling pink rot. The compound is composed of mono and dibasic sodium, potassium and ammonium salts of phosphorous acid. Phosphorus acid has some systemic activity and inhibits the growth of Phytophthora spp. The exact mode of action of this compound is not fully understood. Phostrol may be applied as a foliar or a post-harvest treatment to tubers entering storage and also has activity against potato late blight.

Few fungicides are available currently to control pink rot, so it is necessary to keep these fungicides effective for as long as possible. It is important to avoid the buildup of fungicide-resistant populations. This can be achieved by integrating all methods available for management of this disease, especially the use of cultural methods, and by following the guidelines laid out by the Fungicide Resistance Action Committee (http://www.potatodiseases.org/pdf/Fungicide-Resistance-Management.pdf).

Potential survival of potato volunteers in Michigan in 2021