Potato early die complex is an annual production concern for commercial potato growers and is one of the most economically devastating disease complexes in Michigan potato production. The disease can completely compromise plant health and drastically decrease marketable yield. Verticillium dahliae Kleb is a soilborne fungus that infects the potato plant through the root system and is implicated as the primary causal agent of potato early die. The potato root is also a host to the root-lesion nematode (Pratylenchus penetrans). Verticillium dahliae in conjunction with the root-lesion nematode make up the potato early die complex; however, researchers hypothesize that other soilborne pathogens may contribute to the complex (Powelson & Rowe, 1993).

While potato early die can occur from infection with V. dahliae alone, earlier onset occurs when both the fungus and the nematode are present. The presence of potato early die complex in a potato cropping system can lead to as much as a 50 percent decline in yields. As the disease develops during the season, it tends to be most severe during the tuber-bulking period. The diseased plants are unable to generate significant tuber size, decreasing total marketable yield and quality.

Potato early die is also known as Verticillium wilt, named for the wilting symptoms that appear once the plant is infected by the fungus. The disease is characterized by the decline of plants many weeks earlier than normal maturity (Figure 1). No specific symptoms are used to diagnose infection but foliage will show chlorosis, most prominently on the lower leaves. Individual stems will begin to yellow and eventually die (Figure 2). Upon cutting the stem open, you will see a brown vascular discoloration (Figure 3). In severe cases of Verticillium wilt, stem end discoloration will be present in tubers (Figure 4). Though all of these symptoms can be reliable indicators of Verticillium wilt, none are definitive diagnostic tools because these symptoms are often associated with other potato diseases (e.g., Fusarium wilt or early blight) or abiotic stress. Occurrence of Verticillium wilt in a crop may be observed in widely scattered individual plants or groups of plants showing early die symptoms (Figure 5). 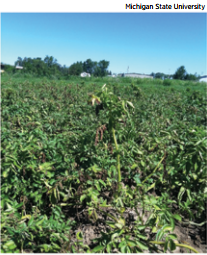 Figure 1. Early senescence due to infection by Verticillium dahliae. 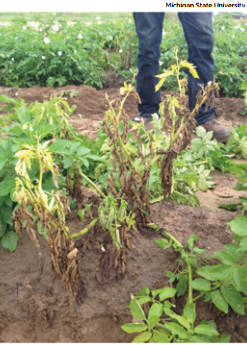 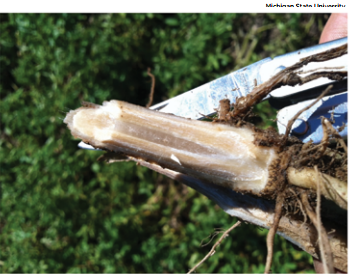 Figure 3. Mycelium will plug the xylem causing the vascular tissue to turn brown and display a wood-like appearance. 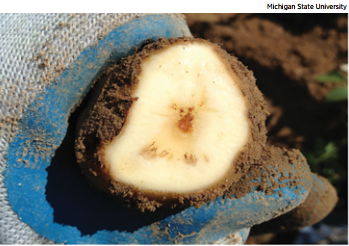 Figure 4. In plants that display severe symptoms of Verticillium wilt, tuber stem-end discoloration can be seen. 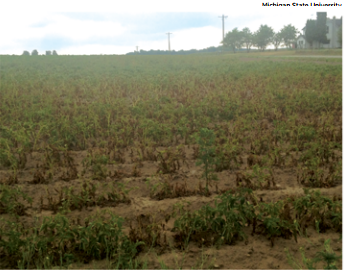 Potato early die complex is caused by the fungus Verticillium dahliae Kleb. Verticillium dahliae has a wide host range including bell pepper, eggplant, mint, potato and tomato. Verticillium dahliae produces microsclerotia (Figure 6) in the xylem of infected plants. After senescence and vine death, microslcerotia survive for up to 10 years in the soil. In Michigan, the fungus survives over winter in infested plant debris and soil. In the spring, root secretions stimulate microsclerotia germination and the fungus penetrates the root tips directly or through wounds caused by root-lesion nematodes. Once the fungus enters the root, it colonizes the root cortex and mycelium can enter into xylem vessels (Figure 7). After the fungus has entered the xylem it moves through the vascular system as conidia. As the fungus colonizes the vascular system, chlorosis, necrosis and foliar wilting begin to occur. 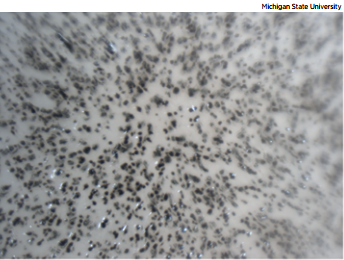 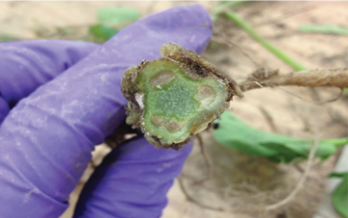 Figure 7. Once the fungus enters through the root cortex, mycelium begins to plug the vascular system of the plant.

As the tissue senesces and eventually dies, the dead tissue provides a suitable environment for the development of new microsclerotia. During the fall, the plant eventually dies. Microsclerotia are released into the soil or remain in the plant debris and overwinter. Microslerotia have the ability to survive in most soil types and at soil temperatures typical of Michigan (around 0 °C). However, they may lose viability in soils with a high moisture level and high temperatures as the microsclerotia become degraded by parasitic fungi and bacteria.

Effective management of potato early die requires an integrated disease management strategy. The disease is controlled primarily through the use of cultural practices and soil fumigants.

An important step in control of potato early die is to reduce the amount of inoculum in the soil. Planting disease free seed, removing crop debris, using locally accepted good crop production practices to reduce crop stress, using long rotations with non-host crops (though this may be difficult due to the pathogens wide host range), and increasing the soil organic matter can limit early die development. The microsclerotia of V. dahliae can remain viable in the soil for at least a decade so longer crop rotations between potato plantings are needed to help reduce the amount of inoculum in the soil. Successive years of non-host green manures have been shown to decrease disease severity. Plants in the family Brassicaceae have also been shown to decrease soil populations of V. dahliae (Steffek, Spornberger, & Altenburger, 2006) when used in a crop rotation as a biofumigant. High organic matter indirectly suppresses V. dahliae by either releasing toxic compounds into the soil or by increasing the microbial activity in the soil.

No commercial potato cultivars have resistance to V. dahliae. Though there are no resistant cultivars available, certain varieties such as Goldrush and Ranger Russet are tolerant to V. dahliae, meaning that they are susceptible to infection by V. dahliae but yield loss does not usually occur.

There are no fungicides registered for control of V. dahliae in potatoes. Metam sodium can be used as a soil fumigant to control the number of nematodes in the soil that interact synergistically to cause potato early die, but V. dahliae is not eliminated by soil fumigants so the populations of V. dahliae often increase when subsequent potato crops are grown in rotations. 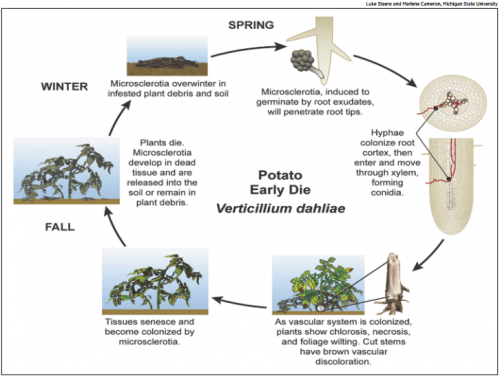 Steffek, R., Spornberger A., & Altenburger, J. (2006). Detection of microsclerotia of Verticillium dahliae in soil samples and prospects to reduce the inoculum potential of the fungus in the soil. Agriculturae Conspectus Scientificus, 71(4), 145–148.