Selecting Plant for Extensive Green Roofs in the United States

What is a Green Roof?

Green roofs, or vegetated roofs, are an alternative roofing technology in which plant material is established on the rooftop. They provide numerous ecological and economic benefits, including stormwater management, energy conservation, mitigation of the urban heat island effect, increased longevity of roofing membranes, and mitigation of noise and air pollution. Green roofs also help provide an aesthetically pleasing environment to work and live in. 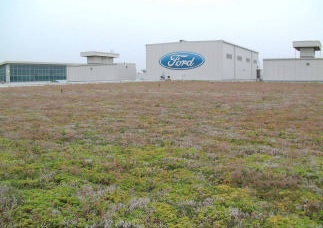 Factors in selecting plant material are design intent, aesthetic appeal, environmental conditions, media composition and depth, installation methods and maintenance. Design factors that may influence plant selection include accessibility to and use of the roof, stormwater management objectives, xeriscaping objectives and thermal insulation objectives. Before selecting species on the basis of the design intent, expectations of aesthetics should be addressed because many species have dormant periods when the green roof may not appear so green. For example, many native prairie grasses and perennials will normally dry and brown in the summer. Although this is a natural occurrence, some may find it unacceptable. 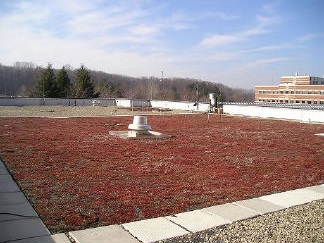 Regardless of the desired aesthetic effect, climate and microclimate have a major impact on plant selection. In particular, average high and low temperatures, extreme hot and cold temperatures, irradiance levels, wind, and the amount and distribution of rainfall throughout the year will determine what species can survive in a specific area. Drought tolerance is important because high levels of solar radiation and low media moisture are usually the norm in shallow extensive systems. Likewise, microclimates on the roof must be considered. Roof slope and orientation may influence the intensity of the sun and media moisture content, surrounding structures may shade a portion of the roof, air vents from heating and air conditioning units may dry the media, and chemical exhaust from industrial buildings may influence plant growth. Environmental conditions, especially the amount and distribution of rainfall and temperature extremes, will eliminate the use of certain species or will dictate the need for irrigation. Although aesthetic appeal is an important criterion on many roofs, survival and stress tolerance are the primary criteria.

Media composition and depth have a major impact on plant selection for green roof systems. The ideal extensive green roof medium consists of a balance of lightweight, well-drained materials, possesses adequate water- and nutrient-holding capacity, and will not break down over time. Shallow media depths found on extensive green roofs dry out fast and usually do not support woody species, deep-rooted grasses, and many annual or perennial flowering plants. Conversely, shallow media often limit the growth of many undesirable weeds, and many desirable species are naturally found growing under these shallow conditions. 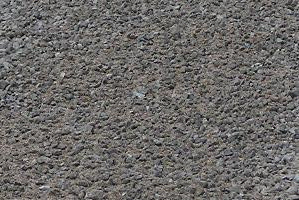 In addition, installation method may influence plant choice. Plants can be established at ground level - grown as plugs or established on a blanket, mat or tray and then placed on the roof directly - or on the green roof medium via seed, plugs or cuttings. The availability of individual species in any of these forms may influence plant selection. In addition, the method of installation chosen may influence how much irrigation is required during initial plant establishment. And the long-term need of individual species for irrigation will also be an issue in plant selection.

The variability of green roof designs and climates in the United States makes it impractical to list every possible plant candidate for extensive green roofs. As a general rule, potentially suitable species can be found by looking at the microclimate (media depth, solar levels, water availability, etc.) of the green roof in question and comparing it to a plant’s native habitat. Some species have evolved in extreme conditions, such as mountainous terrains, high altitude environments, coasts, limestone media or arid areas and are probably suitable for green roofs.

In choosing which plants to use, consider plant characteristics such as rate of establishment, longevity, ground cover density, and disease and pest resistance. The ideal species are long-lived and reseed themselves or spread vegetatively. Drought tolerance is one of the most limiting factors on extensive green roof systems because of their shallow media depths and usual reliance on natural precipitation. However, be careful to avoid drought-tolerant species that rely on deep taproots to obtain moisture – this situation cannot exist on a shallow extensive roof.

Succulent plants are well-adapted to the conditions often found on extensive green roofs because of their ability to limit transpiration and store excess water. Species such as Sedum, Delosperma, Euphorbia and Sempervivum are popular choices. Presented here are species suggestions taken from scientific literature, as well as grower recommendations. 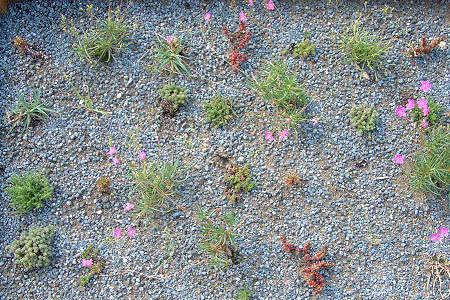 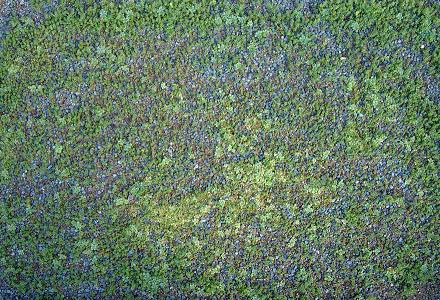 **NOTE: Any species listed here may perform differently depending on the specific micro- and macro-environmental conditions of the roof.