The pork industry has developed into multiple pork chains with particular specifications for targeted markets. These specifications can include final product attributes, scripted production practices or both. To meet these varying specifications for differing pork chains, pork producers must match their production management and marketing practices to the requirements of their targeted market. This includes developing a breeding program that utilizes breed combinations that best align with the specifications of the pork chain(s) they target. This fact sheet will compare various crossbreeding systems, performance expectations of those systems and methods of operation.

Crossbreeding is an important tool. If used correctly, it offers pork producers an opportunity to genetically improve their production efficiency and, ultimately, lower production costs. The use of crossbreeding is widespread because offspring from matings between individuals from different breeds are typically hardier, grow faster and perform better than purebreds. This improvement in performance of the crossbred individual over the average performance of its purebred parents is called heterosis or hybrid vigor. It is thought that, during breed formation, portions of the gene pairs that control a trait became homozygous (two gene copies that are the same) for undesirable genes, which cause some suppression in performance. Crossing animals from different breeds breaks up these undesirable gene combinations. Differing genes within gene pairs in the crossbred individual lead to improved performance.

Heterosis is expressed in both the growing and the adult pig. Crossbreds typically have a better survival rate throughout their lives than purebreds and typically grow faster. This improved performance in the crossbred individual is often referred to as individual heterosis. Crossbred dams are expected to have larger litters than their purebred counterparts with a higher survival rate through weaning, and wean heavier pigs. Heterosis in dams that results in improved offspring performance is often called maternal heterosis.

The expected improvement in performance from het-erosis is summarized for several traits in Table 1. For example, individual heterosis for number born alive is 1 percent. This means that litter size for purebred dams farrowing a crossbred litter should be 1 percent larger than for dams of the same breed farrowing purebred litters. For a two-breed-cross sow farrowing a litter that is a three-breed cross, the expected improvement is 8 percent. This demonstrates how strategically develop-ing crossbred sows can easily and repeatedly improve maternal performance. This is further demonstrated in Figure 1 with an example of Yorkshire and Landrace dams. The purebred average for Yorkshire is 11.1 pigs born alive. If a purebred Yorkshire farrows a crossbred litter, the expected average number born alive is 11.2. For Yorkshire-Landrace F1 females bred to a boar of a third breed, however, the expected average number born alive is 11.6, even though the Yorkshire-Landrace average is 10.9. The 0.7 increase in pigs per litter above the purebred average is due to heterosis that occurs when a crossbred litter is farrowed by a crossbred dam. 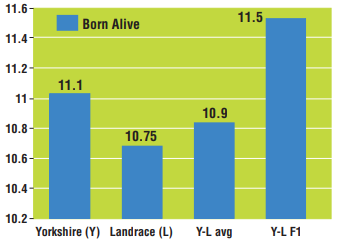 Figure 1. Comparison of F1 and purebred sow performance for the Yorkshire and Landrace breeds.

Crossing animals that have breed ancestry in common, often referred to as backcrossing, allows for reforma-tion of some of the original undesirable gene pairs. This reduces heterosis. For example, in Figure 2 are the expectations for average number born alive for Yorkshire and Landrace purebred females, for Yorkshire-Landrace F1 females and for backcross females produced by mat-ing a Yorkshire boar to Yorkshire-Landrace F1 females. The performance expectation for backcross females is lower because of declines in heterosis. 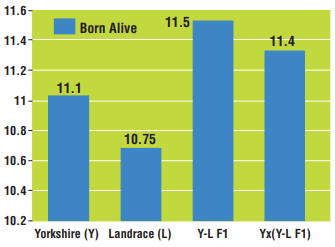 Various schemes for crossing breeds can assist produc-ers in developing a breeding program that best fits their management program and target markets. The following crossbreeding systems should be investigated for use in various pork production and marketing chains. Perfor-mance expectations using example breeds have been calculated for each breeding system for comparison purposes.

Rotational systems. Rotational systems have been popular in the pork industry. They are easy to under-stand and require the purchase of only boars or semen. Replacement females are produced internally from each of the boar breeds used in the rotation. Rotational systems do not allow for optimal exploitation of hetero-sis, however. Table 2 shows the expectation of heterosis levels through each advancing generation of a rotational crossbreeding system. In the first one to three gen-erations of the rotation, depending on the number of breeds involved, pigs do exhibit 100 percent heterosis, but as the generations advance, heterosis levels, both individual and maternal, decline to an equilibrium level. Heterosis within the two-breed rotation declines to 67 percent compared with the initial cross; the four-breed rotation stabilizes near 93 percent. A three-breed rotation is expected to maintain 86 percent of possible heterosis (Table 3).

Rotational systems may be simple in concept but can be difficult to implement correctly. Sow herds in rotation programs will be sired by every breed of boar in the rotation, but producers using rotational programs typically maintain only one breed of boar on the farm at a time. This dictates that producers will breed a percentage of the sows to a boar of the same breed as their sire. This causes a reduction in heterosis and consequently a reduction in performance and vigor.

To operate a rotational system correctly, producers must maintain on the farm boars from each breed within the rotation. Simple programs can be developed to identify the breed of boar that sired each sow so that the sow will be mated to the correct breed of boar. Using a compre-hensive artificial insemination program simplifies this. If most or all of the matings are completed by artificial insemination, it is a relatively easy process to order semen from each breed of boar needed. Correct operation of a two-breed and three-breed rotation program is illustrated in Figure 3. 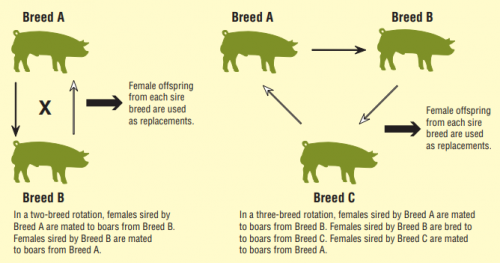 Terminal systems. Conceptually, terminal breeding programs exploit all possible heterosis within each cross and capitalize on breed strengths. Heterosis is typically maintained at 100 percent in both the pigs and the sows. Breeds are selected and used in a systematic fashion to utilize their strengths within the cross. Typically, breeds such as Yorkshire, Landrace or Chester White, which excel for sow productivity, are used to produce two-breed or three-breed specialized maternal-cross females. Boars from breeds that are noted for postwean-ing performance, carcass merit or meat quality, such as Duroc, Hampshire and Berkshire, are mated to these maternal cross females to produce market pigs. Figure 4 illustrates a terminal cross program. In this example, all females used on the farm would be purchased as well as the boars or semen used to produce the market pigs. Performance expectations (Table 3) have been calcu-lated for a terminal system that utilizes a two-breed F1 female for the sows and mates sows to a terminal breed that is superior for postweaning performance to produce market pigs. 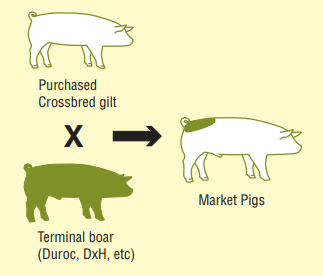 This program does have increased annual variable or out-of-pocket costs but typically yields the highest profit. In an effort to reduce regular cash expenditures, a varia-tion of this program – grandparent terminal system – is shown in Figure 5. A small percentage (10 to 20 per-cent) of the sow herd consists of purchased females used to produce replacement gilts. These internally produced gilts make up the bulk (80 to 90 percent) of the sow herd. These internally produced females are mated to terminal boars to produce market pigs. This system has lower out-of-pocket costs and just slightly lower profit-ability expectations than the terminal program. 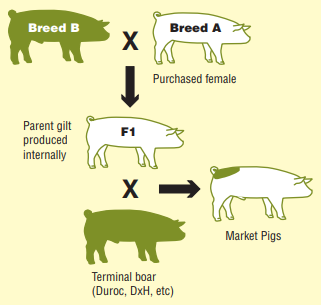 Rota-terminal systems. Rota-terminal breeding systems are somewhat of a blend of rotational and terminal systems. Rota-terminal systems use a rotation within a small portion of the herd (10 to 20 percent) to generate replacement females. Breeds used to produce replacement females should excel in maternal characteristics. For each mating group (e.g., weekly, biweekly, monthly, etc.), 10 to 20 percent of the sows are mated to mater-nal boars from a different breed than the sow’s sire to produce replacement females. At birth, gilts from these maternal matings must be identified so that, at the completion of the finishing phase, prospec-tive replacement gilts can be easily selected and removed from finishing, acclimatized and inte-grated into the breeding herd. Within a breeding group, sows not mated for replacement gilt produc-tion are bred to terminal boars or with semen from a breed that excels in postweaning performance, carcass merit and/or meat quality. This is further il-lustrated in Figure 6. 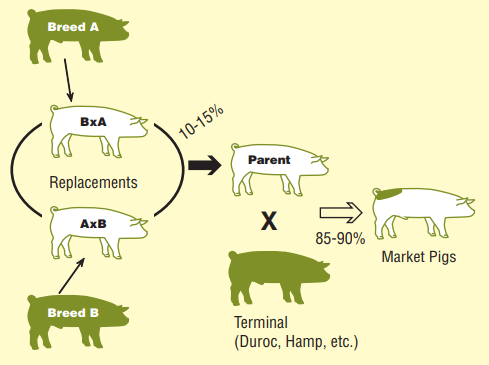 Table 4. Performance Expectations for Maternal Rotations in a Rota-terminal System.

Several important points must be considered when a producer is implementing a rota-terminal breeding scheme to produce replacement females. The first deci-sion must be how many (two or three) breeds or lines will be used in the maternal rotation. The next matter is the implementation of the breeding system. Utilizing a third maternal breed may provide an improved potential for maternal performance if farm management is ca-pable of successfully implementing this system. Manage-ment and breeding personnel must be able to correctly identify the breed of sire of gilt replacement candidates. This can be achieved by simple identification systems such as ear notching or tags. In addition, management and breeding personnel must be able to breed desig-nated females with the correct semen or boars. Breeding females with the wrong semen or boar can cause further reductions in heterosis in resulting replacement females (e.g., breed a Yorkshire-sired female to a Yorkshire boar) and reduce maternal performance potential. A three-breed maternal rotation in a rota-terminal breed-ing program can improve the potential for maternal performance. The potential improvement may be only marginal, however, and if the system is not operated cor-rectly, the actual performance could be poorer than that of a two-breed maternal rotation.

When developing a breeding system, producers must decide what type of system best fits their management capabilities, production facilities and target market. A terminal crossbreeding system in which all females are purchased from an outside source may be the best sys-tem. Whether it is depends on the genetic background of the gilts, their health status and the target market for the producer. Most producers develop replacement females within their farm systems to protect their health status, and to produce replacement gilts with a genetic combination that best fits their production facilities and the ability to produce progeny that meet the specifica-tions of their target markets.