Tuber soft rot, blackleg and aerial stem rot are important potato diseases caused by closely related species of bacteria. More specifically, these diseases are caused by the bacteria Dickeya spp. and Pectobacterium spp. (formerly classified in the genus Erwinia). Dickeya and Pectobacterium can infect many plant species, although they don’t appear to thrive on legumes or small grains. Dickeya and Pectobacterium produce enzymes that can break down the pectin of plant cell walls, resulting in tissue maceration or decay. These diseases occur sporadically in potato production areas worldwide. They can be particularly destructive when environmental conditions favor their development. Aerial stem rot and blackleg disease have increased in prevalence over the past decade in some European countries and Israel.

The diseases caused by Dickeya and Pectobacterium result in a reduction in plant emergence, plant health and overall plant stand. The bacteria also cause losses in storage, transit and marketing. All potato varieties are prone to infection, with some varieties being more susceptible. Certain varieties can be stored long-term with a reduced risk of tuber breakdown. Disease management strategies can be employed at planting, during the growing season, at harvest and in storage to reduce the risk of these pathogens. However, as with most potato diseases, an integrative approach is important to reduce crop losses.

Tuber soft rot caused by Dickeya and Pectobacterium on infected potato exhibits small, cream to tan, water-soaked surface spots that progress inward. This decay can expand rapidly, resulting in rotting tissue that is mushy, slimy and water soaked (Figure 1). Infected areas of the tuber can become puffy, creating blister-like lesions that often ooze a watery substance. Upon exposure to air, infected areas often turn brown or black around the rotting area (Figure 1). Decay can occur rapidly under moist conditions in storage due to the development of a film of water resulting in anaerobic conditions in tubers and thus predispose for soft rots. The bacteria that initiate the disease are odorless, although secondary infection by other organisms can cause an unpleasant odor. 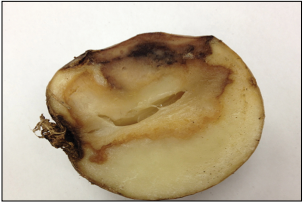 Soft rot of the potato seed piece can occur following planting and cause poor emergence or create foliar symptoms. Symptoms include weak plants with curled and drooping leaves, often resembling a wilt disease or water deficiency. Chlorotic symptoms (yellowing) may develop after the bacteria block the vascular system of the plant, eventually resulting in wilting of the potato plant. Additionally, stems and roots can become infected, leading to rot and eventually plant death.

Blackleg is caused by either Dickeya spp. or Pectobacterium spp. Blackleg symptoms appear as black lesions at the base of the stem that can quickly girdle the stem as they expand upward. Unlike tuber soft rot, infected plant stems have a black appearance (Figure 2). Affected tissue becomes soft and water soaked under humid conditions. Infected stem lesions can rapidly expand causing brown to black decay that can affect the entire stem and lead to plant death. Affected plant stems appear stunted and leaves of infected plants become chlorotic and tend to roll upward at the margin as the disease progresses. Under dry conditions, symptoms are expressed as yellow, stunted and wilted plants with shriveled infected black tissue restricted to the area around the base of the stem near the soil surface. 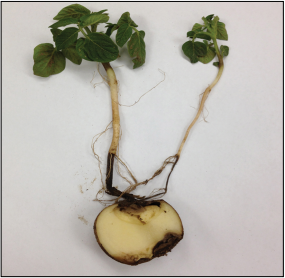 Figure 2. Blackleg symptoms progressing from the decaying seed piece to the base of the stem. (Michigan State University)

Aerial stem rot is also caused by Dickeya spp. or Pectobacterium spp. The bacteria that cause aerial stem rot primarily enter the plant through wounds (created by cultivation, windblown sand, insect injury or hail) and leaf scars. Early symptoms include irregular brown to black areas on plant stems that can rapidly enlarge into soft, decaying rot of the entire stem. Decaying stems appear slimy, mushy, water soaked and black (Figure 3). Similar to blackleg, under dry conditions, stems can desiccate, resulting in a dry, brownish to black shriveled stem (Figure 4). Other organisms can invade plant tissue quickly creating a characteristic unpleasant odor emanating from an infected field. Dense canopies, warm conditions and long periods of leaf wetness favor the development of stem rot. These conditions create a microclimate that impedes air circulation, leading to high humidity and moisture in the lower canopy. Symptoms appear mid-season when the canopy is most dense. Stem rot is most severe in fields with frequent overhead irrigation. 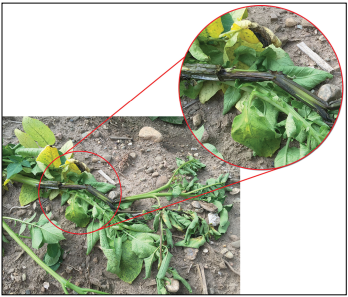 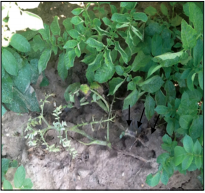 In early spring at planting, the bacteria that cause tuber soft rot, blackleg and aerial stem rot are disseminated on infected potato seed (Figure 5). The bacteria survive and tend to thrive in surface water, low-oxygen environments and on roots of weeds. Conversely, the pathogens do not survive for extended periods in the soil (generally less than 2 years). Infected seed from cull piles and volunteer potatoes can be a source of new inoculum in subsequent growing seasons. The pathogens that cause tuber soft rot, blackleg and aerial stem rot can survive for long periods in plant debris, including potato tissue, and they may spread to other seed by contaminated equipment. Bacterial infection generally occurs through wounds and natural openings in the above parts of the potato plant and tubers, and spreads from tubers to stems following rain or hail events. Saturated soil causes tuber lenticels to enlarge; these serve as infection sites for the bacteria (Figure 5). Bacteria are transferred from infected plants to healthy ones by splash dispersal from rain, irrigation and insects (Figure 5). High moisture and temperature promote disease initiation and development. A thin layer of water surrounding the potato tuber or stems creates a low-oxygen environment, thus increasing the risk for bacterial diseases in the field, in storage or both. Infection and disease development occurs when levels of bacteria are high. During storage, rotting tubers release moisture, which results in infection of previously healthy tubers (Figure 5). Infection by other pathogens can exacerbate symptoms of tuber rot. 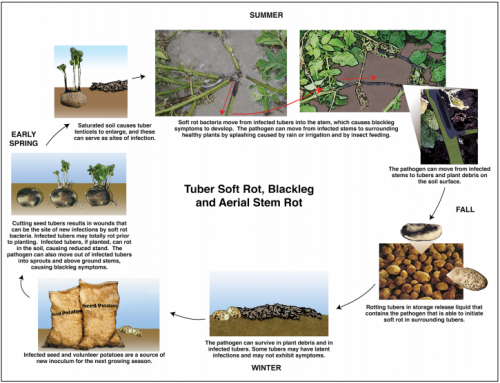 The first step in effective disease management of potato is accurate identification and diagnosis. Effective culture and DNA-based detection methods are available for Dickeya and Pectobacterium. All varieties of potato are susceptible to infection by Dickeya spp. or Pectobacterium spp. throughout the growing season. Thus, growers must manage tuber soft rot, blackleg and aerial stem rot at planting and harvest. The tuber soft rot pathogens will take advantage of vulnerabilities during harvest and storing of the potato crop. Avoid bruising and damage during planting and harvest as well as during the loading of storage bins and shipping trucks to reduce risk of disease.

Seed source is an important consideration prior to planting. Seed stock from potato certification programs carry less bacterial contamination and therefore losses from seed piece decay and blackleg are reduced. Inspect seed carefully during planting. Prior to receiving seed, clean and sanitize seed storage facilities thoroughly. Routinely disinfect seed cutting and handling equipment and make sure blades are sharp to ensure a smooth cut that heals quickly. Cutting of potato seed spreads Pectobacterium and Dickeya within a seed lot, so use whole “B size” tubers whenever possible. If cutting seed, proper wound healing (suberization) is critical to avoid new infections. Warm seed tubers to at least 50 °F before handling and cutting, and prior to planting to minimize injury, promote rapid healing and reduce condensation. After careful unloading, store seed at 40 °F to 42 °F and 85 to 90% relative humidity (RH). Keep seed well ventilated. Because Dickeya and Pectobacterium thrive in water and under low-oxygen conditions, avoid irrigating fields whenever possible until plants have emerged.

Disease Management Throughout the Growing Season

Both Dickeya and Pectobacterium can cause blackleg and aerial stem rot during the growing season. The bacterial pathogens that cause tuber soft rot also cause blackleg, where the disease kills the base of the potato stem and results in decreased plant stand. Excessive irrigation and nitrogen can stimulate excessive vine growth, which can lead to increased aerial stem rot risk. The only chemical management option during the growing season is application of copper-based treatments to try to reduce the spread of bacteria to healthy plants. However, treatment with copper does not remedy previously infected plants and has shown limited effectiveness. Dickeya can cause potatoes to wilt (Dickeya “slow wilt”) at any point in the growing season. Similar to blackleg and stem rot, application of copper materials can slow spread of disease in the field, but it is not curative. Moreover, application of copper treatments interferes with DNA-based detection.

Disease Management at Harvest and Storage

The condition of the potato tuber never improves during harvest or in storage. In the fall, harvest tubers after proper skin set and with a core temperature greater than 50 °F. Harvesting tubers at ideal temperatures decreases the risk of damage and subsequent infection by soft rot bacteria. Avoid harvesting wet fields. Promote rapid drying of wet potato tubers. Modifications to harvest equipment may help manage soft rot bacteria and other pathogens that enter through damaged tuber periderm. Tubers may show no evidence of disease going into storage and may not decay in storage due to Dickeya and Pectobacterium if stored at proper temperatures. However, bacteria on asymptomatic tubers may survive and will likely cause and spread disease the next year if these potatoes are planted. Eliminate temperature gradients within the storage pile that promote condensation and wet areas. These wet conditions promote the development of soft rot. Monitor for soft rot of tubers in storage often. Daily monitoring for high-risk areas with elevated temperature, moisture or both is essential for disease management in storage. Remove rotten tubers when loading into storage bins and during removal from storage before marketing.