Garlic mustard [Alliaria petiolata (Bieb.) Cavara and Grande] is a member of the mustard family (Brassicaceae). It is a biennial, a plant with a two-year life cycle, growing its first year as a seedling and rosette stage plant and flowering the subsequent year. It most often grows in the forest understory or along forest edges but is also able to invade undisturbed forest habitats. It tolerates low light levels and is adapted to take advantage of disturbed habitats such as trails, roadsides and areas where trees have been removed. Garlic mustard has no significant natural enemies in North America, although a diverse community of herbivores feed on it in its native range in Europe. Populations of garlic mustard can spread rapidly. In a study of high quality woodlots, i.e. typically old growth or undisturbed forest habitat in Illinois, garlic mustard advanced an average of about 20 feet per year, expanding as much as 120 feet in one year. When established, garlic mustard becomes a permanent member of the community, often dominating the ground layer habitat over extensive areas.

Garlic mustard reproduces only by seed. Most seeds germinate within the first or second year after being produced but can remain viable in the soil seed bank for up to 10 years. Seeds require prolonged exposure to cold before they can germinate. Seeds germinate in the spring and form low growing rosettes of dark purple to green, kidney-shaped leaves with scalloped edges. Leaves grow on stalks that are a half to 2 inches long called petioles. Young leaves smell distinctly of garlic or onion when crushed, although the odor becomes less intense as plants grow older. Seedling density in infested areas can reach nearly 17,000 per square yard in the fall, although overwintering mortality is high and rosette density in the spring averages 25 to 70 per square yard, but occasionally reaches as high as 375 per square yard. 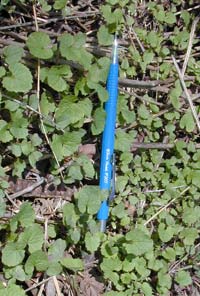 Leaves on second year plants are roughly triangular and sharply toothed, a little over one to three inches wide and long becoming gradually smaller towards the top of the stem. As with first year plants, young leaves smell distinctly of garlic or onion when crushed, although the odor becomes less intense as plants grow older. 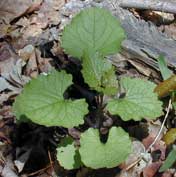 Shoot elongation from the rosette occurs in the spring, with the plant growing as rapidly as three-quarters of an inch per day. Flowers are continuously produced at the top of the long stalk. Flowering occurs in late April through June in southern Michigan. Flowers are white with four petals that form a cross. The flower is similar to others in the mustard family with six stamens: two long and four short. Petals taper sharply toward the base of the flower.

Individual plants produce from 350 to 7,900 seeds and grow to 3 to 4 feet in height. Seeds are produced inside slender pods called siliques. Each silique is approximately 1/16 of an inch wide and one to two and a half inches long and forms off the stem just below the flowers.

Siliques grow on short, rugged stalks and radiate out from the stem. Wind dispersal is limited and most seeds fall within a few yards of the plant. Dense stands can produce about 12,500 seeds per square yard each year. Humans transport seed on boots, clothing, hair, by mowing, in automobiles and trains. Birds, rodents and whitetail deer are likely seed dispersers in woodland habitats. Garlic mustard seeds can remain viable in the soil seed bank for up to 10 years. 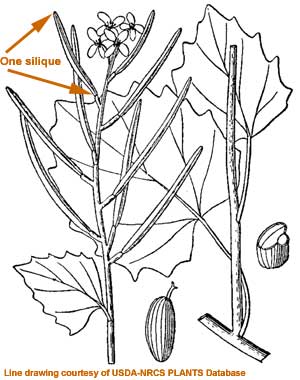 Sites invaded by garlic mustard tend to have low diversity of plants growing on the forest floor and it is widely believed that garlic mustard infestations displace native plants. Researchers in Ohio experimentally removed garlic mustard from a forest understory and documented subsequent increases in the richness and abundance of annuals and woody perennials including tree seedlings. Garlic mustard out-competes some tree seedlings, including chestnut oak (Quercus prinus), which could affect forest regeneration over time. Several compounds isolated from garlic mustard were shown to depress growth of both grasses and herbs in laboratory experiments. Researchers concluded that release of these compounds from garlic mustard root systems might account for its dominance in forest ecosystems. Others have suggested that such compounds might also disrupt mutually beneficial relationships between plant roots and certain fungi in the soil, known as mycorrhizal associations. Like many of its close relatives, garlic mustard does not establish mycorrhizal associations. These fungi are used by most North American forest ground layer plants and are critical for nutrient and water uptake in many trees. 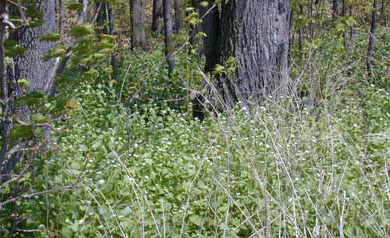 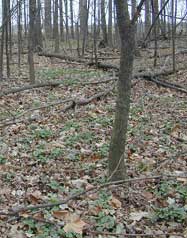 Two woodlots with garlic mustard spreading on the forest floor.

Garlic mustard appears to alter habitat quality for several species of salamanders and molluscs through changes in forest litter layer depth and composition. Insect communities are also impacted by the presence of garlic mustard. The native woodland butterfly Pieris napi oleraceae, utilizes the native toothworts Cardamine concatenata [Dentaria laciniata] and C. [Dentaria] diphylla, which produce the chemical attractant sinigrin. This compound is also present in garlic mustard. Because garlic mustard grows taller than the native hosts, in mixed stands the butterflies can mistakenly lay their eggs on garlic mustard where their larvae are unable to develop. The impacts of garlic mustard on vertebrates are largely unknown, however, ground foraging birds, amphibians and reptiles may be impacted by changes in habitat quality.

Photo credits: all photos on this webpage: Douglas A. Landis