Fruit trees will bloom later than normal in 2013 in southwest Michigan.

I am often asked when the fruit trees will bloom. My answer is usually the last week of April and the beginning of May. It is not that I have a good memory and have been around for a long time. I have 30 years of data to support my guess. My predecessor, Mike Thomas, began recording bloom dates for tree fruit in southwest Michigan in 1980. When he retired and I replaced him, I tried to keep it up as well. The dates I record approximate. It is not the dates I see the first open flower in a specific location, but the dates when most orchards have a good number of bloom in them. These dates vary due to the spring weather, but also because of what I did and where I was when I noticed bloom. Bloom in southwest Berrien County may be as much as a week ahead of where I travel and record bloom.

There is an order to the bloom in fruit trees. First to bloom are the apricots, which bloom early with the magnolias and forsythia. Then the sweet cherries and peaches bloom, followed by the plums and tart cherries. Pears often bloom with the tart cherries and finally there are the apples. The earlier a fruit blooms, the more likely it is to be damaged by spring freeze before, during or after bloom.

1Bloom of the earliest varieties

Not all the cherries and other fruits bloom at the same time. There are many varieties of sweet cherries, peaches and apples. Fruit varieties are often characterized as early, mid- or late blooming. You can expect that during a cool bloom season, there will be several days (as much as a week) between blooms of different varieties.

A lot depends on the weather, how warm is it during the day and how cold it gets at night. It is very common for us to have a warm week when the plants are growing rapidly followed by a cold week when there seems to be no growth at all. This year, we have had a cold March and April. Normally we would be in bloom by now, but all we see are swollen buds on the fruit trees. I estimate we are two weeks behind normal this year; last year we were four weeks early. The earliest bloom dates are from last year. In 2012, hot weather in mid-March got all of Michigan off to a running start. In 2013, it looks like we will be blooming close to the latest dates we have bloomed in the last 30 years.

If you use a chart to look at all the bloom dates across all the years, you can get a feeling of how the different years vary. Figure 1 shows the bloom for stone fruit from 1980 to 2012. You can see there is quite a difference between years when bloom began and the timing of bloom during the season. 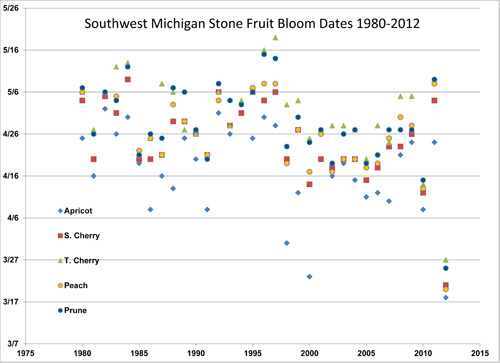 The timing of apricot bloom is a good indicator of when warm weather began in southwest Michigan. It is unusual for apricots not to be damaged by spring freezes and they are normally grown in only the best fruit sites because of the early bloom. The spread in the bloom of other fruit after apricot bloom gives a good idea of how warm or cold the season was. If the bloom dates are spaced close together, then the bloom period was generally warm. If the dates are spread apart, the season was cool or perhaps had one or more freezes.