2014 winter and road salt damage to blueberries in West Michigan

A recap of the effects winter 2014 and road salt has had on West Michigan blueberries.

Winter is part of the environment in which blueberries grow in the Great Lake region. As part of this ecosystem, blueberry bushes are accustomed to enduring freezing temperatures that, during the winter, can go as low as -20 degrees Fahrenheit. According to the National Weather Service, the winter of 2013-2014 has been one of the coldest in the last 20 years in the Great Lake region. When in the wild, blueberries are protected from the winter blast by the surrounding vegetation. However, when they are brought into the open, like in commercial monocultures, they are less able to stand adverse winter conditions.

Since Michigan’s blueberry production areas are located alongside Lake Michigan, they are exposed to wind and snow created by the “lake effect.” The proximity of blueberry fields to Lake Michigan (most fields are less than 20 miles from the lake shores) helps to ameliorate the impact of deep freeze temperatures during the winter. However, changes in the weather pattern during the winter and the increased pressure of the urban population entrenching in the blueberry growing areas of West Michigan increases the winter impact on overall blueberry health.

Since 2005, the Ottawa Road Commission implemented an Integrated Road Salt Management Program (IRSMP) to ameliorate the deleterious impact of road salt on blueberry fields facing roads receiving salt during the winter. Since the IRSMP implementation, Michigan State University Extension has been evaluating the effectiveness of this program in preventing blueberry dieback in affected fields. During these evaluations, we measure dieback in fields alongside salted roads and on fields facing non-salted roads. This evaluation has allowed us to make comparisons between winter dieback in the presence or absence of roads salt.

In 2014, we conducted our first winter evaluation in the second week of March. We sample 11 fields which included six fields that are our permanent monitoring sites for the impact of the IRSMP. Sampling included the main blueberry varieties planted in the county: Bluecrop, Elliott, Jersey and Duke. In some cases, winter damage and dieback was measured in fields with two varieties side by side. That gave us a better feeling for the winter impact on different varieties at the same location.

Figure 1. Winter and road salt damage to flower buds in Ottawa County in 2014. 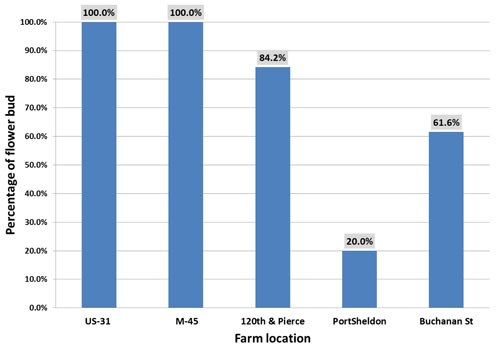 Winter damage in fields not affected by road salt can go from shoot dieback to flower buds dead or partially damaged as shown in the pictures. At those fields, flower bud damage and dieback ranged from 20 to 61 percent (Figure 2). Damage by variety indicated that in Ottawa County the least affected variety was Bluecrop followed by Duke and Jersey. However, higher flower bud mortality in Bluecrop was also related to the field location. The same variety at two fields one mile apart from each other had different amount of damage. This difference could be as much as 40 percent. 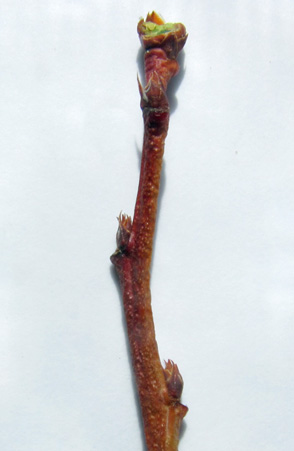 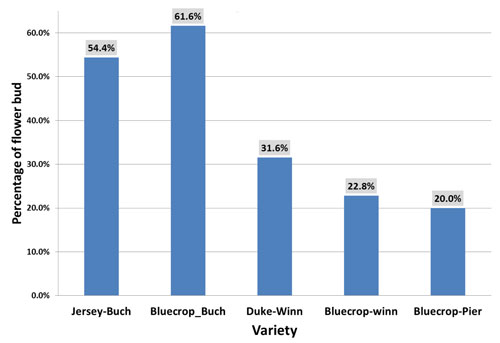 Our preliminary evaluation indicates that in areas where minimum temperatures dropped below 0 F for several days, we may expect to observe winter damage to blueberries in the range of 20 to 61 percent, depending on the variety, location and nutritional stage of the plant, except for fields affected by road salt aerosols where entire shoots are already dead or dehydrated.