A little muck or a lot of yuck?

An Oregon State University (OSU) study, recently published in Lake and Reservoir Management, suggests that “fringing wetlands may play an important role in regulating harmful cyanobacteria blooms” – the toxic blue-green algae that, in certain concentrations, reduce water quality and pose a threat to human health. Blue-green algae are technically not algae. They are cyanobacteria that, like plants and algae, utilize sunlight for the process of photosynthesis.

Many Michigan inland lakes were historically ringed with what is commonly referred to as ‘wetland fringe’ habitat – that sometimes mucky area of near shore and shoreline vegetation that is the first to go with the development of shoreline properties. These fringes of emergent floating leaf and submergent aquatic plants are known to stabilize lake-bottom sediments (less turbidity) and to reduce wave energy that erodes shorelines. They also provide important feeding, nesting and rearing areas for numerous species of fish and wildlife. For example, near shore aquatic plant communities play an important role in the life cycle of dragon flies (a.k.a. mosquito killers). A recent Michigan State University Extension article provides guidance on lake-friendly shoreline development. 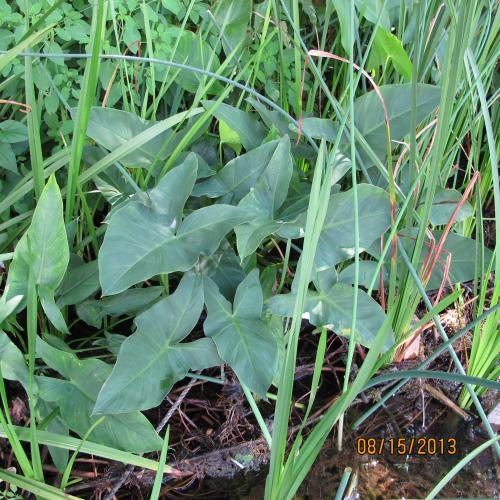 The OSU study found that the degradation of dead plant material accumulating in the wetlands of Upper Klamath Lake produced colored dissolved organic matter (CDOM) – humic substances – that, under high ultraviolet (UV) light conditions, suppress algal and cyanobacteria growth. Cyanobacteria blooms, often referred to as harmful algal blooms, are dominated by Aphanizomenon flos-aquae – a nitrogen fixing cyanobacterium in Upper Klamath Lake. Like many species of cyanobacteria, A. flos-aquae produces a liver toxin known as mycrosystin that can be harmful to humans and animals. Another MSU Extension article explained why swimmers should learn to recognize harmful algal blooms and avoid contact with, or ingestion of, lake water during a bloom.

In the Klamath watershed, increasing blooms of the toxic algae reportedly coincide with the loss of wetlands that began over 100 years ago to make way for agricultural, urban and lakeshore development. The two species of aquatic plants used in the study as a source of CDOM were bulrush (Scirpus acutus) and cattail (Typha latifolia) – both common wetland plants found along Michigan inland lakeshores.

The OSU study suggests that wetlands are a source of natural organic compounds that, under certain environmental conditions, can suppress the growth of harmful blue-green alga and that restoration of fringing wetlands and natural shorelines could aid in regulating these naturally occurring blooms on inland lakes. In short, a little near shore muck might be preferable to the “yuck” of harmful algal blooms.

For more information on harmful algal blooms please refer to Michigan Sea Grant who recommends playing it safe. “When in doubt, stay out.”

Register today!
Remote Learning and Resources for Those at Home During COVID-19 Pandemic