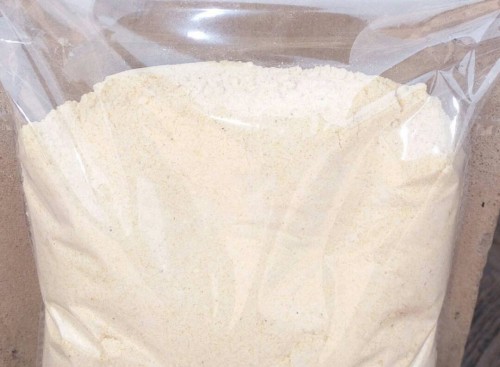 Aflatoxin is a toxin produced by mold that grows on crops including peanuts and maize. Hard to detect, it can have devastating impacts on human health, including high risk of liver cancer. Aflatoxins have been observed along the maize value chain in Nigeria: in farm storage, in maize containers during transportation, and in processed maize products. This means that aflatoxins eventually make their way into numerous locally produced and processed maize based food items. With a rapid transformation in modern diets across Africa, we observe higher purchasing of domestically processed and locally produced foods in Nigeria. Data from 2015 reveals that almost 75% of foods consumed are purchased with over 65% of these processed in some form (Liverpool-Tasie et al., 2016). A related study found that domestically processed maize products account for over 80% of the food available at wet markets where the vast majority of Nigerians shop. To ensure that these products are safe for human consumption is therefore critical.

A research team from Feed the Future Innovation Lab for Food Security Policy is studying aflatoxin presence along the maize value chain in Nigeria. They tested the levels of aflatoxins in three maize products (available in the domestic Nigerian market) in a toxicology laboratory at Michigan State University. The first product was a locally processed and packaged maize cereal (ogi) used as a weaning food and family breakfast cereal across Nigeria. The second was a locally produced custard (made with imported corn starch), and the third, a locally produced cereal product from a multinational food and beverage company. The results revealed that the mycotoxins detected in the locally produced custard and the cereal from the international beverage company were below limit of detection (i.e. less than 2ppb) while the locally produced Ogi had a high level of aflatoxin B1 of 15ppb, much higher than the 2ppb recommended by the Standard Organisation of Nigeria (SON). The high level of aflatoxin B1 in the locally produced Ogi could result from high levels of contamination of the maize grain and/or inefficient processing in terms of the fermentation process. This confirms that much more attention needs to be paid to issues of food safety generally and including among processed and packaged foods in Nigeria.

Domestically produced processed foods are important to the Nigerian national economy as they constitute foreign exchange savings. They also create numerous opportunities for domestic entrepreneurs and farmers, with great agrifood industrialization and commercialization potential. Thus such economic trends are desirable and should be encouraged, the results from this study raise major concerns related to food safety for the Nigerian consumers. This study also shows a need for more research to understand how to handle the levels and growth of aflatoxins along the maize value chain and in maize processed foods. The introduction and enforcement of regulations are urgent to meet food safety and nutrition standards in Nigeria, and should be planned along with the development of domestic food processing.

Transforming Agriculture to Improve Food and Nutrition Security in Nigeria

Changing the Fertilizer Conversation in Nigeria: The Need for Site Specific Soil-Crop Fertilizer Use

Income Generation From Stinging Bees Without A Sting