How food date labels cause confusion and food waste.

Open your fridge, pantry, snack drawer – anywhere you store food. Look for the words “sell by,” “use by,” “born on” or “best before.” I guarantee some iteration of those words is on your packages, every one of them – from canned goods to eggs, from corn chips to soda. Have you ever considered what those dates actually mean? Have you ever thrown food away based on those dates?

It turns out those dates often don’t reflect anything about the safety of the food, and are simply manufacturer’s 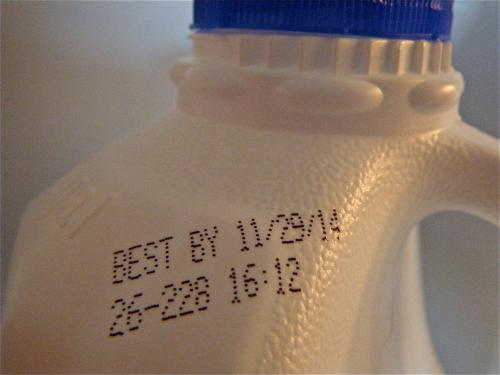 recommendation for when the food is at its peak freshness. None of these types of labels are federally regulated, except on infant formula, which is due to nutrient degradation, not spoilage. Most states, including Michigan, have no legal definitions for what “best by” and similar terms mean. The only requirement issued by the Michigan Department of Agriculture is that “all packaged, perishable foods (those with a shelf life of less than 90 days) must be labeled with a recommended last day of sale consisting of the month and day.” You’re probably wondering, what does “recommended last day of sale” really mean? It’s hard to say for sure. It could be the last day in which the company’s research shows ideal color, texture, etc. It could be based on consumer reports on taste and general “freshness.” One thing is for sure though, these dates do not ensure or indicate the safety of food, and throwing food away based on these dates is costing Americans millions.

Studies have shown that Americans waste between 40-50 percent of food produced domestically. This happens at all stages from farm to table – sometimes crops are planted but never harvested; food is discarded at manufacturing and packing facilities because it doesn’t meet standard cosmetic requirements (like multi-pronged carrots, or oddly-shaped potatoes); food wasted when restaurants prepare more than needed; products thrown out at grocery stores because they can’t sell anything beyond its label date; and the same thing in your own home – food thrown out based on confusing labels. Household food waste due to misleading labels accounts for 20 percent of the food waste stream, costing us $300-$500 a year per household, and nationwide, would fill the Rose Bowl stadium every day. According to the Environmental Protection Agency (EPA), food waste in America, as a whole, accounts for 25 percent of our fresh water usage. That same data shows that if we didn’t waste the amount of food we currently do, we would have enough land to produce food for the number of hungry people worldwide, twice. Our food waste is devastating to our economy and our environment.

A 2013 study done by Harvard University and the Natural Resources Defense Council found that more than half of adults in America throw away food based on these dates because they think the food will make them sick. Furthermore, most grocery store personnel surveyed also had no real concept of what the dates meant, even though they were discarding tons of food every year based on the date alone. While individual states and the U.S. may not come to a consensus anytime soon, you as the consumer can play a role in reducing food waste. Michigan State University Extension recommends the following to reduce your home food waste, while still emphasizing food safety: