Are you willing to run 50 minutes to burn off a soda or fruit juice?

The link between the consumption of sugar sweetened beverages (SSBs) and poor health is clear. Research has illustrated that regular consumption of beverages such as soda, fruit and sports drinks and sweetened teas are associated with poor dietary quality, increased rates of obesity, Type 2 diabetes, and tooth decay. Sugar-sweetened beverages are the largest contributor of added sugar and calories in diets among youth – with the highest consumer of SSBs being teens.

According to the Robert Wood Johnson Foundation Healthy Eating Research, American children and teen consumption of SSBs has steadily increased over the last 30 years. The figure below illustrates that between 1977 and 2001, the number of daily calories consumed by youth from SSBs and fruit juice increased, while the number from milk declined. 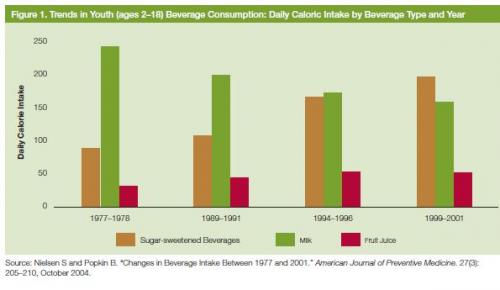 Negative health consequences associated with SSB intake are of special concern for African-American and Mexican-American youth whose consumption has been rising faster in comparison to white peers.

What can be done to curb sugary beverage intake among teens, especially among minority youth? Sara Bleich and colleagues from Johns Hopkins School of Public Health designed a study to see if how the calorie information is communicated makes a difference in purchasing behavior among black teens in low-income, urban neighborhoods. Signs were installed in six corner stores and included the following:

The primary results of the study published in October in the American Journal of Public Health are noted in the infographic below. 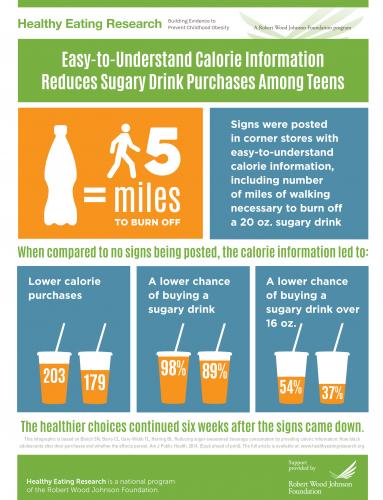 Study findings illustrate how using low-cost, easy to understand signage may be effective in preventing obesity and chronic diseases among a high-risk demographic.

Health information on the internet

Enjoy your food, but eat less