Asian Carp – new science aids understanding, but how much science is enough? (Part 1)

There is no debating that silver and bighead carp pose a risk to certain Great Lakes habitats. Research has helped to illuminate the threat and investigate control measures, but fisheries professionals have stated clearly that the time for action is now.

In July of 2010, a bighead carp was caught in Lake Calumet, six miles from Lake Michigan and upstream of electric barriers designed to prevent fish passage through the Chicago Area Waterways (CAWS). It was captured as part of a rapid response effort that followed widespread findings of bighead and silver carp DNA in canals upstream of the barriers.

In an effort to clarify the facts, a group of top fisheries scientists, including Dr. William Taylor of Michigan State University, authored a paper published in the Journal of Great Lakes Research. The paper addressed four main assertions that were made to downplay the need for ecological separation. The authors were clear in their message—that science was already sufficient to demonstrate a need for re-separation of the two basins. 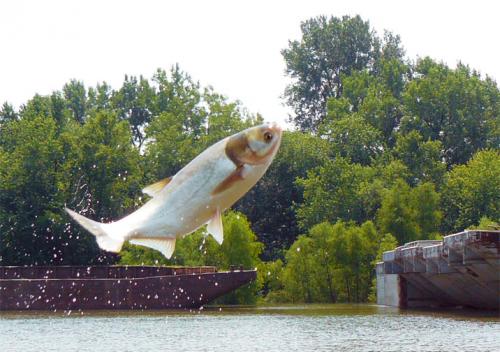 The American Fisheries Society also passed a resolution supporting ecological separation in 2011. The resolution indicates widespread support for separation among fisheries scientists, managers, and other professionals. Again, the message was clear. The weight of evidence is already sufficient to convince the majority of fisheries scientists that something must be done.

Since 2011, several studies have furthered our understanding of risks posed by Asian carps and potential for their control. What have we learned in the past two years, and has it changed the balance of evidence related to key questions?

Can we eat them to beat them?

While it made for some catchy headlines, the short answer to this question is no. It does make good sense to utilize an abundant resource, but unfortunately it is will be hard to make a serious dent in their populations where they are most abundant. A 2012 study, based on populations in the Illinois River, suggests that control is impossible unless large and small fish of both species (bighead and silver) are heavily fished.

Current markets for Asian carp, including export to China, focus primarily on large bighead carp that command a price high enough to justify the expense and labor required to catch, process, and transport the fish. Silver carp are less desirable, and small specimens (<20 inches long) of both species are not fished commercially.

While demand for fish meal, fish oil, or fertilizer products could theoretically stimulate more fishing pressure on small Asian carp, the economics may not be viable. One fish oil and fishmeal processor based in Havana, Illinois has already gone under trying to make it work. The Heartland Processing plant closed after four months because the market price of meal and oil was not enough to offset the cost of harvesting and processing Asian carp without substantial subsidies.

Even if alternate markets are developed, fishing gear for small carp will be different than gear used for large carp. If small-mesh gill nets are used, they will likely result in much higher by catch of native fish. In short, any expansion of fishing efforts for small carp will face economic, ecological, and social challenges that have yet to be fully explored.

Don’t move a mussel, or a water milfoil or any other aquatic invasive species!