Asian longhorned beetle: Not a Michigan resident yet

Knowledge is our best weapon when it comes to monitoring Asian longhorned beetles.

Asian longhorned beetles are called the starry sky beetle in its native lands of China, Japan and Korea. The adult beetle can measure from approximately 0.75 to 1.5 inches in length. This is an eye-catching insect with a shiny black body and approximately 20 scattered white spots on the wing covers. The antennae are longer than the body and are black and white banded. Males could have antennae measuring up to 4 inches in length. Those long antennae give it part of its name, “longhorned.” The black legs have a frosty, pale blue color superimposed on the upper portions. Be careful though as this insect closely resembles the pine sawyer beetle. 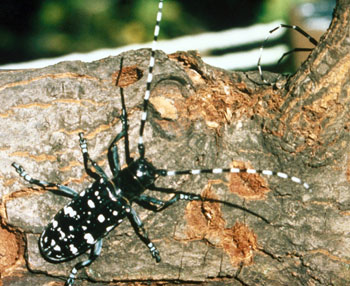 This beetle can be found in maple trees with Norway maple being a favorite choice. Other host trees are poplar, elm, willow, ash, pear, plum, black locust and mulberry. This beetle attacks healthy trees. The fertilized female chews ragged, irregular depressions in the bark called and oviposition sites. Large amounts of coarse sawdust are found below these holes. The tree can leak copious amounts of sap. When the tiny larvae hatch, they chew their way into the tree and begin working just below the bark in the cambium layer. As they grow larger, they work their way deeper into the heartwood of the tree.

The larvae of Asian longhorned beetles can remain inside the tree from one to three years. As they feed they produce an oval tunnel and rough, sawdust-like frass is pushed out of the tree. Most spend one year inside the tree, then they pupate and change into an adult. They leave a round exit hole in the trunk of the tree three-eighths of an inch across. Because most of their life is spent inside trees, pesticide control is difficult.

Asian longhorned beetles were first found in the United States in Brooklyn, N.Y., in 1996. This beetle associated with solid wood packing material called dunnage. The larvae were transported with crates or pallets from their native locations. Dying or damaged trees in New York were cut to be destroyed and hauled to Amityville and Islip, Long Island, and those areas also developed problems because the wood was not destroyed rapidly enough.

In 1998, Asian longhorned beetles and tree deaths were discovered in Chicago very close to O’Hare Airport. With excellent inspections and management by the USDA’s Animal and Plant Health Inspection Service, the beetles in New York and Chicago have been eradicated.

Be observant and vigilant. Inspect your trees, especially during the summer when damage is most apparent. Adult beetles can be found between May and October with July being the most likely month. This insect has been found more in cities and towns than in the countryside or forests. Be aware of what to look for regarding tree damage and call your local MSU Extension educator if you have concerns on what you have found.