B Corporations: A 21st century option for the ethical driven business

B Corporations put environmental and societal impact at the same level as bottom lines and shareholders.

While shareholders and bottom lines are important to business owners, often just as important are the environment and people the business impacts. Ethical or responsible industry is progressing towards being the norm in the world of business. Before joining Michigan State University Extension, I worked in Thailand for a social enterprise that was based out of New York City and funded both social and environmental projects in various countries via profits made elsewhere. A few of our funded projects dealt directly with reforestation in ethnic regions and qualified health trainings for a non-profit woman’s shelter. This model sounds very similar to something along the lines of corporate social responsibility (CSR), where corporations will, for a number of reasons, fund conservation efforts in developing countries. However, one growing area of business that is gaining momentum are Benefit Corporations, better known as “B Corporations.”

Some may ask, why certify your corporation as a “B”? Given the growing trend in consumer behavior and desires, B Corps are acting on their own behalf and in accordance with consumer trends and expectations.

In 2013, some consumers of industrialized countries want to know and support businesses which are doing more than selling goods for profit, but acting for the betterment of the environment and community they produce their products in and to the people they sell to there or elsewhere. Overall, the driving cause behind this movement is to further sustainability goals that take ecology and community much into consideration at a level of importance near stakeholders and profits.

According to Kooperman/Gillespie, a boutique law firm based out of Ohio, to be certified as a B Corporation, your company must agree to take on additional corporate responsibilities.

Some cities, such as Philadelphia, offer tax incentives for corporations to go through the certification process of becoming a B Corp. Michigan, along with a handful of other states, have introduced or have legislation in the process. Legislative examples dating as far back as 2011 can be viewed here if interested: Senate Bill 359, Senate Bill 360, House Bill 4615, and House Bill 4616. As of 2014, a number of businesses in West Michigan have become certified B corporations, and they range from construction to engineering to a craft brewery in Grand Rapids. As of 2014, Corp magazine reported 27 states adopted Benefit Corp Laws. A map outlining states with adopted laws has been provided. 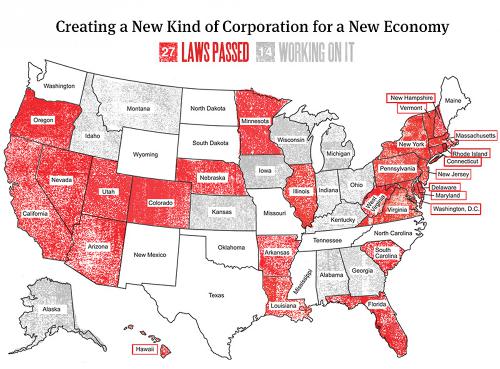 Map of states that have passed or are considering Benefit Corp laws, courtesy of Corp! Magazine. https://www.corpmagazine.com/sales-and-marketing/27-states-adopt-benefit-corp-laws-michigan-still-in-limbo/

B Corps appoint a benefit director who makes choices to further align missions with not only stakeholders/investor interest, but those of the community and environment as well. Naturally, if these issues are important to you as a consumer or professional, you may gravitate toward companies that are conducting themselves in a manner in line with your values. In 2008, there were 125 certified B Corporations across North America. As of 2013, nearly 700 existed throughout nearly 30 countries representing over 60 industries. Some examples of B Corporations are Patagonia, Ben & Jerry’s, and Seventh Generation.

Setting a budget is not just a business thing—Part 1