The black stem borer is a very small – about 2 millimeters – ambrosia beetle (Xylosandrus germanus) that attacks stressed fruit and nursery trees. It prefers young trees with trunk diameters of less than 2.5 inches. The insect is rarely seen outside of its galleries and only females emerge from the galleries they create to infest new trees.

The most common sign of infestation includes a round entrance hole that is approximately 1 millimeter in diameter. This hole can have a toothpick-like string of compacted boring dust and frass emerging, and sometimes weeping or oozing of plant sap from it. In significant infestations, multiple holes can be found in a single tree trunk. Holes may appear similar to those made by other small boring insects, such as a bark beetle called the shothole borer (Scolytus rugulosus).

Black stem borers were first detected in the United States around 1930. By 1980 they were detected in Michigan but were mainly considered to be a pest of nursery trees because they were rarely seen in commercial orchards. However, since 2010 they have been found infesting trees in young apricot, plum and high density apple orchards in all the main tree fruit growing areas in Michigan and across the Great Lakes region including New York, Ohio, Indiana and Wisconsin.

The black stem borer will infest a wide variety of woody plant species. They can be found in all tree fruit species that are grown commercially in Michigan but also infest many common forest tree species found near orchards such as oaks, elms, black cherry, pawpaw, beech, dogwood and black walnut. Ambrosia beetles as a group are attracted to ethanol, which is naturally produced by injured trees. After a harsh winter, some trees that are in fact injured, but look uninjured, will produce ethanol, which attracts the beetle. Ambrosia beetles do not usually attack healthy, unstressed, older trees because healthy trees produce resin to kill potential trunk invaders; however, young saplings produce less resin than mature trees and are vulnerable to attack.

Females emerge in spring to find new hosts, boring a tunnel and one or more brood chambers in the sapwood or sometimes the heartwood of a tree. The brood chambers are where eggs are laid and larvae develop. Ambrosia beetles carry fungal spores on their bodies that they use to cultivate fungal “gardens” on the walls of the tunnels and chambers. Larvae and adults feed on the fungus growing on the gallery walls. Each gallery can contain up to 100 larvae. Temperate climates like that in Michigan can see up to two generations per year. Females may overwinter in galleries or in leaf litter near the base of trees. 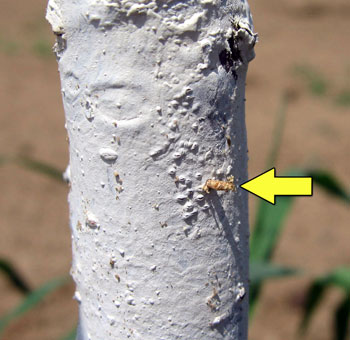 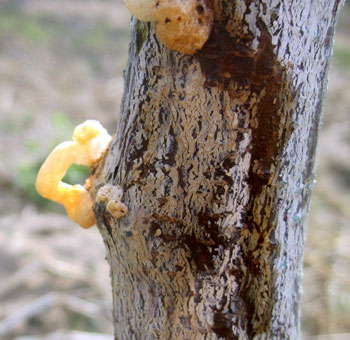 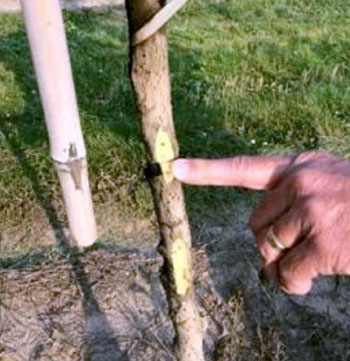 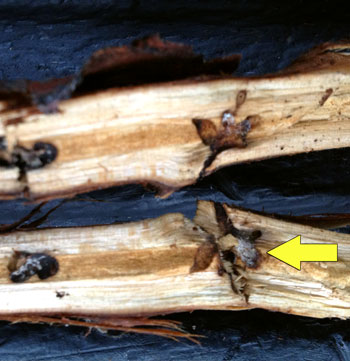 Left, Holes made by a black stem borer in apple with bark cut away to show damage. Right, A young apricot sapling split open to reveal damage caused by a black stem borer and signs of the fungus it was cultivating in its galleries. Arrow points to fungus. Photo credits: Amy Irish-Brown (left) and Bill Shane (right), MSU Extension

The black stem borer is an occasional pest that can mainly be found along orchard edges near adjacent wood lots. They are attracted to stressed trees. Stress conditions where this pest has been found have included drought, flooding, high density planting, winter damage, and top-worked trees. When scouting for this pest, focus on young orchards, low area, and trees in sandy soils.

To monitor for the pest, look for the signs of infestation described above within 1 meter (3 feet) of the ground. Trapping is also recommended to identify the beginning of flight in the spring. This can be done by creating a simple trap out of things around the farm/home to capture females. Cut two to four windows in the body of a plastic 1 or 2 liter bottle that has a cap. Hang it in the orchard upside down at a height of 0.5-1 meter (1.5-3 feet), near wooded areas or in low areas where trees are prone to cold injury and where there are trees with signs of infestation.

Bait the trap with ethanol using one of the following three methods:

If using hand sanitizer, traps must be checked daily because the sanitizer will form a crust on the surface after 24 hours. If using vodka or a purchased lure, traps should be checked at least once per week. Beetles are very tiny and require the use of a microscope and training to identify them correctly to species. Your local Michigan State University Extension fruit educator can help.

Unlike other borers, trunk sprays of systemic insecticides will have very little to no effect on black stem borer. This is because the insect does not feed on the tree itself. Instead it feeds on the fungus that it cultivates in its well protected galleries. The only potential time that an insecticide spray might have an impact is when females are emerging in the spring. Recent work at MSU has shown that one to two trunk sprays of a long lasting pyrethroid with the first spray timed at the beginning of flight in the spring has a significant effect on infestation rates of fruit trees. Repellent products currently in development have shown some promise as well.

Recent research suggests that the first flight of females in the spring typically occurs after the first two days with high temperatures above 68 degrees Fahrenheit (20 degrees Celsius). This usually corresponded with the accumulation of 75 growing degree days (GDD) base 50 F from Jan. 1. This usually occurs just before or during bloom in stone fruits and between 0.5-inch green and pink in apples. Monitoring using ethanol traps like those described above are still the best tool for identifying the start of the flight and, therefore, timing of the first insecticide spray for black stem borer.

Later in the season, the best management strategy is to remove trees with extensive symptoms of decline (75% or more of the tree dead or dying) and burn them. It is also important to make sure all large prunings and brush piles are either flailed or burned. This is because both stressed trees and fresh cut, large diameter prunings have been implicated as sources of new infestation. Trees that still seem healthy with a few borer holes in them might survive and should be treated for the pest using the scouting techniques outlined above to time the application of an insecticide.

If you suspect you have this beetle infesting young orchard blocks, please contact your local MSU Extension educator.