Harvesting this hard-to-crack nut is worth the time and effort.

Fall brings hard work and rich rewards around harvesting all the wonderful fruits, nuts and vegetables grown throughout the season. Enjoying the earthy flavor of Michigan’s native black walnut (Juglans nigra) is no exception. Black walnuts have a distinctively different flavor from the English walnut (Juglans regia) meats found in grocery stores. The native black walnut can be used in exactly the same culinary ways as the English walnut, but with superior results. 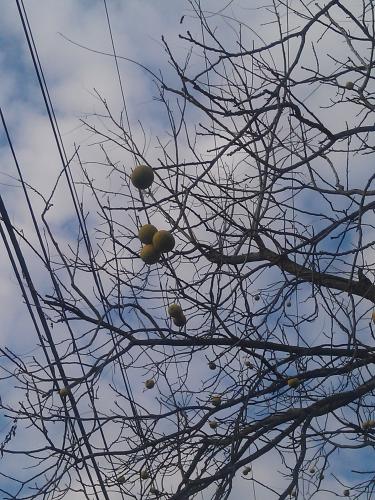 Photo: There is no need to try and pick black walnuts from the tree's branches. They are ripe only after they have fallen on their own. Photo by G. Peterson.

The biggest challenge in harvesting the nuts is getting to them before the squirrels do. When the nuts have fully ripened, they will fall to the ground with the lightest breeze. The husk will be yellowish-green and often with black or brown mottling. Pressing a thumb into the husk should result in an indentation. If there is a lot of resistance, let it sit for a week or so to soften. 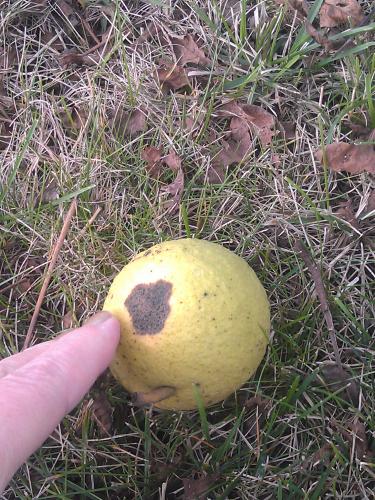 Remove the husk simply by rolling it on a hard surface with a heavy foot. Rolling over them with a car can also remove the husks, but also risk the chance of crushing the nut itself if the road surface is too hard. Regardless, be sure to wear old shoes and gloves to pick out the nuts—the husk juice will stain anything it touches.

Rinse the nuts in a large bucket of water or with a garden hose to remove most of any hull material that remains, then allow to dry. The nuts should then be cured in a mesh bag, onion sack or any other sack that allows air flow (to retard mold development). After 4-5 weeks, they’re ready to be cracked open. The hard shells will require a solid tap of a hammer on the bottom of the nut or a gentle squeeze in a vise. The nut meat can then be picked out. The oils in the nut meats will go rancid easily, so keep in the freezer for long-term storage.

Black walnuts are an important component of open forests in southern Michigan, often found along fencerows or edges of woodlands. Besides the obvious value to certain wildlife species, the wood’s rich, dark color and durability also make it a favorite for furniture, cabinetry, paneling and veneer.

Photo: Nuts are ready to be collected when the husks are yellow-green. Photo by G. Peterson.

While out admiring this valuable, versatile and tasty species, however, be on the lookout for the latest disease threat: Thousand Cankers Disease (TCD). This disease was first discovered infecting black walnut trees in 2010 in Tennessee, and it is slowly spreading to other states within the black walnut’s natural range. The tiny walnut twig beetle is responsible for transmitting the fungus from one tree to another when it travels to new hosts to feed and lay eggs. Each fungal introduction leads to cankers on the twigs and branches, eventually spreading and girdling the tree, causing it to die. The disease has officially been spotted in Ohio, so it is especially important to remain vigilant here in Michigan. Although it may be hard to spot any signs of it now that most walnut trees have shed their leaves for winter, this is a good time to read up on the disease before next year’s growing season. Be sure to review USDA National Institute of Food and Agriculture’s Thousand Cankers Disease website for details on what to look for, and go to the Michigan State University Extension news article on the disease for quarantine information. The best way to avoid unintentionally spreading the disease is to purchase and burn local firewood only.