Boaters and anglers can help slow the spread of invasive species

By following the Inspect, Remove, Drain, Dispose, and Spray, Rinse, or Dry protocol, boaters and anglers can help protect their favorite lakes and streams from invasive species.

Nearly everyone who spends time on Michigan’s lakes and streams has experienced some of the impacts invasive species have had on our aquatic habitats. Zebra mussels cover the 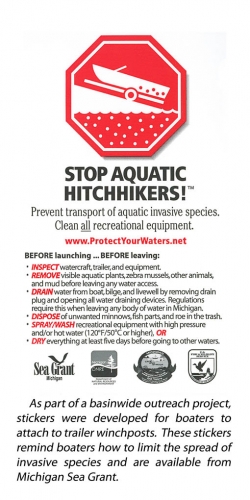 bottom of many shallow, rocky lakes and streams. Their filter feeding clears the water, leading to nuisance algae blooms and excess growth of aquatic plants. The invasive Eurasian watermilfoil is one such plant. It grows to the surface and forms dense mats that make power boating difficult and crowds out native plants. In addition to these well-known pests, hosts of other invaders are spreading through Michigan waters.