Build a better windscreen for your evergreens this winter

Just say “no” to winter injury of your evergreens by giving them some protection.

Michigan winters are often capricious. Gardeners are never sure what the conditions will be. But many a gardener has found that winter created more problems for certain woody ornamentals than the growing season did. It often is not the bitter cold, but warm, dry winds blowing over needles or leaves.

Anyone growing short-needled evergreens might find that the needles are badly yellowed or have turned brown in the spring. Some of those shorties might be Black Hills, Serbian or dwarf Alberta spruce. This can also happen to some broad-leafed evergreens like boxwood, azalea and rhododendron. If these evergreens are planted in areas where they get a great deal of wind, needles or leaves can be dried to the point that they discolor and drop off. Michigan State University Extension horticulture educators have recommended windscreens for many years to prevent damage, but often times gardeners want to fix damage instead of prevent it.

There is a simple cure that can protect your specimen plants. In late fall, make sure plants are mulched with 3 inches of organic material and have been watered. Wind burn doesn’t have to happen if a gardener has constructed a wind screen around the plant. Build a secure windscreen so that it cannot be torn loose in high winds and give the evergreen a terrific beating. 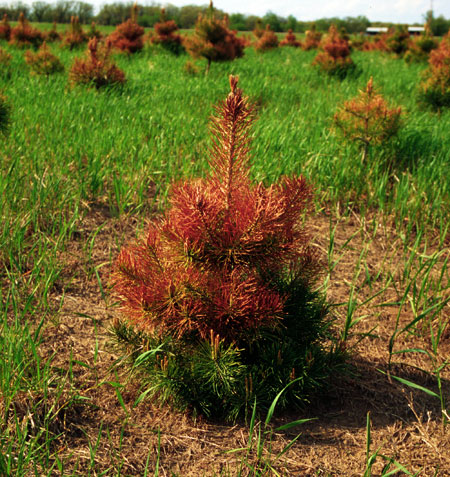 Instead of just a cylinder of burlap, add another layer. Put stakes in the ground far enough way from the plant that they do not touch. The best choice of stakes is the slender posts used for temporary electric fencing for livestock. Near the bottom of the post there is a triangular piece of metal that acts as a stabilizer when the post is in the ground. It keeps the post from leaning. At least four posts per plant are needed. Surround the posts with a cylinder of wire-like chicken wire, hardware screening, welded or woven wire farm fencing. Overlap slightly and wire the ends together. Then add the layer of burlap. It should also overlap. Secure the burlap to the fence with wire bag ties or wire twist ties. Place them high, low and in between. Make sure the top is open and the bottom burlap is snuggled into the mulch for more stability.

If this is a really troublesome site, consider adding another layer of fencing on top of the burlap. You have essentially created a windscreen sandwich, with the burlap being the peanut butter.

Stakes can be put in the ground in October and the screening added in November or December. It’s always wise to choose a calm day when it is not very cold. It’s very difficult to use twist ties wearing mittens. The windscreen can remain in place until early to mid-March. Posts can remain until the ground thaws.

This windscreen also helps prevent critter damage, especially if the wire is hardware screening. When this wire is pushed into the ground, munchers like voles and rabbits can’t break in. If deer are a problem, crisscross wire or heavy string over the top of the cylinder so deer can’t lean in and bite off tops.