With honey bee declines recorded around the world, how do bumble bees compare on outdoor vine crops?

Bumble bees in cucumbers and watermelons

In North Carolina, researchers limited pollination of cucumber (Cucumis sativus) and watermelon (Citrullus lanatus) flowers (‘Calypso’) to zero, one, six, 12 and 18 visits per flower from honey bees and bumble bees, respectively, and compared that to flowers left open to unhindered visits. They found that increased visits from both bees resulted in fewer abortions and higher seed set, but bumble bees consistently out-performed honey bees (Table 1). Follow-up studies further discovered that when provided two bumble bee colonies and two honey bee colonies, more bumble bees were observed in the crop, and they visited twice as many flowers per minute as honey bees (Figure 1). 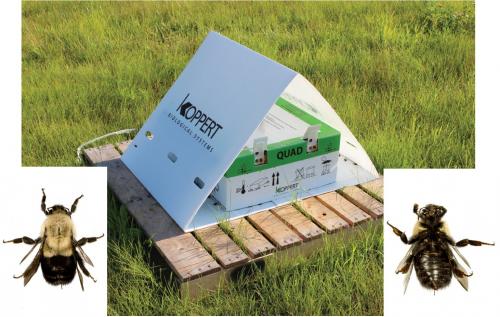 In another study, researchers investigated if bumble bees placed in pickling cucumbers and watermelon were affected by temperature conditions by constructing shade structures for them in 2011 and 2012 in Delaware (Figure 2). The results showed that shade structures had a positive effect on colony foraging activity and weight in both years for bees in watermelon, and one year for bees in cucumbers. Otherwise they spent more time thermo-regulating the hive than foraging. 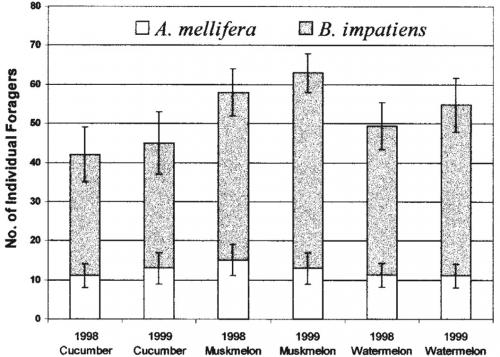 Figure 2. The bar chart above shows the numbers of foraging honey bees and bumble bees observed in cucumber, muskmelon and watermelon when two hives of each species were stocked nearby.

In 2012, shaded and unshaded bumble bee hives in cucumbers did not appear to forage on the cucumber flowers, quickly lost weight, and suffered from blowing away in the wind and honey bee raids. There was not an appreciable or practical effect on yields of either crop, though there were more 3b cucumbers only in 2011 within a 20-foot vicinity of the hives placed in the middle of fields.

Bumble bees in muskmelon and cantaloupes

In Ohio, naturally-occurring honey bees and bumble bees in muskmelons (Cucumis melo) were not different in their pollen deposition to female flowers, but bumble bees removed more pollen from male flowers than honey bees and spent more time in flowers. Therefore, bumble bees would be more efficient pollinators of these crops if their visitation frequency were higher than honey bees. In North Carolina, this was observed when two colonies of each species were placed near experimental muskmelon fields.

When comparing the performance of honey bees and bumble bees visiting pumpkin flowers, researchers in New York found that honey bees spent two to three times longer in flowers and visited flowers 10 to 20 times more frequently. They also limited pollination of pumpkin flowers (‘Mystic Plus’) to zero, one, two, four and eight visits per flower from honey bees and bumble bees, respectively, and compared that to flowers left open to unhindered visits. They found that bumble bees deposited three times more pollen grains on an individual visit, which improved fruit set, fruit weight and seed set.

Bumble bees outperformed honey bees in this controlled experiment. However, in a follow up study in New York, researchers were unable to detect any fruit weight, seed set or yield differences when comparing pumpkin fields supplemented with only honey bees (0.5 hives per acre), only bumble bees (two quads per acre) and unsupplemented fields.