Calico scale is catching peoples’ attention in southern Michigan. A few years ago we began receiving a few phone calls about an attractively striped scale insect causing problems on Stonefruits (Prunus spp.), maple and elm, but it can also be found on zelkova, pear, dogwood and crabapple. Mary Wilson (Master Gardener Coordinator and Consumer Horticulture AOE co-chair) reported a flood of phone calls coming in this week to the Oakland County MSU Extension office about calico scale.

Like the other soft scale insects listed above, Calico scale has one generation per year, with the crawlers emerging in June or early July. The rapidly growing female scales produce copious amounts of honeydew in May and June before eggs are produced. Honeydew is the sugary liquid waste produced by scales as they siphon and digest large volumes of tree sap in order to obtain the amount of protein they need to grow. The honeydew rains down on leaves, and anything standing, sitting or parked under the tree. In a few days a black fungus, called sooty mold, begins to grow on the honeydew, sometimes turning the upper surface of leaves black. When the eggs hatch in June, tiny oval-shaped and flattened crawlers will emerge and crawl to the leaves to settle and begin feeding. They feed all summer, growing to a length of 2-3 mm by the end of the summer. In the fall, the young scales move from the leaves to twigs and branches where they spend the winter. In May, the scales grow rapidly to a length of 5-7 mm.

Cottony maple scale (on silver maples and honeylocust) and severval Lecanium scale spp. (on oak, hickory, ash, birch, beech, honeylocust, yews, arborvitae, Prunus spp. and many others) have a similar life cycle to the calico scale. Honeydew is produced in abundance in May and June and crawlers emerge in June and early July. Outbreaks of all of these scale insects are associated with a lack of natural enemies that usually keep them under control. Small black ladybird beetles (twice-stabbed) and small parasitic wasps are among the most important natural enemies. Populations of scale insects in forest and woodlots tend to rise and fall in cycles of four to 10 years, depending mostly on natural enemies. However, some outbreaks have been observed to be much more severe in mosquito spray zones, nurseries, or other places where repeated insecticide applications may suppress natural enemies.

Individual trees can be treated with a basal-applied soil systemic insecticide, by trunk injection, or by a foliar spray applied during crawler emergence. Homeowners have two options for treating small trees (less than a 15-inch diameter trunk) themselves: Bayer Tree and Shrub Insect Control applied around the base of the tree in early May of each year, or ACECAP implants, which are tapped into the trunk after drilling holes according to the instructions, also in early May of each year. Larger trees should be treated by a tree care professional. They can apply Merit or Xytect as a basal soil treatment each spring or make a trunk injection treatment with an imidacloprid product. Research tests are now underway to evaluate the use of Safari and TREEage for control of soft scale insects. 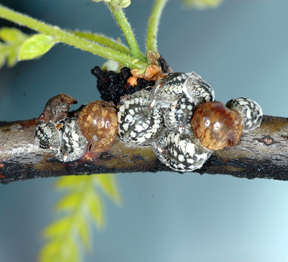 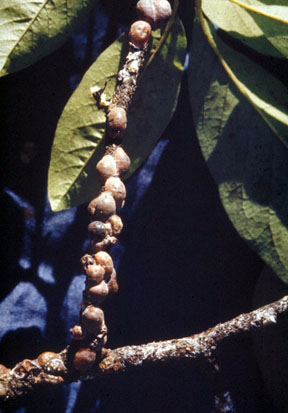 Protecting yourself and your farm employees from COVID-19