Youth participating in the 2016 4-H Great Lakes and Natural Resources (GLNR) Camp had the opportunity to test their wings as aspiring ornithologists (bird biologists). Learning about bird ecology, biodiversity, and conservation were the goals for these campers who gained eyes-on experience while searching northern Michigan habitats and identifying more than 40 bird species as they worked alongside avian ecologists from Michigan State University Department of Fisheries and Wildlife.

Each morning during camp, teens participated in a variety of Great Lakes and natural resource science sessions relating to watersheds, fisheries, woodlands and wildlife, bird ecology, a climate expedition, and more. The bird ecology session offered a chance for campers to turn their eyes, ears, and minds to the skies while learning what it means to be an ornithologist.

Birds of a Feather science session:

Campers experienced first-hand how researchers use mist nets (hard-to-see netting set up roughly like volleyball nets) to capture flying birds for scientific study. Northern cardinals, blue jays, and Eastern phoebes were among the species captured in nets during early morning sampling; and youth experienced a rare opportunity to assist in identifying and recording data on each species. Once captured, campers learned about handling the birds safely and properly, as well as the wide variety of scientific data that might be collected from a bird such as species, age, body condition, weight, and more before releasing the birds back into the wild. Youth also explored northern Michigan habitats alongside experienced birders, learning how to identify a variety of bird species by sight and sound, as well as the unique life cycles and adaptations of birds.

Led by Andrew Dennhardt and Kim Fake, MSU Fisheries and Wildlife graduate students, and aided by Kirsten Johnson, a graduate student from the Department of Biology at Indiana University of Pennsylvania, and Cindy Hudson from Michigan Sea Grant, campers learned about ornithological careers, as well as how science is used to better understand and respond to threats to bird populations such as habitat loss and fragmentation, predation by domestic and feral cats, disease and pesticides, or climate change.

Hands-on science and career explorations, environmental stewardship and recreating in Michigan’s outdoors – all are part of this 4-H camp experience. Youth gain a new 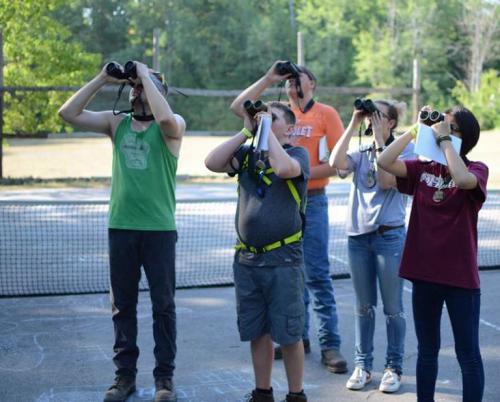 perspective and appreciation of Michigan’s Great Lakes and natural resources; and perhaps their own roles as environmental stewards and future community leaders. And who knows, perhaps the next generation of avian ecologist will fledge from this camp experience!