Another exotic invader has quietly spread into inland lakes and rivers. This large snail is sold by pet stores, water garden suppliers, and live food markets, but it can become a nuisance to swimmers if released from captivity.

While the threat of Asian carp has prompted multi-million dollar efforts to monitor their spread, other invasives have gone unnoticed for decades. One of these lesser-known species is the Chinese mystery snail – an aquatic snail that grows much larger than snails native to Michigan lakes. 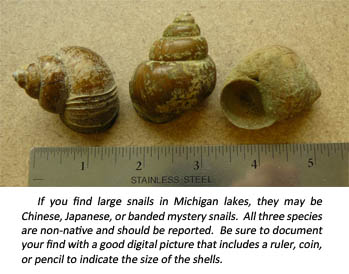 Judging by records in the online Great Lakes Aquatic Nonindigenous Species Information System (GLANSIS) database, they are not as widespread in Michigan waters. Prior to 2005, they had only been recorded from two rivers – the Grand and the Kalamazoo. Since that time, they have shown up in bayous of the lower Grand River, the Thunder Bay River, and several inland lakes. These lakes include popular boating and fishing lakes like Houghton Lake, as well as smaller lakes with little or no public access.

Does this mean that Chinese mystery snails are rapidly spreading through Michigan waters? Probably not – in fact, they have likely gone undetected in many lakes for decades. For at least twenty years, swimmers in Badger Lake have been annoyed by large snails that sometimes carpet the sandy bottom off the lake’s small beach. Worse yet, outbreaks of swimmer’s itch seem to occur in years when snails are abundant.

At this point, we know relatively little about Chinese mystery snails in American waters. The first step is to determine where they have already invaded. If you find snails with shells over 1 and one-half inches long in Michigan waters, you have found an exotic species, and it is likely a Chinese mystery snail. To find out for certain, email a picture and a detailed description of when and where it was found to GLANSIS.

Remember that pet stores, water garden suppliers, and live food markets may sell many invasive species, including Chinese mystery snails. Never release captive animals or plants into the wild, and take proper precautions when moving boats and other equipment from one water body to another.

Is your water garden having a RIPPLE effect on Michigan's waterways?