Updated from an original article written by AGLC team.

Establishing the cost of production of coffee to farmers in Rwanda supported a substantial adjustment in the national coffee floor price, benefitting over 355,00 households. 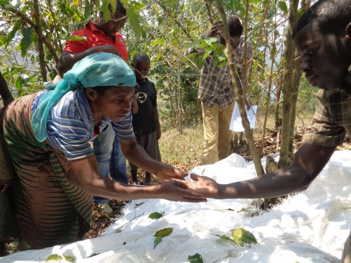 “Why do you grow coffee?” “See, it brings cash.” This is the response from many Rwandan farmers, including Ms. Beata Nzeyimana.* [1] Rwandan farmers pick the red cherries off shrub-like trees. These farmers see the cherries that contain the coffee beans being converted to their light tan parchment stage. Some may also have seen the hard, stone-like green beans which are exported after the parchment is hulled. But very few coffee farmers have actually seen the beans turn dark while being roasted, and probably less than 1% have ever tasted a cup of coffee. They farm coffee because they know they can sell it. For farmers such as Ms. Nzeyimana, coffee is the main source of cash for the entire household, and is obtained over one season for the entire year. She has been a widow for 23 years now. Her daughter is grown up and lives in the same house along with her two children. Ms. Nzeyimana also sells a few vegetables, does some tailoring work, and earns some wages helping a neighbor harvest his maize. But coffee makes at least 50% of her income. She depends on it for many needed items, from clothing to medicine, to paying school fees for her grandchildren. It also gives her credibility with those in the village who can give her a loan.

Coffee plays this central role for 355,000 rural households in Rwanda, and the cherry price can mean the difference between an unbreakable cycle of rural poverty and a country with thriving communities across all of its districts, not just the urban areas.

In July 2016, Ms. Nseyimana explains that her “200 coffee trees did not make her a profit. At the 2016 coffee price, her labor (approximately 130 hours for the season) was not fairly compensated. She had received 150 RWF/Kg (equivalent to USD 0.18/Kg) for the cherries she had harvested that season. Since each tree produces an average of 1.5 Kg cherry, her coffee income last year was about 45,000 RWF (USD 54). The mean value of household labor invested in coffee is 93,000 RWF annually, meaning Nseyimana’s income loss from coffee was 48,000 RWF (USD 57).[2] Her cooperative did not provide her a second payment as they did a few years ago. When asked why she continues farming, she says, “if you don’t work, you don’t get anything. You have to get your hands out of your pockets.” She knows this from when she was a little girl and saw her parents farming coffee. “They didn’t lose hope and they only received 50 RWF/Kg cherry!”

Imagine Ms. Nseyimana’s amazement when in March 2017, at the beginning of the next coffee season, a new floor price of 270 RWF/Kg cherry was announced. It was an 80% increase over the last year’s price! Later in April, the government brought it down to 240 RWF/Kg cherry, but even that amount looked great to someone like Nseyimana. Now her 300 Kg of cherry harvest would bring in 72,000 RWF (USD 86). Still not enough to pay herself a fair wage, but at least she could purchase more of the cash items needed or send one more child to school.

This happened because Rwanda’s National Agricultural Export Development Board’s (NAEB) was determined to use evidence to support their decision-making in the face of strong opposition from a few influential stakeholders in the sector. The Feed the Future Innovation Lab for Food Security Policy’s Africa Great Lakes Coffee Support Program (AGLC) provided NAEB with findings that established the cost of production of coffee to farmers. These results served as a basis for adjusting the national coffee floor price. NAEB officials participated in the AGLC’s discussions with coffee industry stakeholders via a series of roundtables and presentations. Some of the meetings demonstrated the staunch resolution from the office of the Minister of Agriculture to the Director of NAEB and the director of the Coffee Division at NAEB, that the floor price could not remain at “poverty coffee” levels. Rwandan policy-makers are adamant about their objectives to see coffee help lead the country out of poverty. If they continue their reforms and include persistent farmers like Beata Nseyimana, it seems likely they will achieve their goal.

Demand for Imported versus Domestic Fish in Nigeria

Analysis of the Value Chains for Root and Tuber Crops in Malawi: The Case of Cassava