What do consumers really think about how dairy farmers care for dairy cows and modern dairy cow housing once they have been down on the farm?

The public often hears in the media and from special interest groups that animals are housed in poor conditions, treated poorly and forced to perform at high levels. But what do consumers think after they’ve toured a modern, and in some cases, very large modern dairy farm? Not what the media sometimes presents or what some special interest groups want people to believe. In general, 95 percent of consumers leave with a positive or very positive impression about animal housing and 91-96 percent have high or very high trust the dairy farmers will do the right things with regard to caring for their animals. These values represent a large shift from their assessment before their farm visits, especially for those visiting dairy farms for the first time in 20 years.

These values come from exit surveys from individuals participating in Breakfast on the Farm (BOTF) educational farm tours, some involving dairy farms ranging from 200 to 3,500 cows in Michigan, Ohio and Vermont. These events include tours of the farm facilities with educational stations about numerous topics that are of interest to the public. Volunteers including veterinarians, nutritionists, farmers and other professionals who try answer questions for participants staff the stations. Exit surveys from events in three states show that consumers are giving high ratings for animal care and dairy housing. Since its inception in 2009, Michigan’s BOTF, a program of Michigan State University Extension, has held events on 29 dairy farms, three beef operations, one apple orchard and three crop farms. These events have hosted over 85,000 visitors. Ontario has hosted several events patterned after the Michigan events and in 2015, both Ohio and Vermont began hosting BOTF events.

BOTF events were held on 10 dairy farms in 2010 and 2011 with over 16,000 in attendance. Data from 1,500 exit surveys show a large shift in their impressions about how dairy cows are housed before and after their educational farm tour. Figure 1 shows the shift in distribution before and after their farm tour on a 5-point scale with 1 being very negative to 5 being very positive impression. Herd sizes for these farms ranged from 200 to 3,500 milking cows. Herd size did not affect responses.

Figure 1. Shift in the public’s general impression about housing provided to dairy cows before and after their farm tour.

The percent of farm tour participants who rated their impression of dairy housing as positive or very positive shifted from 62 percent before the tour to 95 percent after the farm tour (Figure 1). They did this rating as they completed a survey upon exiting the farm, so their before assessment was done at the same time as their after assessment. This allowed them to indicate their change in impressions on the same scale. The percent that rated their impression of housing as very positive double from 35 percent to 76 percent and the 8 percent who rated housing negative or very negative before their visit dropped to 0.5 percent negative and 0.1 percent very negative after the tour. Interestingly, in this dataset, 17 of 31 who rated housing very negative before their tour rated housing very positive after the tour suggesting that they came with misconceptions of how dairy animals are housed on modern farms.

Events in 2015 show increased trust in animal care and housing

In 2015, events held in Ohio hosted by Ohio State University Extension and Vermont, coordinated by Vermont Agency of Agriculture, Food and Markets and others attracted 3,009 and 550 participants, respectively at dairy farms with 700 cows and 250 cows, respectively. Five Michigan events in 2015 included dairy farms ranging from 500 to 3,500 cows hosting 12,068 participants. BOTF is designed to attract those who have not been on farms recently. The percentage making their first visit to a working dairy farm in the past 20 years were 37 percent, 60 percent and 25 percent respectively, for Michigan, Ohio and Vermont. In 2010 Michigan first time visits were 44 percent of the total. Since then, a number of participants have returned to events. Vermont has a number of educational farms that individuals may have visited making their number a bit lower. Those who had made five or less prior visits included 73 percent in Michigan, 88 percent in Ohio, and 62 percent in Vermont. Data from Michigan, Ohio and Vermont included 1406, 578 and 220 surveys, respectively, and were analyzed to determine the change in participants’ level of trust in several management areas. We focus here on animal housing and care.

Trust that farmers will do right

As with earlier results, first-timer visitors’ level of trust was lower than for all participants before their tour with values of 61 percent, 65 percent and 65 percent for Michigan, Ohio and Vermont, respectively, with high or very high trust. Based upon their assessment as they exited, 96 percent in Michigan, 91 percent in OH, and 96 percent in Vermont, left with high or very high trust. In all three states about 30 percent were undecided or neutral about their level of trust before their visit. Few left with low or very low trust that farmers will do the right thing regarding animal housing, i.e., percentage of visitors with low levels of trust dropped from 8.6 percent to 0.6 percent in Michigan, 8.5 percent to 1.3 percent in Ohio and 4 percent to 2 percent in Vermont.

Once consumers saw and understood how animals benefited from modern housing their trust that farmers would make the right decisions regarding housing their animals significantly improved. One individual from People for the Ethical Treatment of Animals (PETA) commented to a volunteer at the exit survey tent at an event in Mason County, Michigan, that they were going to tell their membership that the cows they saw were clean and well cared for on this dairy farm. Not what they expected.

So what kind of housing do consumers find down on the farm?

Most milk cows today are not housed in red barns and fed from tower silos. Housing has changed to meet the needs of the high-producing cow. Cows in freestall barns do well because they have free access to a total mixed and well-balanced ration, clean, dry stalls, and outstanding shelter. Their barn environment allows freedom of movement and likely has fans and curtain walls that go up during the summer months, making them especially comfortable on hot, sunny days, and down in the winter months to block the wind and snow (Figure 2). Cows are managed to protect them from wind, rain, snow and mud. 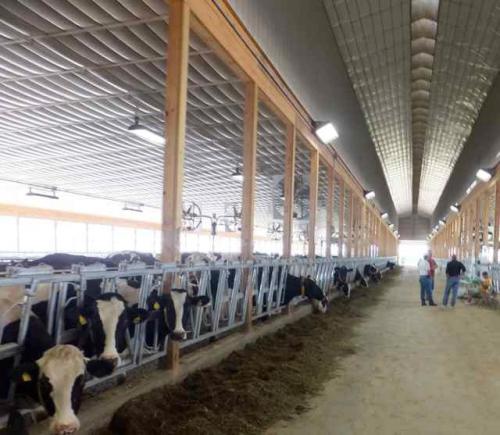 Change in trust that dairy farmers are caring for their animals

Some came with concerns

The opportunity to openly walk on a modern farm, talk to farmers and others involved in the dairy industry and to see, read and hear about the advantages of modern animal housing and steps that farmers take in caring for their animals creates a significant shift in participants impressions and trust. This is even more so for those who come with concerns. From the educational displays and talking to volunteers, participants learn about the care given to animals including balanced rations, health care and how professional nutritionists and veterinarians are involved on farms.

This transparency has an impact even with operations with as many as 3500 milking cows. Participants also see the community support from the 200 to 400 volunteers. This overwhelms some participants, as does the number of people attending the breakfast. Some neighbors come to see how things are done because of concern or comments they have heard about agriculture’s impact on the environment. As do other visitors, they appreciate the opportunity to walk through host farms and appreciate the hard work to produce safe food and care for animals.

Consumers are bombarded with many messages about their food, from how unhealthy it is to how poorly it is produced in the U.S. When they get a chance to experience an educational tour on an operating dairy farm, their trust in how dairy farmers house and care for their animals goes up substantially. This is particularly true for those who are visiting a working dairy farm for the first time in recent years or those who have concerns about how food is produced on modern farms. Seeing housing systems being used on modern, well-managed dairy farms provides an experience one can’t get in the newspaper or on the Internet. Breakfast on the Farm participants get a sense that animals are receiving good care from farmers and they apparently like the way cows are housed as they give high marks with their shift in impressions and trust in animal care and housing. These shifts in impressions and trust speak well of the educational farm tour approach to helping consumers better understand how their food is produced and to the farmers who graciously open their doors to provide a transparent look at modern agriculture.