Planting corn when soil temperature and moisture conditions are most favorable is critical to uniform emergence and early establishment.

Monitoring soil temperature on the farm or at the nearest weather station will provide useful information for planning planting dates. Typically soil takes a longer time than air to warm up. A quick check of the Enviro-weather weather data from Leslie, Mich., shows the minimum soil temperatures at 2 inch depth during the past 7 weeks have hovered around 32 degrees F indicating that soils throughout Michigan remain cold (Figure 1). Michigan State University Extension advises the use of Enviro-weather as a best practice for farmers. This on-line weather service is provided free to Michigan farmers in 2013. 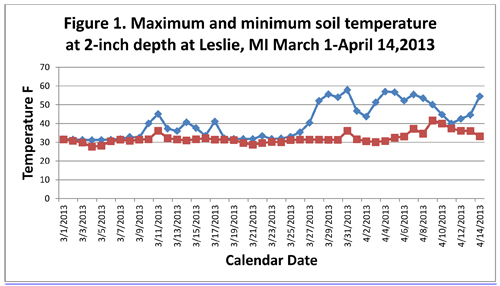 One of the many lessons learned from the 2012 season was the importance of waiting for the soil to warm up to the right temperature before planting corn. The abnormal, early warm weather in March in 2012 and higher than normal growing degree accumulations enticed some farmers to plant corn in early April, disregarding the soil temperature. This resulted in chilling injury to seeds and uneven emergence and stand loss. Previous research has shown that the optimum corn planting period in Michigan is the beginning to middle of May, when soil temperature and moisture conditions generally becomes most favorable.