There are several reasons other than grubs that may keep turfgrass from greening up, like deicing salt injury and dog spot.

I always joke when talking with homeowners about turfgrass that if I show them pictures of different turf problems, they’ll guess grubs are the problem nine out of 10 times. Now that yards are finally green and growing, there are several maladies besides grubs that may be preventing green-up.

Turfgrass damage from deicing salt applications during winter is most commonly found on the borders of sidewalks, driveways and roads. The turf dies due to the salt burn or salt buildup in the soil resulting from continuous deicing applications.

Remedies for alleviating existing damage and getting the turf back to growing include applying calcium sources such as gypsum to replace sodium (salt) on soil cation exchange sites, and then using irrigation or rainfall to leach the remaining salts from the soil. In many situations, gypsum applications are not necessary and spring rains are adequate for leaching excess salts out of the root zone. Reseeding or sodding damaged areas is often necessary.

Although the cause of damage is different, injury from dog spot is essentially the same as injury from deicing salt injury. The turf dies due to salt buildup in the soils from the continual doggy “deposits.” On the margins of the blighted areas you’ll likely see excessive growth from the nitrogen released.

Depending on your patience level, the turf may creep laterally over the damaged area, which I’ve personally witnessed may take well into July. The faster solution is to rough up the soil surface and reseed the most severely affected patches. Occasionally I’ll receive a request from a homeowner asking me if there are products I can recommend for their dogs diet that will reduce damage from dog urine. I am not a veterinarian, I’m a turf specialist. I’ll give you recommendations for feeding the turf, but not the dog. 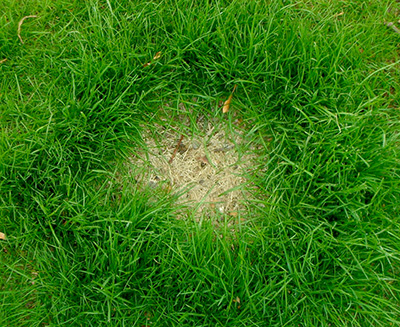 Confirming grubs in your lawn

In my opinion, grubs are one of the easiest turfgrass problems to diagnose. They will be feeding in turf until approximately mid-May. If you think it might be a grub issue, go to the edge of the green and brown turf and try to pull it up or roll it up like a carpet. If it’s grubs, you’ll see them there just under the turf.

For further information on grubs and grub control please see “How to choose and when to apply grub control products for your lawn” from Michigan State University Extension. 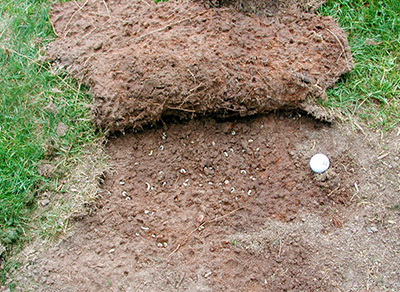 Don’t sweep your leaves to the curb! Mulch them back into your lawn or garden

What can I do about Japanese beetles landing on our golfers?