Downy mildew confirmed in Berrien County for the 2018 season.

Growers on the west side of Michigan should consider fungicide sprays for cucumbers and melons (watermelons, cantaloupe, muskmelon) now that downy mildew has been verified in Berrien County on July 24, 2018. The downy mildew infection on the leaf sample from Berrien County was advanced with heavy spore production. It is likely that additional cucurbit fields in this county and nearby counties are also infected with the downy mildew pathogen and should be protected with recommended fungicides. Growers in other areas of the state should remain vigilant, scout their fields for downy mildew and consider applying a fungicide.

Last minute rescue applications of fungicides fail to limit downy mildew and protect the crop. Several fungicides are no longer effective as a result of pathogen resistance. Field trials show an infection that is not effectively managed causes yield loss and fruit distortion. Plants must be protected preventively before the pathogen becomes established.

An important fact is that when the weather conditions are especially favorable for downy mildew, timing of fungicide applications becomes crucial. In our Michigan State University field plots, when the plants become infected almost immediately after emergence, it is challenging to limit disease development. 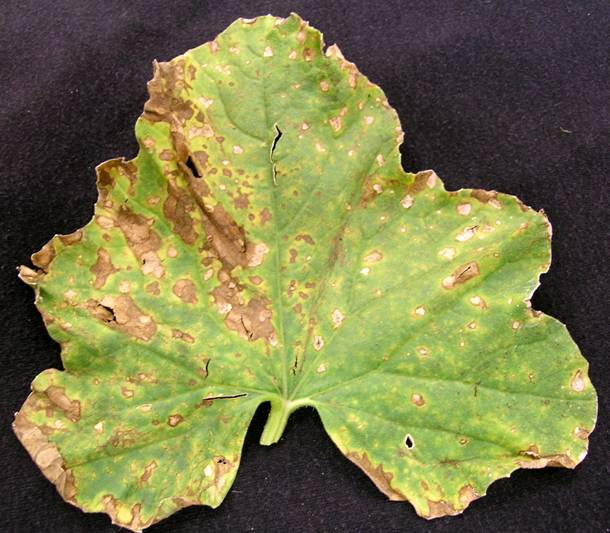 Given the later appearance of downy mildew in the state this year, the first planting has been harvested without a downy mildew problem. The state’s second pickling cucumber planting is vulnerable. When temperatures exceed 90 degrees Fahrenheit and are accompanied by dry conditions, downy mildew is not favored. The return to more moderate temperatures and rainfall in some areas of the state will favor the pathogen and downy mildew disease.

Spore trapping for the pathogen has been ongoing in the state and overall, downy mildew spores in the northern and east side of the state have not been found in significant numbers so far. This information is posted and updated frequently. Go to the Downy Mildew News webpage.

Refer to the table below for fungicides to manage downy mildew.

This material is based upon work that is supported by the National Institute of Food and Agriculture, U.S. Department of Agriculture, under award number 2016-68004-24931.