Downy and powdery mildew are present in grapes. The period of highest fruit susceptibility has mostly passed, but infections may still be actively sporulating. Scout for symptoms and use a combination of protectant and systemic fungicides for control.

During the 2014 season, growers have been dealing with plenty fungal disease challenges due to frequent precipitation and moderate temperatures. While weather conditions often determine whether we will have a “downy mildew year” (wet) or a “powdery mildew year” (warm and dry), this year we have both diseases present to a greater or lesser extent in Michigan vineyards. This was caused by wet conditions during the spring and early summer, which promoted release of powdery mildew ascospores, initiating primary infections relatively early in the season. Powdery mildew fruit infections visible now occurred between bloom and about four weeks after bloom, during the period that the developing berries were highly susceptible. Once a berry is infected, it will continue to sporulate for weeks, unless the infection is so severe that the berry is killed. Wet conditions have also led to considerable black rot, Phomopsis and anthracnose pressure this year. We can also expect an outbreak of Botrytis bunch rot, unless dry weather prevails during fruit ripening.

Interestingly, we observed downy mildew, caused by the oomycete pathogen Plasmopara viticola, on Concord berries this year, which is the first time I have seen this. Usually, downy mildew is primarily a foliar disease on Concord and Niagara grapes, often not developing until later in the growing season and spurred on by nightly dew formation on the leaves in August and September. The pictures are of a sample of Concord grapes from southwest Michigan. The reddening of the berries was not associated with grape berry moth nor is it a sign of early ripening. It appears to be caused by anthocyanin production due to infection with downy mildew.

The infection must have occurred when the berries were still fairly susceptible to infection during the first two to three weeks after bloom and was likely initiated by germinating oospores from overwintered infected leaves on the ground or from sporangia produced on primary leaf or shoot infections. It was obvious that some of the berry stems were killed by the pathogen, which led to the assumption that it could be Phomopsis. However, you would never see Phomopsis just on berry stems as it would also be present on the rachis. In fact, you would see rachis lesions before you would see berry stem infections. 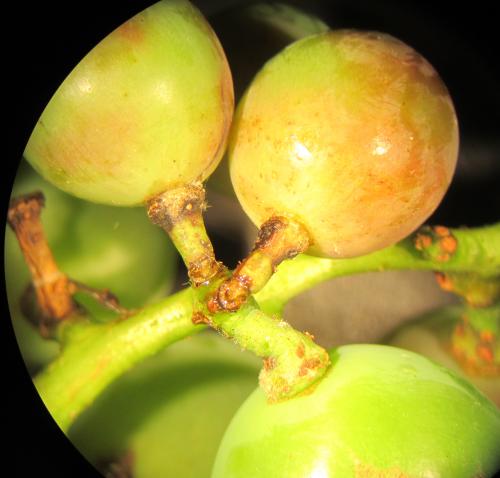 For disease control recommendations from Michigan State University Extension, refer to an article written earlier this summer, “What to do when you start seeing disease in the vineyard: Post-infection treatments,” on controlling powdery mildew and downy mildew when symptoms are already present. Remember to ensure thorough fungicide coverage and to observe the pre-harvest intervals on the label.