Make sure you are using the appropriate timing and treatments when controlling European chafer grubs in turf.

Several homeowners in northern Michigan contacted Michigan State University Diagnostic Services this past week looking for help for their dying lawns. Specimens of white grubs collected from a golf course in Kincheloe, Michigan, and a lawn in Iron Mountain, Michigan, confirmed the problem to be European chafer grubs, Rhizotrogus majalis (Coleoptera: Scarabaeidae).

The woman from Kincheloe who sent in the grubs also sent in a short video that shows the extent of the damage to the golf course she lives on. She reported large flocks of crows and gulls congregating on the fairways to feed on the grubs. We also have reports of grub damage in Hancock, Michigan, in the Keweenaw Peninsula, so the outbreak appears widespread throughout the Upper Peninsula.

European chafer is most damaging when it first becomes established in an area. After four to 10 years, the population falls to a level that grubs might be detectable, but damage is unlikely. Most of the southern part of the Lower Peninsula is now in that situation.

The European chafer was first discovered in Newark, New York, in 1940. By 1996, it had spread to Connecticut, Massachusetts, New Jersey, Ohio, Pennsylvania, West Virginia, Michigan and Ontario, Canada. It has been destroying lawns in the Lower Peninsula ever since. European chafers are usually thought to be turf pests, but many field, vegetable and nursery crops are also attacked by the root-feeding grubs.

European chafer adults resemble June beetles. Adult beetles emerge from the soil between mid-June and early July in southern Michigan. Emergence may be two to three weeks later in the Upper Peninsula. Adults usually swarm in large numbers around trees and other tall objects at dusk on warm evenings. These swarms may be alarming to nearby residents. They occasionally nibble on leaves, but don’t cause serious harm to trees and shrubs. Egglaying occurs during this time. The eggs hatch a few weeks later and the grubs begin to feed on grass roots immediately.

The grubs undergo two molts by the first of October in southern Michigan and reach a length of .075 to 1 inch long. They continue feeding in late fall until the freezing soil drives them below the root zone. In spring, the grubs move back to the root zone where they commence feeding again. By late May, most grubs have ceased feeding and have pupated in southern Michigan. Again, this probably occurs two to three weeks later in the Upper Peninsula.

European chafer grubs are normally found 2 to 3 inches below the soil surface this time of year. If you think you have a grub problem, look for the grubs at the edges of the dead and damaged areas of the lawn. They are large, C-shaped larvae with a complete head capsule and three pairs of legs on the thorax behind the head. 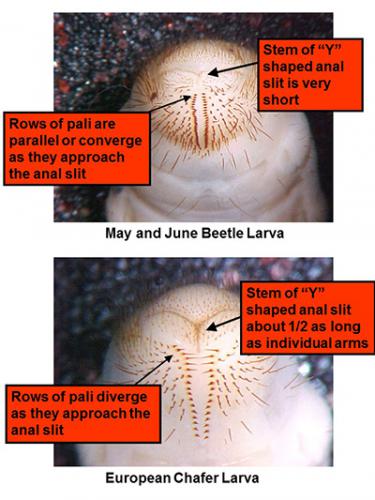 The best method to control European chafer damage is to apply a preventative insecticide like Merit, Bayer Season Long Grub Control and Grub-X in early July. Please note these preventative insecticides are not effective against this pest when applied at other times of the year. During spring or fall, Sevin or Dylox can be used to control European chafer grubs in turf and ornamentals in open soil plantings. Sevin should only be used if the soil pH is less than 7.8.

Also, controlling adult beetles with insecticides will not have any effect on damage to turf by the larvae. Be sure to read and follow all the instructions and safety precautions found on the pesticide label before using any pesticide.

For more information on choosing the right insecticide for grub control, see “How to choose and when to apply grub control products for your lawn” by MSU Extension.