Near record-breaking rainfall amounts in June have resulted in some turfgrass areas starting to suffer from waterlogged soils, diseases and nutrient deficiencies.

June 2015 was among the wettest months ever recorded in many areas of Michigan. In the Lansing, Michigan, area we received 9 inches of rain, which is an impressive 5.5-inch departure from normal. Total precipitation in June for the entire state was above normal with many areas in the lower one-third of the Lower Peninsula receiving between 5 and 10 inches or more of precipitation. Combined with normal to below normal temperatures for most of June, cool-season turfgrasses were growing like crazy and keeping up with mowing was challenging to say the least. July has continued the trend of wet and cool, and these conditions are catching up with turf and starting to cause problems. 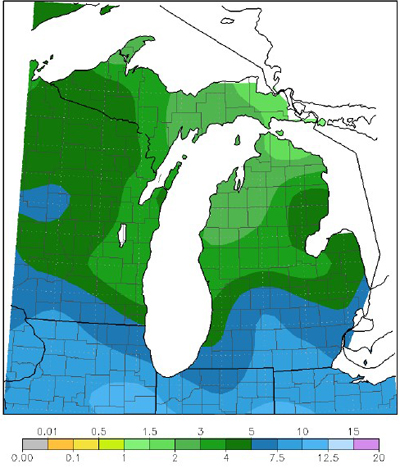 Total precipitation in inches for June 201

Excess and continued rain has resulted in saturated soils in many areas. Especially in poorly draining areas or on high clay content soils (also poorly draining), turf has taken on a yellow or chlorotic appearance. There are several reasons for the discoloration, but one of the main reasons is impairment of the root system. It doesn’t take long once the soil is saturated for soil oxygen levels to decline and root hairs to begin to die. As the turf’s root system becomes impaired, nutrient extraction and water uptake will be limited, which may also cause yellowing. Golf courses will solid tine putting greens to provide oxygen to struggling root systems during the summer. Solid tine aeration is similar to traditional hollow tine aeration with the exception being that a core of turf and soil is not removed. 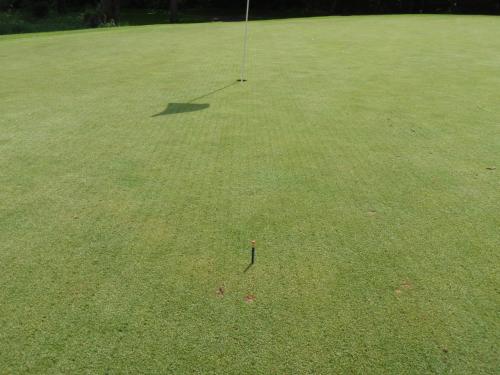 Disease activity is also increasing due to wet conditions. Rhizoctonia solani, brown patch, has recently started affecting turf. Although it doesn’t appear to be causing the typical patch type symptoms, it is definitely causing widespread yellowing and browning discoloration in affected turf.

Adding to saturated soils and disease kicking in, the surging turfgrass growth in June has also resulted in low fertility levels and declining growth. Pests that are often associated with low fertility turf have become numerous. Weeds such as black medic and white clover and diseases such as red thread and dollar spot have become problematic. Although herbicide applications will be necessary in most instances to remove the weeds, red thread and dollar spot can often be “outgrown” in lawn situations when a turf is healthy and actively growing. A dense, healthy turfgrass stand is more resistant to all types of pest pressure, so if it’s looking hungry, don’t be afraid to feed it.

How much water does your lawn irrigation system apply?

What are those dead grass tips in my lawn?

When should I fertilize my lawn during spring?