Fungi in lawns getting interesting

The rainfall over the last couple of weeks has resulted in some interesting sightings in lawns.

Mushrooms seem to be popping up in many different areas. When and where mushrooms will appear in turf is difficult to predict, but for those that have concerns, there is one general cure: mushrooms don't take a mowing very well.

Red thread (Laetisaria fuciformis) is a common sight in lawns and is often found around the time of seedhead production in the spring when the turf could probably use some nutrition. Fine fescues and perennial ryegrass typically are susceptible to red thread infestation, but I’ve also been seeing red thread in Kentucky bluegrass stands. Red thread is easily identified by the pinkish-red mycelium that is threadlike and surrounds the leaf blade. In some extreme cases, it might remind you of miniature balls of pink cotton candy. The areas infected by red thread will die and the turf may appear wilted.

Red thread can be mistaken for dollar spot in turf as the patchy-type kill is very similar. This is one of those diseases you need to get on your hands and knees to check out to make sure you know that it is red thread. Fungicide applications are usually not necessary in dealing with red thread; a fertilizer application will often help the turf outgrow the damage.

This is one of those diseases you see in the books, but don’t commonly see in Michigan. Slime mold typically starts as a bright yellow, orange, purple or gray blob that causes some to ask, “Who or what puked in the lawn?” 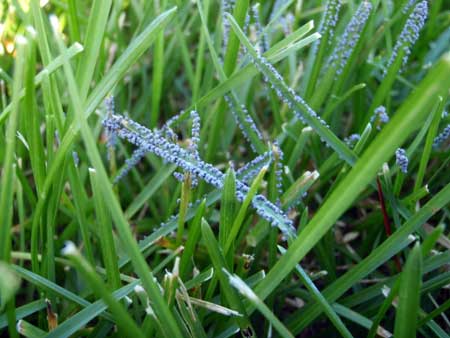 Generally, slime mold will only persist for a couple weeks. As conditions dry out, the slime mold changes and produces fruiting bodies full of spores that cover turfgrass leaves. Turf leaves may turn yellow during this period if they are completely covered by spores. Slime molds are not infectious and are considered one of those turf diseases that is more cosmetic than anything. Fungicides are not necessary. Washing the mold from the leaves or light hand raking will help get rid of it faster.