Over the last 25 months, gasoline has averaged $3.49 per gallon.

Over the past two decades, regular unleaded gasoline prices in the United States has increased and become more volatile. In the early 90s, prices held fairly steady from $1-$1.25 per gallon. In 2001, a new trend began – a rapid escalation in prices that peaked at $4.05 on July 14, 2008. There was a sharp drop in prices over the next six months followed by another run up in prices. The national average price of gasoline paid by consumers reached $3.50 on Feb. 20, 2012. 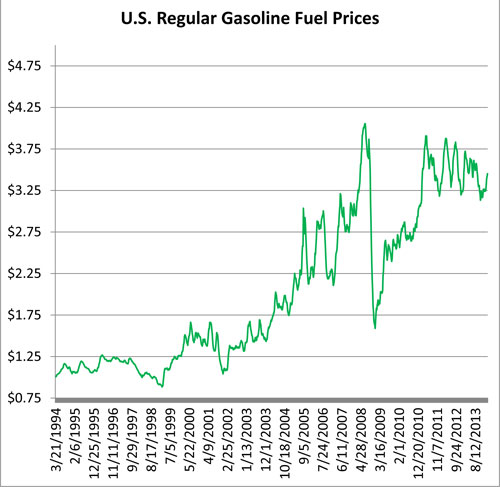 From the chart, you can see that prices have somewhat stabilized and the trend has been that fluctuations are in a much smaller range. Over the last 25 months, the average price for gasoline has been $3.49 per gallon.

According to the U.S. Energy Information Administration, total liquid fuels consumption is expected to remain flat in 2014. Crude oil prices are expected to remain flat or decrease slightly over the next 18 months. Domestic production of crude oil continues to grow while imports continue to decline. Increasing fuel economy in newer cars is allowing people to travel further on the same amount of fuel. In 2013, the United States consumed 8.77 million barrels per day of gasoline. This number is expected to be 8.79 and 8.78 in 2014 and 2015 respectively.

In 2013, 13.3 billion gallons of ethanol were produced in the United States which accounts for about 10 percent of gasoline demand. Cellulosic ethanol and biodiesel are renewable alternatives to petroleum. Michigan State University Extension is working on a variety of projects to help develop renewable energy solutions.

Can crop residue be harvested sustainably in Michigan?