A shorter interval of control is an indicator of fungicide resistance.

Like all summers in Michigan, the summer of 2016 was different! It started out relatively mild with a drought, and golf courses were barely able to keep up with wilting turf. Other than a few outbreaks of Waitea patch, there was little disease. Then the heat and the rains finally showed up in late July and through August. Not just nice, gentle rains, but downpours that often deposited an inch or more of rain in a very short period on many golf courses. The humidity increased with the rain, and along with it, the foliar diseases like dollar spot, brown patch and Pythium blight began to appear. The saturated soils also caused severe outbreaks of crown rot anthracnose.

We began receiving many phone calls complaining about the limited number of days of control golf course superintendents were getting from their fungicide applications. This was especially true of dollar spot control, where sometimes only a week of control was obtained with fungicides that used to last 21 days. This reduced interval of control is probably due to the dollar spot fungus becoming resistant to the fungicides that were being used. 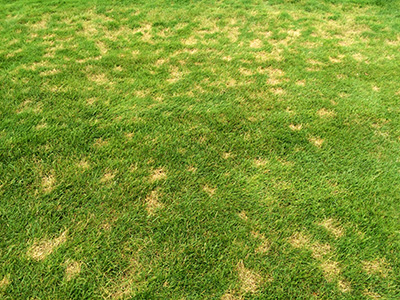 Many golf courses we visit are now facing a dilemma as their pesticide budgets are about all used up because of the fungicide resistance. To make matters worse, unseasonably warm weather and high humidity are continuing into September. However, given the option of going over the pesticide budget or not treating for disease, the choice should be to treat. If treatments are not made and the turf dies, there will be a reduction in play and greens fee revenue, making financial conditions even worse.