Great Lakes ice cover: Setting records during the Winter of 2013-2014

Thousands of years ago, the Great Lakes formed from ice, and ice continues to have a significant influence on each of the lakes.

Ice on the Great Lakes is more than just a signal of winter. The lakes, in fact, were formed over thousands years as glaciers advanced and retreated, sc 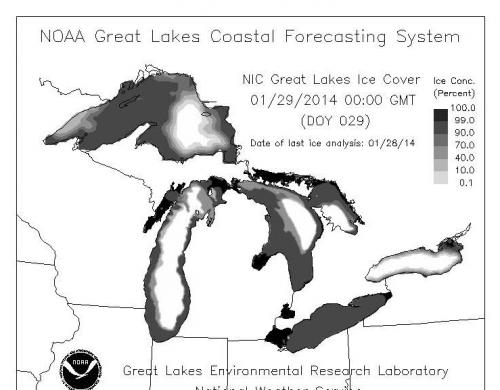 ouring and sculpting the basin. Ice cover continues to have a major effect on the Great Lakes, making it more than simply a connection to the past or a measure of winter’s harshness. Ice cover has an effect on almost every aspect of life on and around the Great Lakes, from hydropower generation, winter recreation, and commercial shipping, to the fishing industry and school closings. It also affects lake level changes in complex ways, as cited in a recent study by the Great Lakes Integrated Sciences and Assessments Center.

The amount of ice cover and how long it remains on the lakes during the winter season changes from year to year, and so far this winter we have had some very cold temperatures thanks to the Polar Vortex, which has resulted in a good deal of ice cover. Studying, monitoring, and predicting ice is important to determine climate patterns, lake water levels, water movement patterns, water temperature structure, and for predicting spring plankton blooms.

Ice cover on the Great Lakes can vary widely from one year to the next. Since 1973, the maximum ice cover over all of the Great Lakes was 95% in 1979, while the minimum during this period was only 1 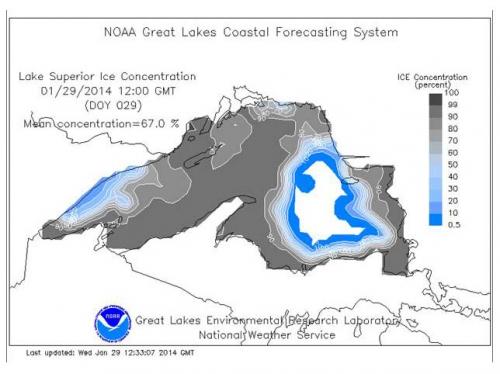 According to the Canadian Ice Service, as of January 20 the overall Great Lakes ice cover stood at just under 50%, the most in 20 years on that date and five times more than the past two years – with a full month of winter ahead of us. Data from the NOAA Great Lakes Environmental Research Laboratory showed that as of January 28, individual lake ice cover was as follows:  Lake Superior (51%), Lake Michigan (35%), Lake Huron (63%), Lake Erie (92%), and Lake Ontario (21%).

We may set additional weather records yet this winter, and it will be interesting to learn the extent of the maximum Great Lakes ice cover, once it has formed. In any case, with “real” winter weather extending well south of the Great Lakes—thanks to the wobbly Polar Vortex—we are experiencing some unusual weather extremes and sharing our winter weather with many who moved south to avoid it.