Habitat provided by eastern hemlock forests may be in jeopardy

The hemlock woolly adelgid is an invasive forest pest that threatens to establish itself in Michigan’s hemlock forests.

Landowners and forest recreation enthusiasts should be on the lookout for signs of the hemlock woolly adelgid when they get out to enjoy Michigan forests this winter. 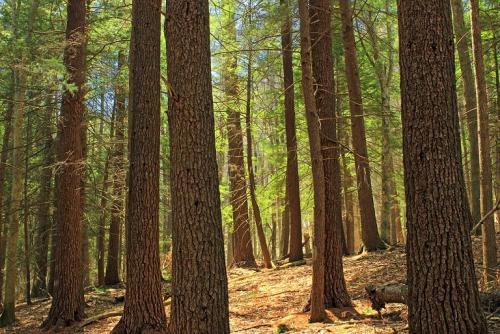 History of hemlock use in Michigan

As with many of the trees in Michigan, the majority of eastern hemlock trees were cut during the late 1800’s. The bark of the eastern hemlock was prized for its high content of tannins, which were used in the making of leather during the height of the trapping trade in Michigan. Synthetic chemicals have now taken its place. The majority of lumber production from eastern hemlock occurred between 1890 and 1910; the wood was used for light framing, sheathing, roofing, subflooring, boxes, crates and general millwork. In the current market, hemlock has little timber value.

Today, the importance of eastern hemlock dominated forests is tied to the wildlife habitat it provides. Eastern hemlock forests commonly occur on cool, moist coastal dunes of Lakes Michigan and Superior as well as on north facing ridges and ravines. The dense canopy created by the overlapping of the branches of mature hemlock trees offers white tail deer sheltered bedding grounds during winter months. In addition, larger hemlock trees often contain cavities which can be used by wildlife for shelter. Mice, voles, squirrels and other small mammals often eat the seeds from hemlock cones, and birds nest in the dense cover provided by the evergreen branches. Eastern hemlock trees also provide shade to cold water streams, which are common hosts to fish species like trout, juvenile salmon and sculpin throughout the Northern Lower and Upper Peninsulas of Michigan.

Michigan is in danger of losing these forests to do an invasive insect called the hemlock woolly adelgid. The hemlock woolly adelgid has been found in several urban locations along the western coast of Michigan. Extensive eradication efforts are believed to have stopped the spread of the adelgid to nearby natural stands of eastern hemlock. Please help stop any further incidence or spread of the adelgid by taking some time to closely examine any hemlock trees in your yard, neighborhood or favorite recreational forest. 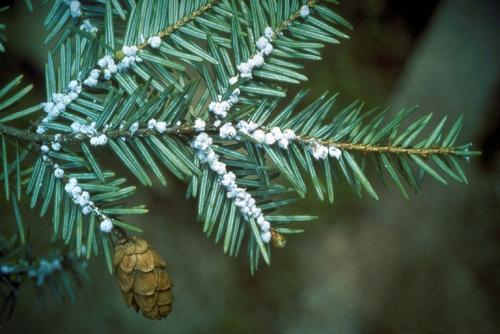 The most obvious sign of the hemlock wooly adelgid is white, waxy material that can be found at the base of the hemlock needles on the outer branches. Trees heavily infested with the adelgid may also exhibit a greying of the needles as the adelgids effectively damage the nutrient transporting cells during their feeding process.

If you find evidence of the hemlock woolly adelgid report it immediately to the Michigan Department of Agriculture and Rural Development (MDARD) immediately. You may call the MDARD Customer Service Center at 800-292-3939 or email MDA-Info@michigan.gov with the location of the suspected infested tree. Please also include your name and phone number for follow up contact if necessary.

Michigan Eyes on the Forest

Michigan State University Department of Entomology and Michigan State University Extension have teamed up to create the Michigan Eyes on the Forest program. The program, funded by the Michigan Invasive Species Grant Program focuses on educating people about invasive forest pests including the hemlock woolly adelgid. Other target invasive pests include the Asian longhorn beetle and thousand cankers of black walnut, which is a fungus pathogen that is transported by the walnut twig beetle. For more information about the program please contact Russ Kidd, Program Outreach Coordinator at kiddr@msu.edu or me, MSU Extension Natural Resources educator at crickjul@anr.msu.edu or at 989-275-5043.