Don’t spoil your summer fun by coming in contact with poison ivy, learn to identify it so you can avoid it.

Poison ivy is a plant you should learn to identify so that you can avoid it. An oily resin called urushiol, which is found in all parts of the plant, is what causes skin rashes when people come in contact with it. People vary in their sensitivity to poison ivy, but may become more sensitive after repeated exposure to it. One common misconception is that the poison ivy rash itself is contagious. The fluid in the blisters of a poison ivy rash does not contain urushiol and won’t cause the rash to spread. You won’t get poison ivy unless you come in contact with the oil still on someone’s skin or clothing.

Urushiol is easily transferred to clothing, skin, tools or pet’s fur. If contaminated objects aren’t cleaned, contact with the oil on them can cause skin reactions much later. Poison ivy should never be burned as the smoke from burning poison ivy contains the oil and can irritate lungs and nasal passages as well as skin and eyes. See the Michigan State University Extension Bulletin E2946 for more information on how to control poison ivy.

Poison ivy is a very widespread and prolific plant, frequently appearing along the edge of roadways, paths and other disturbed areas. One reason for its wide distribution is due to the fact that its berries are eaten by birds and deer. Over 60 species of birds have been documented to eat poison ivy berries. The seeds are not digested, but pass through the intestinal tract to be deposited throughout the active ranges of animals that eat them. Unlike humans, the animals eating the berries do not become sensitized to the volatile oils and do not experience allergic reactions to the plant.

Poison ivy can be a bit of a chameleon. It looks similar to several common backyard plants including Virginia creeper and boxelder. The leaves of poison ivy may be shiny or dull and the leaf margins may be toothed or wavy, or have no teeth at all. The leaves may be hairy, or have no hairs at all. Its appearance can vary greatly, but in all cases it has compound leaves that consist of three leaflets. The leaflets are 2-5 inches long, green during the growing season and turning scarlet red in fall. The leaves are arranged in an alternate pattern on the stem. The terminal (end) leaflet has a longer stalk than the lateral (side) leaflets. 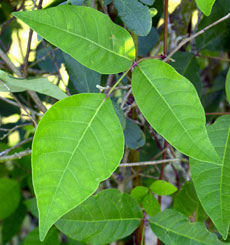 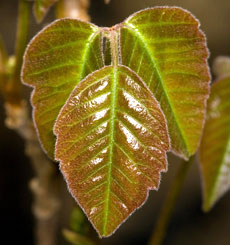 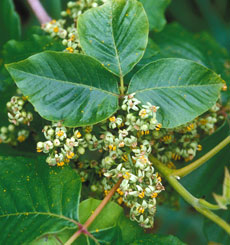 Poison ivy flowers in spring and produces dense clusters of white berries that ripen from late summer through fall and persist through the winter. Poison ivy can take the form of an erect shrub or climbing vine or grow in large colonies along the ground. Poison ivy has aerial rootlets that it uses to attach to the bark of trees. The rootlets have a hairy appearance. Twigs of poison ivy may be covered with fine hairs. The bark of poison ivy is gray. 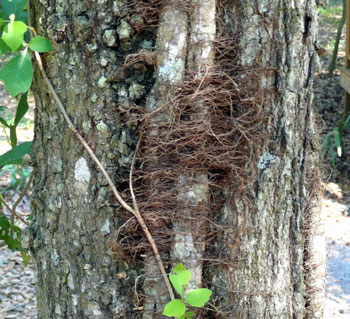 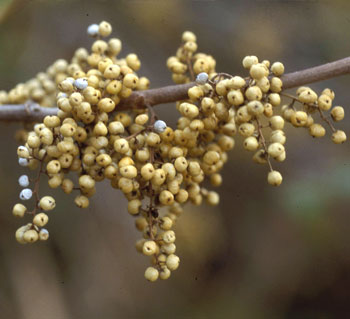 Virginia creeper, like poison ivy, has brilliant red fall color. Virginia creeper is a vine, closely related to grapes. Its leaves have five leaflets, although very young plants may have some leaflets that appear in threes. The leaves are arranged in an alternate pattern on the stem. It produces small clusters of greenish flowers in spring that mature to blue berries in fall. Although it clings to trees like poison ivy, unlike the distinctly hairy looking aerial roots of poison ivy, Virginia creeper adheres to trees and walls with small, circular pads on the ends of tendrils. 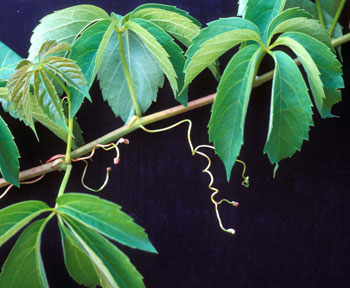 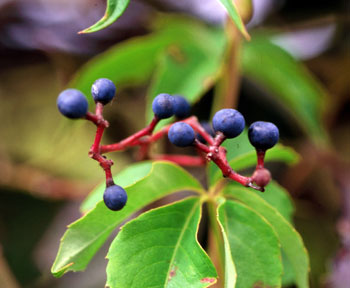 Young seedlings of the boxelder tree superficially resemble poison ivy. Boxelder seedlings grow to become large trees with green twigs and alternate compound leaves with three to seven leaflets. Boxelder is in the maple family, and is sometimes known as ash-leafed maple. Boxelder has yellow fall color, lacks the hairy aerial rootlets and does not have berries. The fruits are the typical maple seeds called samaras. 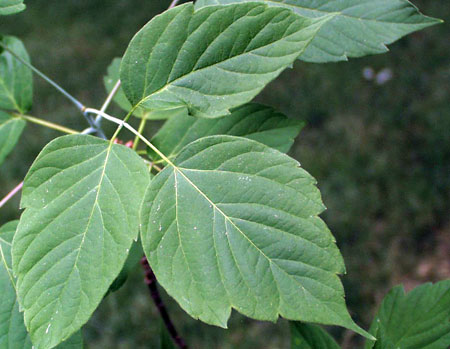