As part of the statewide monitoring effort for spotted wing Drosophila (SWD) detection in 2013, Michigan State University Extension has monitoring traps for SWD placed at 24 blueberry, caneberry and grape plantings located in Berrien, Van Buren, Allegan and Ottawa counties. In the past week (as of July 23, 2013), monitoring for this pest indicates that captures have tripled from an average of around one SWD per trap to over three SWD per trap at these sites. While these are not very high catches, the monitoring indicates a need for protection of susceptible crops that have ripe fruit. Additionally, with the cooler weather moving into the region, the temperature conditions will be much more conducive to the development of SWD than during the recent heatwave.

Average fly captures per week during the first month of SWD activity at southwest and west central Michigan berry and grape farms. 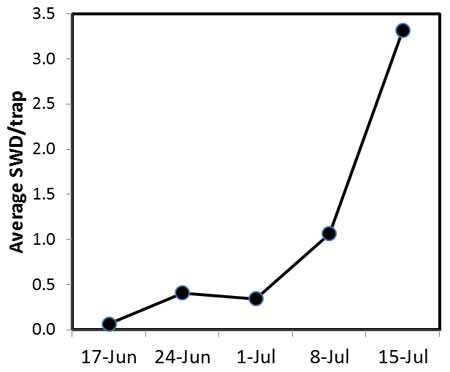 These average values come from a combination of 21 managed fields and three unmanaged fields, and it is instructive to split these out. The trend is upward in both types of sites, but the average catches of SWD are much higher at the abandoned fields (11.2 flies per week) than the managed fields (2.9 flies per week). The higher catches where the crops are not being managed for insect pests highlights that pest pressure from SWD will be increasing in the surrounding wild areas that contain berry forming plants in our region such as honeysuckle, wild blueberry, wild raspberry, etc.

This information from the traps indicates that the SWD population is building and highlights the need for growers of susceptible crops in southern Michigan to protect their crops from this pest. Details of the management options for blueberry and raspberry growers are available at our MSU Spotted Wing Drosophila website.

First capture of spotted wing Drosophila in Michigan for 2013