Keep an eye out for sawflies on your conifers

European pine sawfly in the Cadillac area are about 1.5 to 2.0 inches long now. South of here it seems they have finished feeding and are beginning to pupate. This insect rarely builds to high enough levels to significantly damage the health of trees, but we have seen some pockets in past years with large numbers of sawfly larvae causing sever defoliation. Often growers don’t realize they have a problem until they see the trees turn brown from the larval feeding. Make sure to walk through your fields. Scouting through the windshield you can mistake this browning for Lophodermium needlecast on Scotch pine. If you see small numbers of this little green larvae on your pine tree, just clip out the colony. Lots of predators and parasitoids like to attack sawfly larvae, too.

There are also several other sawfly species that feed in late June through late July. Watch for yellowheaded spruce sawfly on young, open-grown white spruce; larch sawfly on larch (tamarack) trees; and redheaded pine sawfly on red, Scotch and Jack pine; balsam fir sawfly on balsam and Fraser fir; and introduced pine sawfly primarily on white pine but also found on Scotch, red and Austrian pine. Sawfly larvae are often mistaken for caterpillars, but are actually a primitive group of insects related to wasps and bees. The larvae usually feed in colonies of 10 to 50 individuals and typically eat all of the needles or leaves from a single branch. The adult is a brownish or black fly-like, non-stinging wasp. When populations are high, these summer feeding sawflies can cause serious defoliation because they eat both new and old foliage. If sawflies are in small numbers, you can usually clip out the colony and mash or otherwise destroy the larvae. Insecticides will also kill these larvae, but be careful and only use these products if it is truly necessary to protect the tree since most sawfly populations are controlled by parasitoid wasps, and the wasps will be very susceptible to any insecticide that you use.

Note that Btk, a product often used to control leaf-feeding caterpillars, will not be effective on the sawfly larvae. 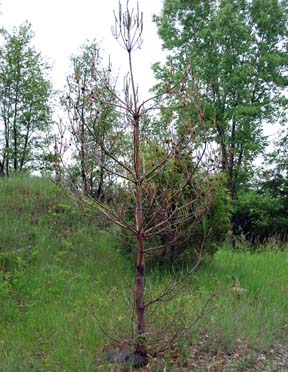 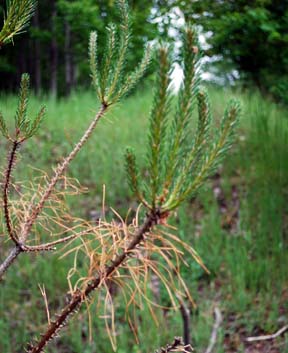