Over the past decade, Lake Erie has seen an increase of harmful algal blooms (HABs). These algal blooms are made up of cyanobacteria or what are also known as blue-green algae. These blooms are capable of producing toxins that pose a risk to human and animal health, impair coastlines and negatively impact communities and business in the area. Researchers within National Oceanic and Atmospheric Administration (NOAA) as well as the National Center for Water Quality Research (Heidelberg University) are providing early season projections of potential seasonal HABs in western Lake Erie. These bulletins are updated weekly (with the first report being May 17, 2016) until the final seasonal forecast is released in July. Beginning in July, the bulletins will switch to a twice weekly status of the lake and short-term forecasts on bloom location, severity, etc. NOAA has provided these weekly bulletins for HABs in Lake Erie since 2009.

The potential impact of HABs within the western Lake Erie is determined by the input of “bioavailable” phosphorus. Total bioavailable phosphorus (TBP) is comprised of dissolved phosphorus and particulate phosphorus, both of which are available for HAB development. Early season projections are based on TBP loading from the Maumee River during the “loading season” (from March 1 through July 31). For more information on the role that phosphorus plays in Lake Erie check out Michigan State University Extension’s article on “Agriculture's role in protecting Lake Erie.”

So far this spring there has been an average river loading within the Maumee River which is dependent on rainfall amounts. Currently, the forecast of precipitation over the next six weeks should be close to normal, which paints a very different picture compared to the heavy rainfall experienced in June of 2015. The current projection (as of May 17, 2016) is for a bloom that is milder than last year. The graph below is looking at the cumulative TBP loads for the Maumee River from March through August in 2011, 2012, 2015, and up to May 15, 2016. 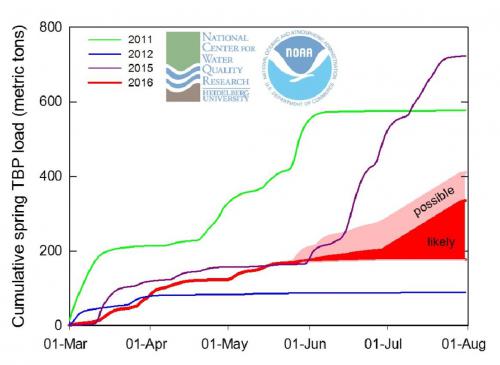 Producers do have the opportunity to keep track of rainfall amounts near them by utilizing Michigan State University Enviro-weather which provides weather-based management tools. For example, there is an Enviro-weather station located in Hudson, MI (there are many weather stations located throughout Michigan) where producers can access the latest observations including air temperature, rainfall amounts, wind direction, wind speed and much more. There are also specific tools for field crops, fruit, trees, turf grass, vegetables and landscape and nursery to help in making management decisions.

Feeding our crops, protecting our water in a changing climate