Lake Huron - the H in HOMES.

The acronym HOMES helps us remember the names of the five Great Lakes. This article focuses on the H in HOMES—Lake Huron.

Lake Ontario - the O in HOMES

Lake Huron is the second largest of the Great Lakes and the fourth largest freshwater lake in the world. It is hydrologically connected to Lake Michigan at the Straits of Mackinac, so the two share a common lake level and could be considered one lake. Lake Huron also includes the two largest bays on the Great Lakes, Georgian Bay and Saginaw Bay. Georgian Bay, alone, is large enough to be one of the world's 20 largest lakes. Lake Huron has inflow from both Lake Superior and Lake Michigan but has a shorter retention time than either – 21 years. 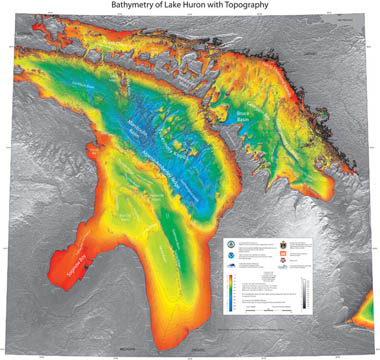 The Lake Huron basin supports a varied economy with strong industrial, agricultural and recreational sectors. Lake Huron serves a critical role in Great Lakes shipping. Vessels loaded with raw materials and finished goods move from Lake Superior and Lake Michigan through Lake Huron to the urban and industrial centers along Lake Erie and Lake Ontario. The lock system in the St. Marys River at Sault Ste. Marie makes this transfer possible. Michigan's Thumb region leads the nation in producing dry beans, and other crops grown in the 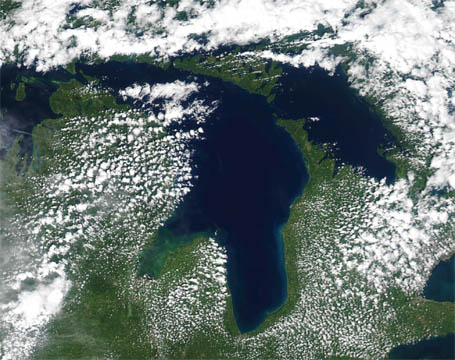 Many vacation cottages cluster on the Lake Huron shoreline, and each year millions visit national, provincial and state parks, and underwater preserves/parks in the Lake Huron basin. Underwater preserves/parks are special areas in the lakes designated by Michigan/Ontario to protect shipwrecks and other cultural and geologic resources. MSU Extension has worked with coastal communities throughout the state to develop Michigan’s network of Bottomland Preserves. In 2000, Michigan's Thunder Bay Underwater Preserve near Alpena, Michigan, also became the United States' first National Marine Sanctuary in the Great Lakes.

MSU Extension andMichigan Sea Grant offer many opportunities to learn more about Lake Huron and the other Great Lakes, with educational opportunities such as the Great Lakes Education Program, Summer Discovery Cruises, and 4-H Great Lakes & Natural Resources Camp. And, in July of this year, Michigan Sea Grant Extension led a weeklong professional development workshop on Lake Huron for teachers aboard the R/V Lake Guardian.  See the workshop blog for details!

How much do lake trout and Chinook salmon really eat?