An insect responsible for the loss of much of the eastern United States Appalachian region’s hemlock trees has found its way into Michigan. The hemlock woolly adelgid poses a threat to the state’s valuable hemlock stands. We need a call to action.

An insect responsible for the loss of much of the eastern United States Appalachian region’s hemlock trees has found its way into Michigan. The hemlock woolly adelgid poses a threat to the state’s valuable hemlock stands. A call to action by citizens may be the most realistic path to further detection and control.

Eastern hemlock (Tsuga canadensis) is an important tree across the state, both in terms of the ecological services this species provides in forests and because it has long been a popular landscape tree. In forested regions, the dense canopies of hemlock trees provide shade in the summer and critical thermal cover in the winter for many birds and mammals. Even in northern hardwood stands, where hemlock is only a minor component of the overstory, hemlocks provide valuable nesting habitat and food for a wide variety of wildlife.

In a landscape environment, eastern hemlock’s deep green foliage, short, flat needles and small cones provide a wonderful, low-maintenance backdrop for homeowners. Shade tolerant hemlocks do well even when planted below or in close proximity to other trees. When planted together, hemlock can provide a functional wind break or visual screen.

First reported in the eastern United States in 1951 in Virginia, the exotic hemlock woolly adelgid (HWA) (Adelges tsugae) has expanded its range through much of the east coast, including New England. The tiny aphid-like insect feeds by sucking sap from the twigs at the base of the tree’s needles. In North America, HWA is parthenogenetic. In other words, all individuals are female with asexual reproduction, which allows their numbers to build rapidly. Trees generally don’t die until they have been infested by HWA for at least four to five years and sometimes as many as ten years. But, HWA will eventually reduce the vigor of the tree. Mortality can be a direct result of HWA or can occur when HWA coincides with droughty conditions or other pest problems. In the Shenandoah National Park, for example, estimates indicate 95 percent of hemlocks have been killed by HWA.

Recently, localized infestations of HWA were identified in areas along the Lake Michigan shoreline from the Holland area north to Whitehall. Thought to have been introduced on nursery stock, the currently infested trees are primarily in landscape settings. Infested trees are characterized by the white “wool” where the needles attach to the woody shoots. The white woolly material is called “ovisacs” and is secreted from pores in the bodies of the HWA as they feed. The white ovisacs protect the adelgids and their eggs from predators and from desiccation. 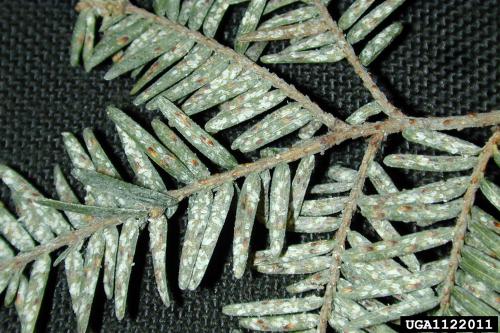 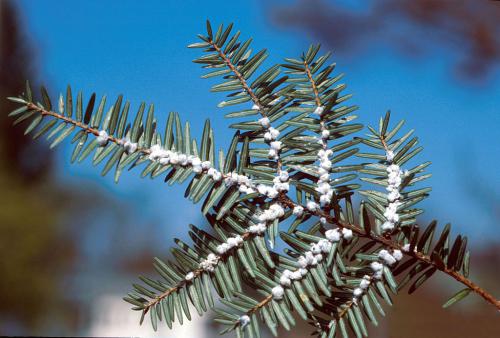 The Eyes on the Forest program, offered through Michigan State University Extension, provides a chance for interested citizens to become active participants in monitoring and detecting HWA and other invasive pest species. Volunteers agree to select a “sentinel tree” on their own property or in a nearby park or forest and then monitor the condition and health of the tree two or three times a year. Those observations are uploaded to an online website called the Midwest Invasive Species Information Network (MISIN). Educators from MSU Extension can provide volunteers with instructions for monitoring trees and for entering the data.

It is MSU Extension’s goal to develop an extensive network of sentinel trees across Michigan. Volunteers can select and monitor any species of tree. While there is great concern about HWA, there are other invasive forest pests that have not yet become established in Michigan. The Asian longhorned beetle, for example, which attacks maples and several other types of trees, remains an ongoing concern. Sentinel tree volunteers are needed, so if you would like to be an active participant in this program, please let us know. You can contact Mike Schira at schira@msu.edu or Russ Kidd at kidd@msu.edu if you’d like to volunteer. More “eyes on the forest” are needed to help us better protect our valuable tree resource.