Projects to improve convenience and safety for pedestrians and cyclists downtown are good placemaking strategies for retaining and attracting talent.

In today’s New Economy, where quality of life amenities matter for attracting talented workers and residents young and old, one basic placemaking strategy for communities is to better accommodate bicyclists and pedestrians. One reason for doing so is that market preference data shows a strong preference for walkable and ‘bikeable’ communities among Millennials. In short, investing in bicycle infrastructure generates returns (not to mention, good urban form promotes walkability and physical health).

The City of Marquette, Michigan understands this concept. After obtaining a grant from the Michigan State Housing Development Authority to hire consultants to prepare a subarea plan for a busy mixed-use corridor in the city, this summer, Marquette began implementing the plan with a variety of techniques (see Lighter, Quicker, Cheaper Placemaking helps Marquette achieve its vision). Most recently, the city improved the visibility of crosswalks along the corridor with new paint and added a new bike lane and sharrows to the street.

Third Street in Marquette has seen many changes over the years. Changes over the last decade and half that concerned city planners included the gradual loss of building density along the corridor as private parking lots were added and drive-through businesses crept in. Since the street has a mixture of uses, including residential, commercial, and office, the loss of density was not only contributing to a loss in the number of businesses (i.e. reasons to go to Third Street), it was also contributing to a loss in the number of people living in buildings along the street. Further, walkability of the corridor – another key feature of urban retail – was compromised with lost density and increased orientation towards the automobile. Needless to say, the trends were not favorable for urban retail to flourish.

The Third Street Corridor Sustainable Development Plan called for changes to the street cross-section to improve the transportation/land use connection. It also called for zoning changes to encourage infill and discourage further loss of building density. On the transportation side, the plan called for a different treatment for bicyclists on Third Street than the average downtown street. The right-of-way is rather narrow to accommodate all modes of transportation – each occupying its own space (e.g. two travel lanes, on-street parking, bike lanes in both directions, wide sidewalks, and other streetscape amenities) – and eliminating parking would be a death knell for urban retail. So, planners ultimately realized that the hill upon which Third Street descends/ascends allows for a context sensitive solution to getting bikers off the sidewalks, which is very dangerous and technically illegal on Third Street. Since bikers can almost keep pace with cars traveling downhill, the plan was to use sharrow markings for the downhill (north bound) lane indicating the travel lane is a shared space for cars and bikes. Conversely, since bikers are slower climbing uphill, the plan called for a dedicated bike lane to add safety for cyclists and the relatively faster automobiles headed uphill (south bound). The end result is a street cross-section that combines sharrows and a bike lane, while preserving the essential on-street parking. 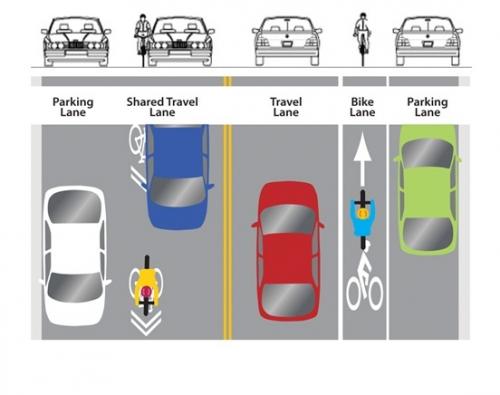 It is to be expected that new lane markings, like those on Third Street, will take some people by surprise. Some individuals interested in traveling quickly through the corridor could even be downright upset about the change. However, if the goal of community planners is to create a mixed-use district where retail, restaurants, and other service and commercial businesses flourish, the priority must be to create an environment where people have convenient and safe access to storefronts, not an environment where wide travel lanes and little bike and pedestrian infrastructure has the effect of moving automobiles past those businesses quickly.

Michigan State University Extension helps communities learn how to improve their social and economic appeal to create and retain jobs. Community leaders are given the tools they need to have a positive effect on their cities, villages, townships – and the whole state.

Planning and zoning for solar in Michigan