Fruit and vegetable growers in the southern Lower Peninsula should be scouting for brown marmorated stink bug this season.

This is the first weekly report of the Michigan State University Extension brown marmorated stink bug (BMSB) monitoring network. For the last 3-4 weeks we have been monitoring more than 80 sites for BMSB nymphs and adults using pyramid or Rescue style traps baited with Agbio lures. Traps are set up near apples, stone fruits (peaches, plums and sweet and tart cherries), blueberries, grapes, strawberries, a variety of vegetable crops and at several urban locations considered to be hotspots. So far we have captured a total of 30 BMSB, the majority of which came from some vineyards early in the season in southwest Michigan.

We have been encouraging growers in the southern part of the Lower Peninsula to scout for this pest this season – if they haven’t in the past – based on where we know it to be well-established as a nuisance pest in homes (Figure 2). Traps are easy to deploy and check, but the area of influence for a single baited trap appears to be relatively small. Therefore, it is important to place them near the crop and to combine trapping with other sampling methods such as limb-jarring of fruit trees or sweep-netting in orchard edges close to woodlots and/or riparian areas. Visual inspection of orchard edges for the presence of fruit injury, or for the insects themselves, is recommended, especially in Berrien, Kent and Genesee counties where several commercial apple and peach orchards reported suspected damage by BMSB last season and where nuisance reports have been high.

Damage to fruit from BMSB feeding can be confused with several disease or nutrient deficiencies, depending on the particular fruit that is affected, so it is important to involve your local MSU Extension fruit educator to help determine what caused the damage or to send samples to MSU Diagnostic Services.

For more information about management strategies in fruit should populations reach levels that would require control, please refer to the MSU Extension Bulletin E0154, “2016 Michigan Fruit Management Guide.” To learn more about how to monitor for BMSB, distinguish it from other similar-looking stink bugs and what plants it favors, visit MSU’s Brown Marmorated Stink Bug website. 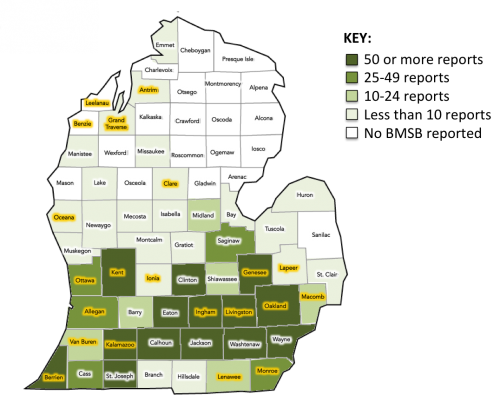 Figure 2. A map of Michigan’s Lower Peninsula showing the extent to which brown marmorated stink bugs have become established as a nuisance pest (shaded from darkest to lightest, representing most to least nuisance reports) and the counties (highlighted in yellow) in which MSU Extension is monitoring for BMSB in 2016. Reports come from those submitted by citizens to the Midwest Invasive Species Information Network since June 2016. Counties being monitored in 2016 are Allegan, Antrim, Benzie, Berrien, Clare, Genesee, Grand Traverse, Ingham, Ionia, Kalamazoo, Kent, Lapeer, Leelanau, Lenawee, Livingston, Macomb, Monroe, Oakland, Oceana, Ottawa and Van Buren.